The Knight Parade in Ybor City was added Wednesday to the list of cancellations. 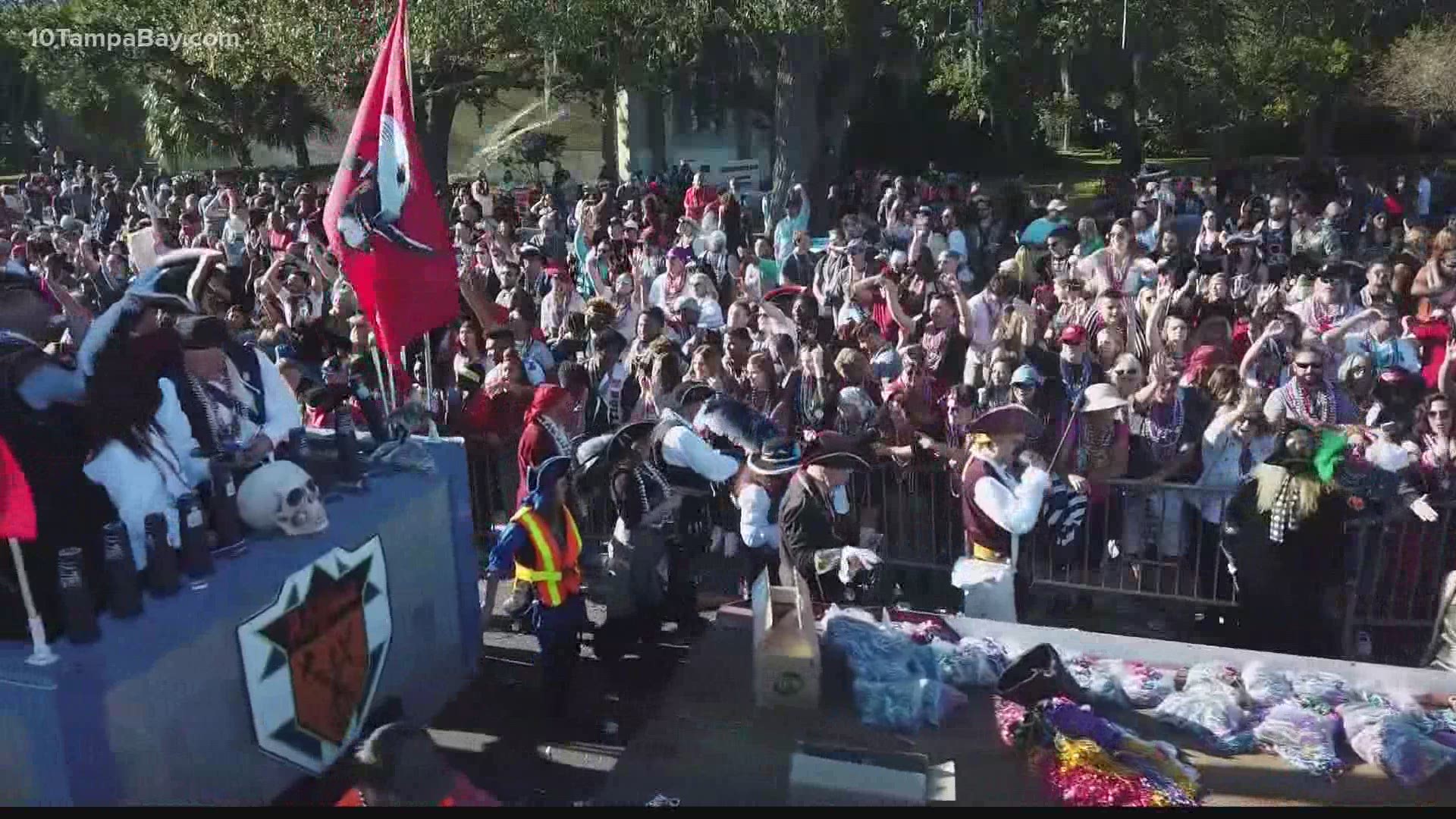 TAMPA, Fla. — Tampa's signature Gasparilla parades, which had been postponed until April 10 and 17, have now been canceled altogether. And, the Knight Parade isn't happening this year either.

Ye Mystic Krewe of Gasparilla (YMKG) and EventFest made the announcement Tuesday morning.

"Only a handful of times did our daring pirate invaders decide to spare the city from invasion due to unprecedented world events. This year, our pirates are making a similar decision to remain offshore and table their invasion plans until the seas calm," Ye Mystic Krewe wrote in a statement.

Organizers say the decision came as part of an ongoing discussion with city leaders and Tampa-area health care experts.

"We hoped to safely and effectively hold Children's Gasparilla presented by Chick-fil-A Tampa Bay and Seminole Hard Rock Gasparilla Pirate Fest, but believe it is our community's best interest to refrain from hosting festivities this year," Ye Mystic Krewe of Gasparilla Captain Peter Lackman wrote in a statement. "The pirate invasion will continue in 2022, with the excitement and revelry that Tampa Bay has come to know and love."

“We have worked with Ye Mystic Krewe of Gasparilla, EventFest and other community stakeholders to try and determine a safe way to host up to a half of a million scallywags along the Gasparilla invasion and parade routes. Alas, there was no secret treasure map containing the golden solution, so the Krewe made the decision, in the best interest of our community, to cancel this year’s festivities," she wrote.

The mayor said the cancelation will give the city more time to "batten down the hatches and roll out the cannons," as she believes the pirates will be back for more than just a key to the city next year.

The Krewe of the Knights of Sant’ Yago has also canceled the 2021 Knight Parade in Ybor City.

“We’ve worked closely with the City of Tampa and the parade’s presenting sponsor MOR-TV to assess the potential health risks to the community,” said Ken Willis, Krewe of the Knights of Sant’ Yago member and 2021 parade chairman, wrote in a news release. “Our Board of Directors has decided it’s best for our community to cancel this year’s parade, and plan to celebrate safely in 2022.”

The cancellation of this year's Gasparilla-related festivities is not the first time it's happened in history.

"Over the past 107 years, parades were not held for numerous reasons, including when the city had limited public celebrations or during wartimes," organizers wrote.

Ye Mystic Krewe of Gasparilla did leave good news for those sad to see the tradition, so to speak, walk the plank this year. Gasparilla parades are set to return next January with the children's parade slated for Jan. 22, 2022, and the main event on Jan. 22, 2022.

Organizers are now targeting Feb. 12, 2022, for the next version of the Knight Parade.

Anyone who purchased a ticket for this year's Children's Gasparilla and Gasparilla Pirate Fest is eligible for a refund or a roll-over credit on their account for 2022.

Those who choose to keep the credit on their account will also receive an additional 15 percent bonus that can be used to purchase additional tickets or merchandise, according to a press release.

A third option is available to those who wish to donate the cost of their 2021 tickets. The proceeds will go to Ye Mystic Krewe of Gasparilla Community Fund, "which supports scholarships for exceptional high school seniors in the Tampa Bay area, community food programs, and more."

Ticket holders will be contacted, but can also reach out with questions by email or phone to office@eventfest.com or 813-251-8844.