Children and parents lined Bayshore Boulevard on Saturday for the great time at the Gasparilla Children's Parade. 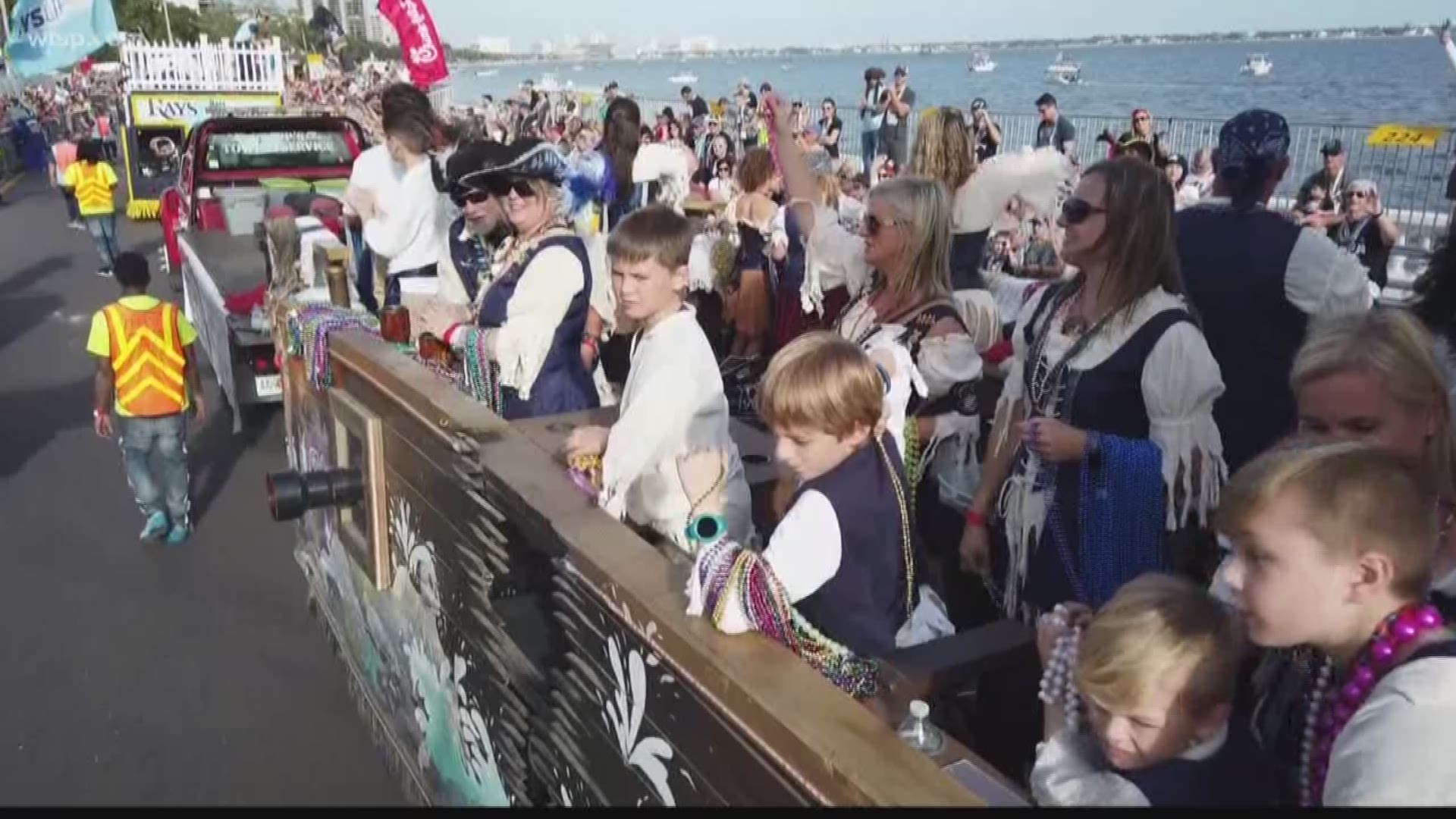 TAMPA, Fla. — Shiver me timbers! Pirates from across the sea took over Bayshore Boulevard in Tampa on Saturday for the Children's Gasparilla Parade.

Avast, it's likely time to batten down the hatches and take a nap for those little pirates now.

Just as the kids gathered their sea legs, the parade began at Bayshore and Bay to Bay Boulevards at 3 p.m. with floats stretching as far as the eye could see.

That meant more booty for the pint-sized pirates to get their hands on. Of course, booty in pirate language means treasure, and the treasure at Gasparilla is beads.

"I had a lot of beads and it was really fun catching them!" shouted first timer, Kylie, over the music that seemingly shook the street.

Kylie was one of hundreds of children reaching every which way for a chance to add to their ever-mounting collection of beads.

"My favorite part is all the beads and spending time with my friends, and we're doing a competition on who will get the most beads!" added another pirate-in-training, Presley Gomez.

While beads flew through the air, the floats on the ground had the kids just as excited.

No parade is complete without Elmo, who came all the way from Sesame Street to enjoy the festivities. Mascots from the Tampa Bay Rays, Lightning, and Buccaneers were all in attendance as well.

"When the Lightning came and they threw all the beads, it was awesome," Katarina, another future pirate, said.

While this parade was for the kids, the parents were not left without any fun. Seeing the joy on their little one's faces was enough for all.

"It's amazing, it's just so great to see these two here just enjoying the activities and festivities," said father of two, Thomas Kryston.

With a pirate invasion imminent, Mayor Jane Castor was also there to ensure smooth sailing.

"Gasparilla is a tradition that somewhat defines our community and the children's parade is something that I grew up with," Castor said just before the parade kicked off. "So, it's just so nice to see all the families out here having fun, perfect weather, so it couldn't be any better."

With so many notable faces at the event, one stuck out above the rest, both figuratively and literally.

Towering above anyone in sight was the parade's Grand Marshal, WWE superstar the Big Show, also known as Paul Wright.

"I got to see the kids and the kids are in their little costumes, and they're all excited. For me, that's the part that I'm excited about is to see the kids. That's one of the unique, I guess, joys and perks of the job and being a WWE superstar is seeing kids interact, and I love that!"

The night was capped off with a show of epic proportions, both in the sky and on the bay. Those who stuck around were treated to an airshow that featured fireworks coming from the plane, and a light show on the famous Gasparilla Pirate Ship as it floated along Bayshore Boulevard.

Next week's main Gasparilla Pirate Festival is sure to be just as exciting, with another WWE superstar in attendance.

"I heard next weekend is supposed to be my friend Dave Bautista doing that, so 'The Animal' can enjoy all of that craziness and I'll stay right here with the kids," said the Big Show.

And he's right, Bautista will serve as Grand Marshal for the main parade next weekend.

If you're planning on going, be sure to stay in the know by clicking here.