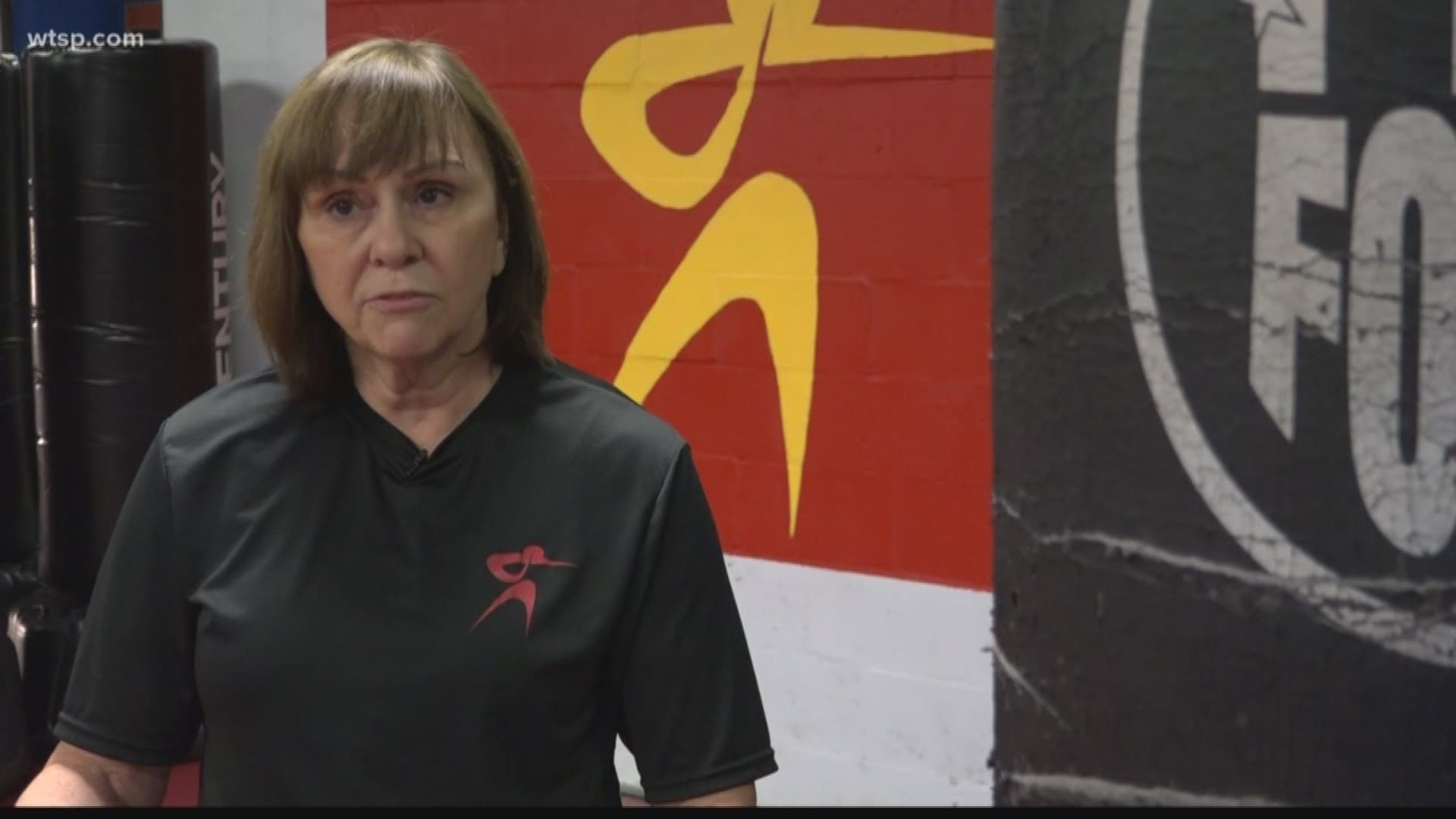 SEMINOLE, Fla. — Pam Laubach slipped on a pair of sparring gloves and took her place in line among taekwondo students a quarter her age.

Dressed in her newly-earned black belt, the 61-year-old stepped face-to-face with a former world champion and smacked his padded hands with precision and poise.

After a few punches and kicks, she took her place in the back of the line and waited for another chance.

She never expected to be here, much less wearing a black belt.

“A silent fighter,” she said, attempting a self-assessing adjective. “In my own mind.”

Her humility is honorable but if you ask the rest of the room, there’s no doubt she’s a fighter.

“Is it common for a 61-year-old to earn a black belt? No,” said Jim Graden, who runs Jim Graden’s Martial Arts and Fitness where Laubach trains on Monday nights.

Graden was a world kickboxing champion in 1991. He’s trained fighters all over the world. Few pupils look and act like Laubach.

Following Graden’s prompts, Laubach flashed punches and kicks at the air while staring into her reflection in the mirrors on the wall. The look of determination in her eyes revealed the truth – she’s a born fighter.

About a dozen students joined Laubach in her class. They went through a series of drills and exercises while wearing different colored belts. Laubach was one of the few dressed in a black belt. She joked that it was still stiff. It was the first time she tied it since earning the highest martial arts honor just four days earlier.

“It’s a little stiff now, but hopefully I’ll wear it in,” she said.

Earning her black belt was just another example of her fighting spirit. That spirit led her to beat breast cancer twice.

Her first battle came in 1999. It reoccurred in 2010. Laubach felt uneasy during a workout while laying on her side and went to get checked out.

Her cancer was Stage 4 this time.

The cancer had attached itself to her lung this time. She had nearly two liters of fluid removed from her body and endured more painful treatments.

“When you have it the second time, your chances are not as well as just having it once,” she said. “I thought, ‘This one, I’ve got to fight hard’. I decided I wasn’t going to be a victim.”

After a few chemo sessions, her oncologist came into the hospital room shaking his head. He was holding the results of her latest pathology report. It was clear. He couldn’t believe Laubach had beaten cancer again.

“I decided I wasn’t going to be a victim," she said.

To earn the black belt, Laubach, one of the oldest in Graden’s classes, broke a wooden board on a blind jump turn kick. The gathered students cheered. A smile spread across her face.

“I don’t think I’ve ever been more proud of Pam,” said Graden.

Graden has taught martial arts in Seminole for over three decades. His studio is located at 9104 Seminole Blvd.

RELATED: More than $1.3 million raised after Miles for Moffitt; join the 10News team!

RELATED: Pancreatic cancer survivor: 'You can get through it'