Determined to adopt: A family's mission 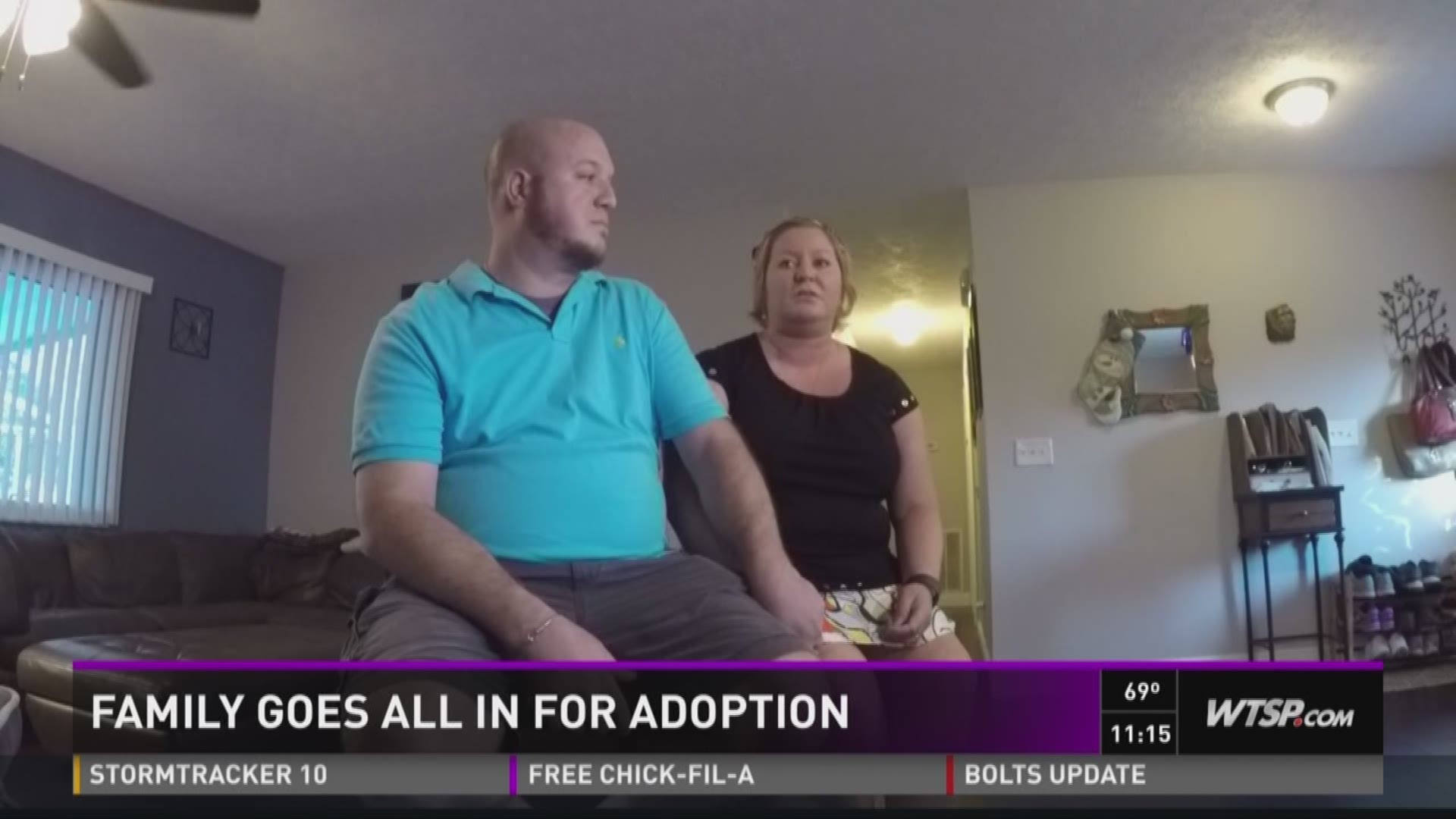 RIVERVIEW, Fla. - It’s not fair to have to endure the worst day of your life twice.

But that’s what happened to Holly and Brian Festa.

“It almost felt like it was going to happen,” said Holly. “You felt that just because you’ve lost one child you fear it so much and what could be. The one thing that could happen to a healthy kid and it’s SIDS.”

The Festas lost Adelyse Sawyer Festa on Jan. 5, 2016. She was healthy and happy, just a day shy of three months old.

“Frantic,” recalled Brian when describing the phone call he got to receive the news. “Disbelief.”

Addy, as they called her, died of Sudden Infant Death Syndrome in the crib at her daycare. It was devastating for both parents.

“It was a complete shock,” said Holly. “It’s my worst nightmare. It’s the one thing I feared the absolute most.”

This, just 18 months after the Festas also lost their first child, Sawyer.

“We feel like it’s very, very unfair,” said Brian. “We always say, ‘Why us? What have we done?’ It’s made us stronger as a couple."

Sawyer died after just four days due to undeveloped lungs. Her parents were able to take her pictures in the hospital after she’d passed away. They cherish them to this day.

Holly’s sister, Heidi, made a website for Sawyer at the time of her death. The site asked people to take a photo of them writing Sawyer’s name and to pass it along to them for a scrapbook. The photo campaign went around the world.

Heidi says the loss of Sawyer prepared her sister for the loss of another baby, if that's possible.

“It has been incredibly tough but Holly has channeled all of her sadness into her next step,” she said. “I’ve always wanted Holly and Brian to be parents.

“Two solid years of sadness and I feel like the clouds are parting and the sun is coming out and it’s because of them and their attitude and positivity.”

The next step is adoption. For months, Holly and Brian, both teachers, have worked feverishly to make extra money. They work, sometimes, 80-hour weeks between their school jobs, yard sales, jewelry sales and Holly’s latest project – painting parties.

“It’s my therapy,” she said with a big grin on her face from the back room of an Apollo Beach Beef O’Brady’s restaurant. A room full of eager painters watched her detail how to paint a festive, colorful glass on a black canvas.

The painting parties she hosts, usually at one or two local businesses or people’s homes, have helped the Festas accumulate the lion’s share of their money that they plan to put toward adoption. So far, they have about half of the required $30,000.

“We want to build our family,” Brian said while sitting in the couple’s new living room. They moved out of their old house because it “didn’t feel like home anymore”.

The best news of all came in the fall. The Festas have been matched with a mother who is due to deliver a baby boy on April 17.

A new chapter will begin in their lives. After all of the sorrow, determination is driving them towards a new beginning.

“Chaos. I want chaos,” said Holly, both smiling and wiping tears away from her eyes. "Chaos is what comes with children."

The couple has been in contact with the mother of the child they plan to adopt through text messages but have not been to any doctor appointments. One of the joys they shared in the process was getting to see a mobile sonogram image of the baby boy.

They also plan to continue to pursue biological children within the year.