Elena Kapepaneas has set up shop on the Pinellas Trail in an old-school Florida boxcar. 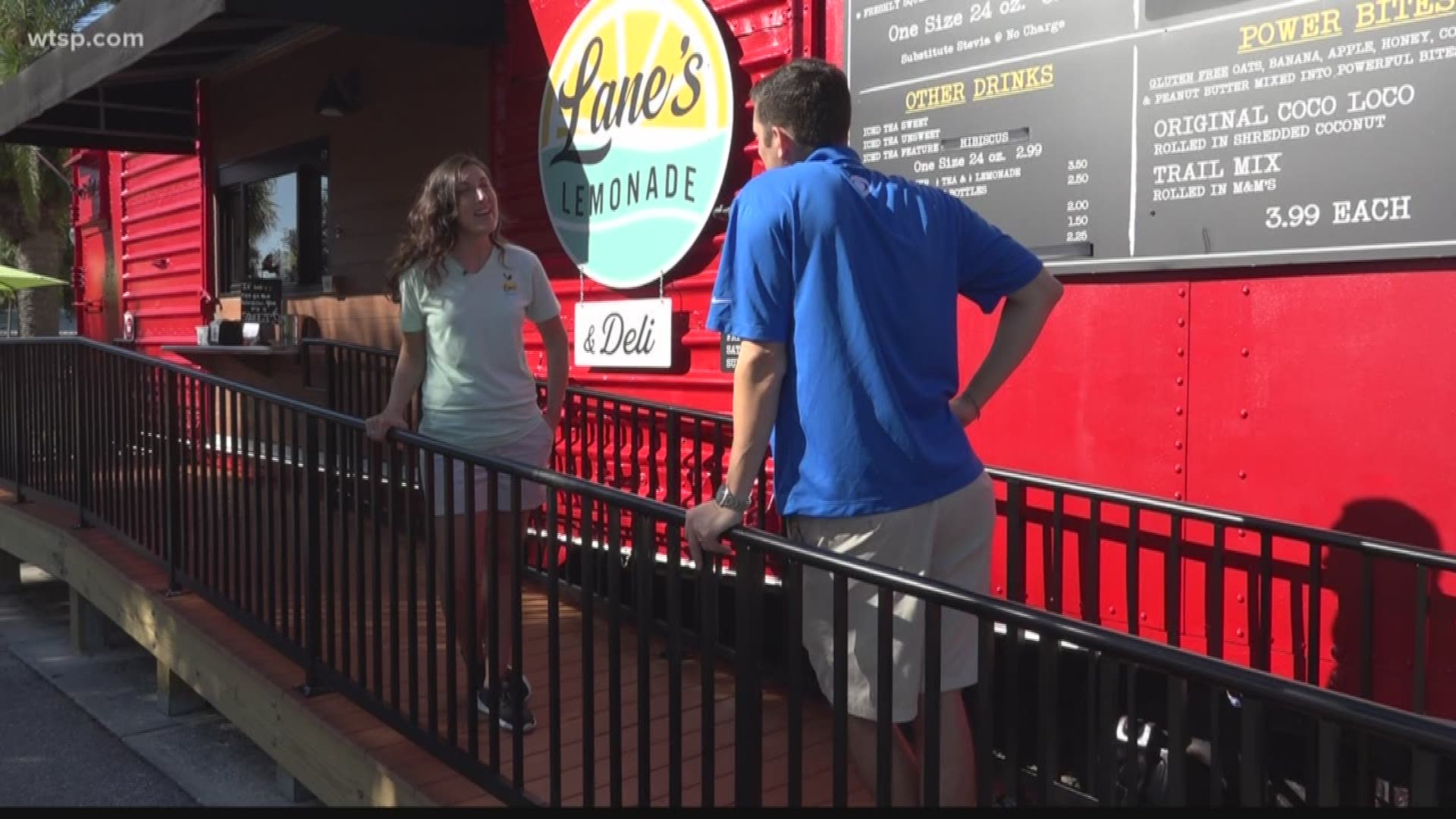 DUNEDIN, Fla. — Elena Kapepaneas quickly sliced citrus for a familiar face. A long-time customer of hers from a previous business made the walk down the Pinellas Trail to see her in her new home – a hard-to-miss bright red boxcar with a giant lemon on the side.

“I’m Greek, so we love lemons,” she said with a smile and joking tone as she squeezed fresh juice. “Who doesn’t love lemonade?”

After years of creating upscale coffees just a block away on Main Street, Kapepaneas sold her java business three months ago to begin work on a new project called Lane's Lemonade.

She, in partnership with the Dunedin History Museum, is selling juices and sandwiches from inside the boxcar connected with the museum. The business idea is young – she only opened in late September – but it’s growing quickly.

“We have a lot of regulars from the coffee shop Elana used to run,” said Ashlynne Barnes, who has worked with Kapepaneas for years. “The lemonade and limeade, almost everyone grabs one. They’re so good.”

Kapepaneas has always loved her hometown. The Dunedin native remembers taking walks with her mother around Main Street.

The boxcar sits just off Main now, parallel with the Pinellas Trail. Bikers and walkers from up and down Pinellas County stopped to sip on her limeades and orangeades just after she opened her window for business at 10 a.m.

The line never really died down.

“Oh, it’s excellent,” said Raimond Konomi, who dropped by the boxcar to give Kapateneas a gift.

“This is the best. Like homemade," his wife said, agreeing.

The historical connection with the juice business is unavoidable. In 1888, Peter Demens build the first railroad through Dunedin as part of the Orange Belt Railway that stretched from Sanford to St. Petersburg.

Although the train transported passengers, its primary source of income was citrus shipments. Tragedy struck both industries when, during the Great Freeze of 1894-95, crops were destroyed throughout much of Central Florida and the railway became bankrupt due to lack of cargo.

“Everything comes back around,” said Barnes, who favors Lane’s limeade with a flavor boost from fresh strawberry.

The bright lemon sign and menu board catch bikers’ and walkers’ attention as they make their way north and south on the Pinellas Trail. Many stop for a sip of something sweet. The Florida coast has a citrus history that dates back over a century and Kapepaneas is pleased to be adding her own special twist.

“When I was a kid driving around, there was a lot of orange groves still. Now, you don’t see that often, but it is nice to bring some of that back,” she said. “Being able to serve fresh food and quality ingredients is important to me.”

Kapepaneas actually eyed the boxcar for business eight years ago and it was not available.

She is eager for the return of “snowbirds”, part-time Florida residents from northern states, which boosts the population in Dunedin every winter.

She serves 24-ounce drinks, sandwiches, and snacks. Check out her menu online.

“I hope this becomes a place where kids ask their parents, ‘Hey, can we stop by Lane’s to grab a lemonade before the park.'"