Scott Earnhardt served in the military for more than 22 years. He's now serving fellow military by taking them underwater to fight PTSD. 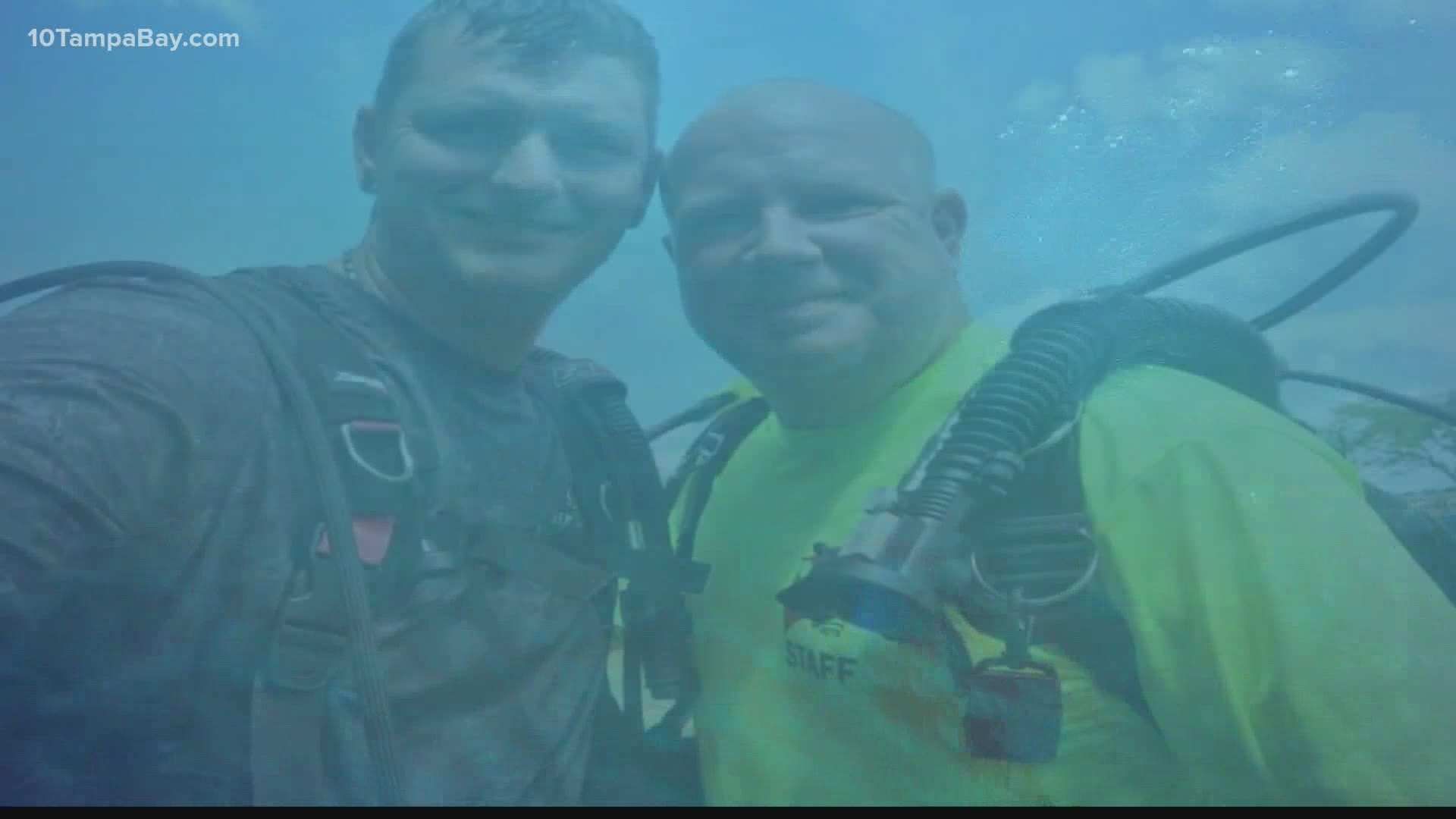 TAMPA, Fla. — Editor's Note: The following story includes a reference to suicide topics. If you or someone you know is struggling, there is help. The National Suicide Prevention Lifeline can be reached 24/7 at 1-800-273-8255.

Scott Earnhardt will never forget Dec. 17, 2013. It was the day his suicide attempted failed.

“I pulled the trigger, but the Lord moved the gun,” he said.

The Mississippi native went through inpatient treatment and anger management. He was looking for help dealing with the mounting stresses from his life in the military.

“It scared the crap out of me enough to do what I’m doing now,” Earnhardt said.

Four years ago, the Army veteran of more than 22 years found the peace he was looking for underwater. Earnhardt, along with two other military buddies, Joe Kelly and Craig Clound, started Dive 21, a nonprofit that gets people facing PTSD out on diving trips around Florida. So far, about 60 people have been impacted by the outreach. Most of them are veterans.

“I like to say it’s the closest you’re going to get to outer space without spending millions of dollars because that is an alien world,” Earnhardt said, gesturing to the crashing waves behind him. “Sharks are the best thing in the world but they’re not going to mess with you. Then you look over and you see an octopus. Then you look over here and you see a pufferfish. Then you see a lionfish and it’s all engaging to you.”

Kelly was a member of the 82nd Airborne. Clound is a Marine. Earnhardt was a member of the U.S. Army Special Forces, Green Beret. The trio spent decades in service to their nation in conflicts like the Gulf War. They chose to name their non-profit Dive 21 because of their desire to bring awareness to the 22 veterans who commit suicide in the United States every day. The Dive 21 mission is to “save one, one dive at a time,” hence the 21 rather than 22.

“We never quit serving,” he said. “We feel that passion and drive to help. That’s why you join the military, to help.”

The outreach is growing slowly. Dive 21 operates out of local dive shops in Tampa Bay, Key West and West Palm with plans to add another hub in the panhandle. Everything they do is made possible through donations, including trips and equipment. Word of mouth has been their key method of attracting more divers in need.

“A lot more people are hearing about us and we’re being contacted, which is the goal,” he said. “What makes Dive 21 different is we focus on the instructor. We make the instructor to where he can deal with and work with someone who has a traumatic experience.”

Earnhardt wants to see their dive numbers grow exponentially and eventually stretch from coast to coast nationally. That way, more veterans contemplating suicide may find a constructive outlet for their trauma.

“We’ve been at the brink. We sat that and drank ourselves stupid,” Earnhardt said. “If we can get one, we consider ourselves successful because we’re not going to leave anybody behind.”

Dive 21 has the capacity to take 500 people on trips each year. The non-profit decided to extend dive opportunities to anyone with a traumatic experience, not just veterans, including first responders.

Dive 21 is fully supported by donations. You can contribute to funds that will help veterans make dives at htp://www.underpressuresports.com/ or https://www.bluedescentdivers.com/

“We do not let money become an obstacle,” Earnhardt said.