Davey and Judy Reed say fitness "saved both our lives." 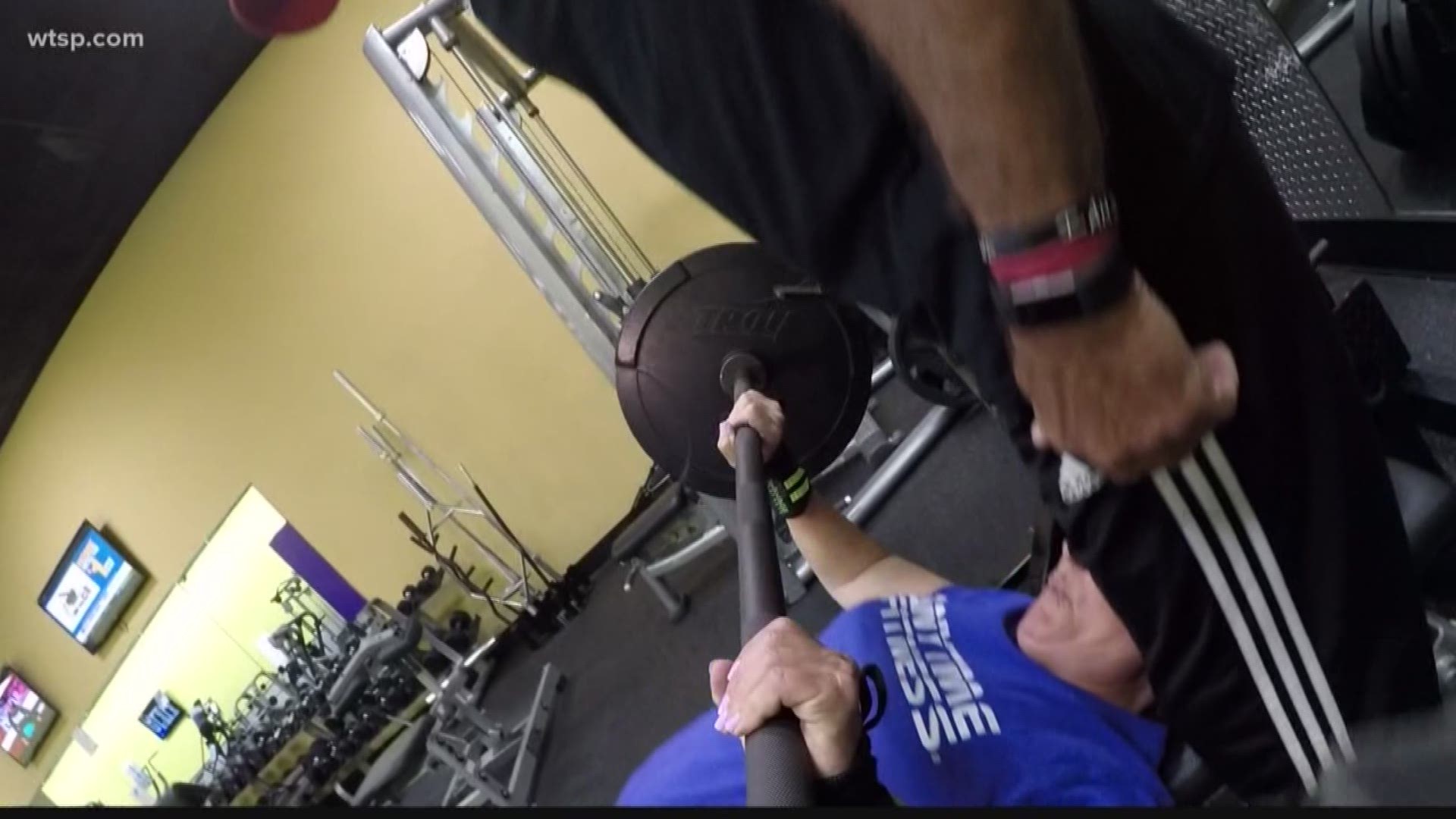 AVON PARK, Fla. — Judy Reed wrapped the green and black support straps around her wrists as she prepared to hoist another impressive amount of weight.

“You ready?” asked her husband, Davey.

The powerlifting couple, both 72, has been a regular sight at the Anytime Fitness location off State Road 27 in Avon Park for years. They come to work out a few days per week and typically draw a crowd.

“She’s absolutely unbelievable. She is my hero, bottom line. My earthly hero,” Davey bragged. “People think I’m bragging. I am.”

Judy calmly grasped the bench press bar as Davey spotted her lift. She extended her arms, dropped the bar to her chest, and lifted 135 pounds back toward the sky. She let out a little breath of relief and set the weight back down. The load was just six pounds shy of her body weight.

It was her largest lift of the day.

“It’s been fun. We get to work out together and it’s quality time,” said Judy, who only started lifting a decade ago after her doctor recognized the beginning stages of osteopenia -- it's a condition where the body's bones aren't as strong as what they used to be.

“I didn’t want to go on medicine.”

Instead, she turned to weights. Lifting is an activity that can help curb bone density is an issue with aging Americans.

“They’re a huge inspiration to our members,” said Anytime Fitness manager, Leanna Cedola. “They come into the gym and they want us all to know how important this is.”

Davey has been lifting for 50 years. An athlete his entire life, he is also a world-class softball player and even writes for Softball Magazine. When his wife finally joined him in the gym, he was elated. Her overall health has benefited greatly. Judy no longer suffers from bone density problems.

“It was either (lift) or have a really tough life at an older age,” he said.

Judy set a world record in her first competition back in 2017. The event fell on her 70th birthday. In February of this year, at the APF Florida State Championships, she bench pressed 121 pounds and deadlifted 142 pounds. On Aug. 16, at the AAPF National Championships, she set a world record with a 259.6-pound deadlift. Lifters from 11 countries were represented by 151 competitors at the world event in Orlando.

Judy was the second-oldest woman to lift.

“The judges even said they didn’t think she was going to make it,” said Davey, who won in his weight class at that event with a 369-pound lift. “Weight for weight, it’s mind-boggling for me.”

Judy benched eight reps at 105-pounds before transitioning over to a deadlift workout Monday morning. She joked between exercises that her daughter, who coaches water polo in California, uses mom as an example for her athletes when they get tired.

She let out a little chuckle at the thought.

“It wasn’t even in my realm,” she said of becoming an athlete.

She clearly is, easily doing three deadlifts at 205-pounds. A friend, Tony, watched from the corner of the gym in amazement. The woman who never expected to become an athlete is now impressing others. Judy’s goal is to deadlift 300 pounds.

“We’re extremely impressed,” Cedola said. “Every time we see them, we are amazed.”

The Reeds are done competing for 2019 but are preparing for events in February. They hope to place well enough to earn a way to top lifting competitions in Ireland next year.