Over 10,000 homeless veterans have been helped by New Beginnings of Tampa since its inception. 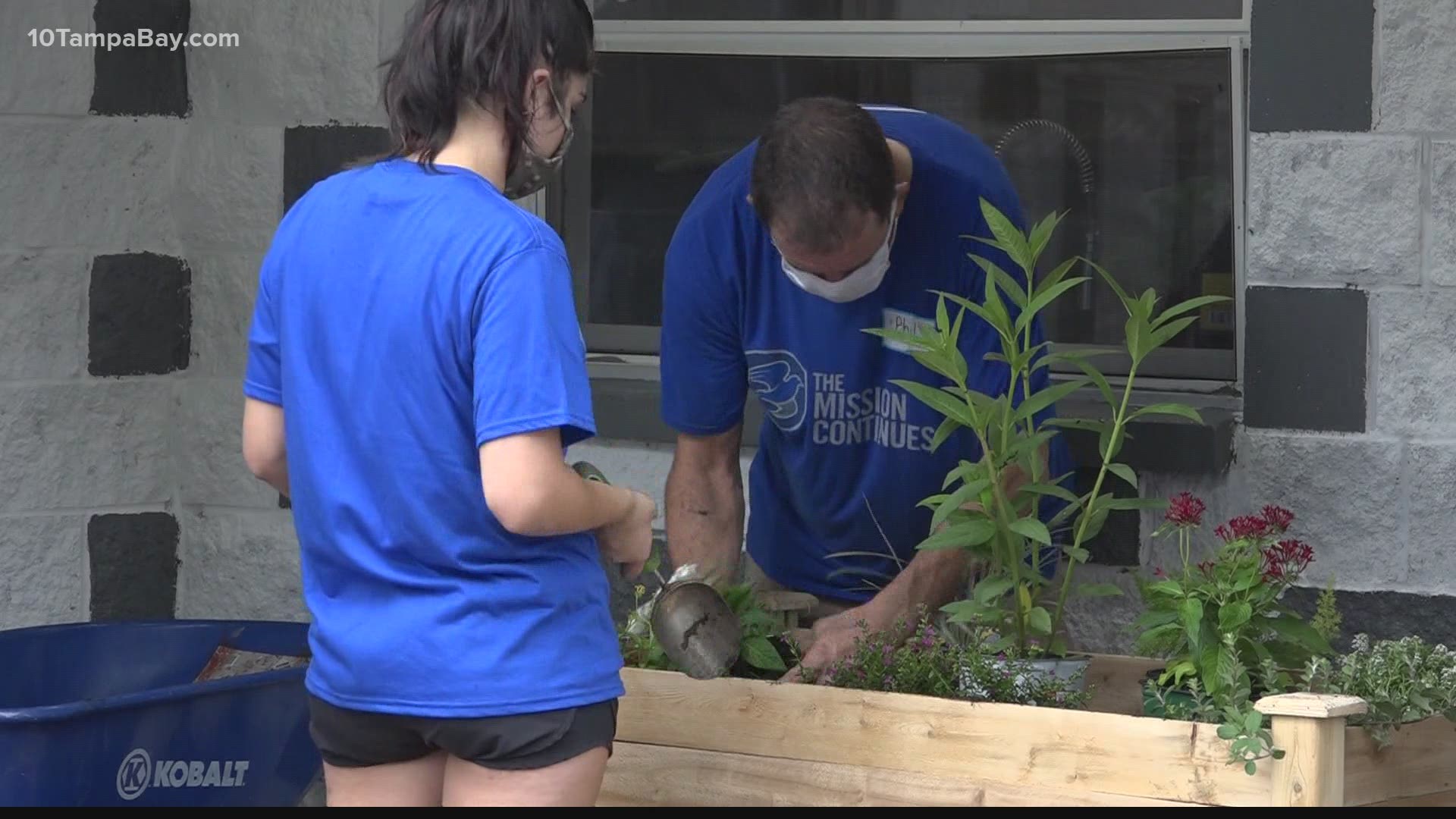 TAMPA, Fla. — Michael Medlock can admit now that it took him almost a week after moving into his new home to finally get some sleep.

Taking care of veterans in need was a no-brainer for him.

“Sometimes they just need a little bit of caring, a little bit I’ve been seeing that there’s hope in their life,” said the pastor. “They get their life back.”

“One day as they watched a homeless woman leave church with her food box in hand, Tom and Ginny realized that giving out food provided some temporary relief, but it did nothing to solve her deeper problems,” reads the New Beginnings of Tampa website. “From that day on, they were consumed with a passion to do more and to really help people transform their lives.”

It’s taking shape with the help of Habitat For Humanity Hillsborough, which provided a few socially-distanced volunteers on a rainy Veteran’s Day morning to help spruce up the New Beginnings' grounds.

Around 70 people live there after falling on hard times after trying to reintegrate from a life of military service. New Beginnings offers shelter, three meals per day, and help finding jobs and a more permanent home.

“Ten percent of the homeless population in Hillsborough County are veterans. We believe the number is higher because a lot of veterans don’t want to identify as a veteran when they’re homeless,” said Habitat’s Nitza Rivera. “Any place that they can feel welcome and feel at home, we definitely want to support.”

It’s estimated 22 veterans per day commit suicide nationwide. Having safe places to go like New Beginnings of Tampa helps cut down on those numbers. The outreach has helped over 10,000 veterans in nearly two decades.

“I've been told for years, ‘Thank you for your service’ and it's like, sometimes, you know, you really think about it sometimes and it does almost brings tears to my eyes,” he said.

Habitat helped put up a new roof and build picnic benches this month on the property off Seneca Avenue in Tampa. Around 70 veterans live on site. Some are there only a few weeks. Others stay for up to a year.

All leave knowing they’re loved and cared for.

“They can see that somebody really cares for them and that’s a big motivation for them to do the right thing,” said Atchison.

Dr. Atchison received the Community Hero Award from the Tampa Bay Lightning for his work at New Beginnings of Tampa.

Since its inception, New Beginnings has helped over 10,000 homeless persons recover and transform their lives. As families are re-united, there are often children who have been affected which is an area of special concern.

Therefore, New Beginnings is launching a Youth Mentoring Program to build strong, trusting relationships, positive attitudes and life skills for at-risk children. In the tradition of its founders, New Beginnings continues to operate the Hunger Relief Program which distributes nutritious food to struggling families and the homeless who are still living on the streets.

RELATED: Veterans team with Florida Aquarium to get new corals on ocean floor

RELATED: Student with heart transplant gets warm welcome back to virtual school