The homeless men and women who gather at The Refuge outreach church are just happy to have a community to call their own. 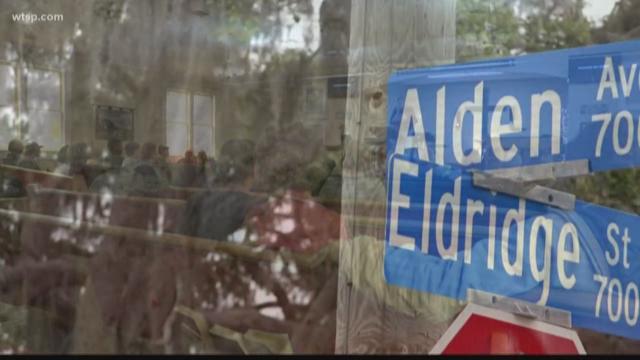 The sound of uplifting music is always floating through the air at the corner of Alden Avenue and Eldridge Street in Clearwater. Typically, Christian music lands on the ears of some of the people community members would consider the “least of these."

The homeless men and women who gather at The Refuge outreach church are just happy to have a community to call their own.

“It saved our lives,” Janet Heatherington said while seated next to her friend, Barbara Samson. “If you need a shoulder to cry on, there is always someone there.”

She’s not exaggerating. The building, which was once home to the Mount Zion United Methodist Church, is about 100 years old. It sat dormant and broken across the street from undesirable housing in an even less desirable area of Clearwater for years.

The homeless population grew in the area. The need to help that needy community grew with it.

That’s why Shaun Powers bought that crumbling old church in 2016.

“The Lord really put on my heart at that time that we needed to find a church that we could open up for the homeless that they could come every day and they could call their own church” he said while seated next to his wife, Michele, on the front stoop of The Refuge. “It took a little time, but eventually it made itself available.” 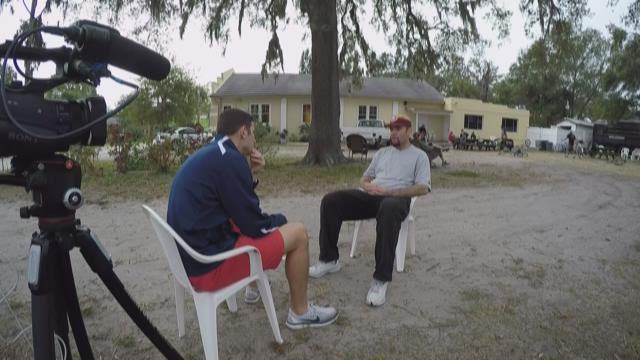 It took time and Shaun’s money. As he tells the story, $50,000 from a retirement account “accidentally” was transferred to his checking account around the time he offered the same sum of money to acquire the property. The couple eventually was handed the keys to an old fixer-upper without a plan in mind.

“We’ve got a lot of blood, sweat and tears into this place,” joked homeless man Anthony Reed.

“Mostly blood,” said his friend John Bond, with a chuckle. The two men were some of the first men to show up to The Refuge before it even had a name. 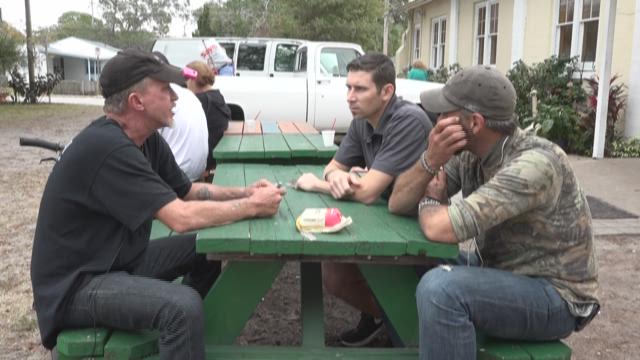 Shaun and Michele stopped by a local food bank to ask the homeless to come help them get their newly purchase church up and running. The next morning, a dozen people were there ready to mop, paint and fix up what now has become a huge part of their lives.

“It was 30 years since the last time that I stepped on church grounds,” Reed explained from a picnic table in front of the church. “The first day I stepped out here, you just had that feeling that it was home. This ground is blessed. Everyone that comes here is blessed.”

Michele sings songs during the 10 a.m. Sunday service and Shaun plays his guitar. A few other community volunteers round out the band and a guest speaker typically shares an inspirational message.

It’s a weekly experience that is boosting the spirits of a community that really needs it. 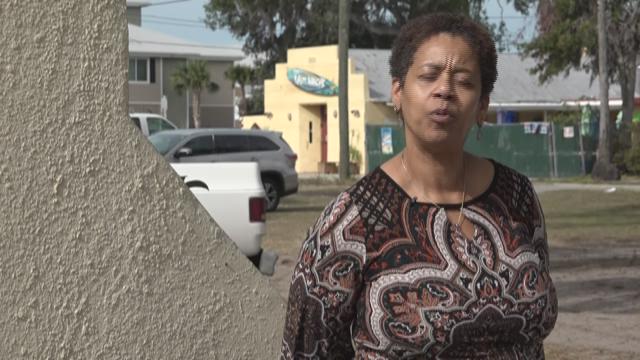 “How did I become homeless? I just gave up,” said Chris Dechick, who spent a year in prison for cocaine possession. “I gave up on life pretty much. That’s how I became homeless.”

The homeless men and women who come to The Refuge all took different paths to get there. Nora Nash was evicted after medical bills mounted to the point where she couldn’t afford her rent. Bond was told to get out of his rental home without much explanation. Joe Gustafson rode his bike from Vero Beach to Clearwater in hopes of a fresh start. He ended up homeless for over three years.

My mother, who is a retired federal judge, claims I’d be dead if I never met Shaun Powers,” he said. I asked if she was right. “Very likely.”

Gustafson’s left arm was confined to a sling after being hit by a bus four-days earlier. It wasn’t the first time he’d been hit. The Refuge helped him find employment, at a food packing facility, and housing. He’s unable to work until his arm heals. Yet, he still shows up for Sunday service and even Wednesday morning Bible studies. 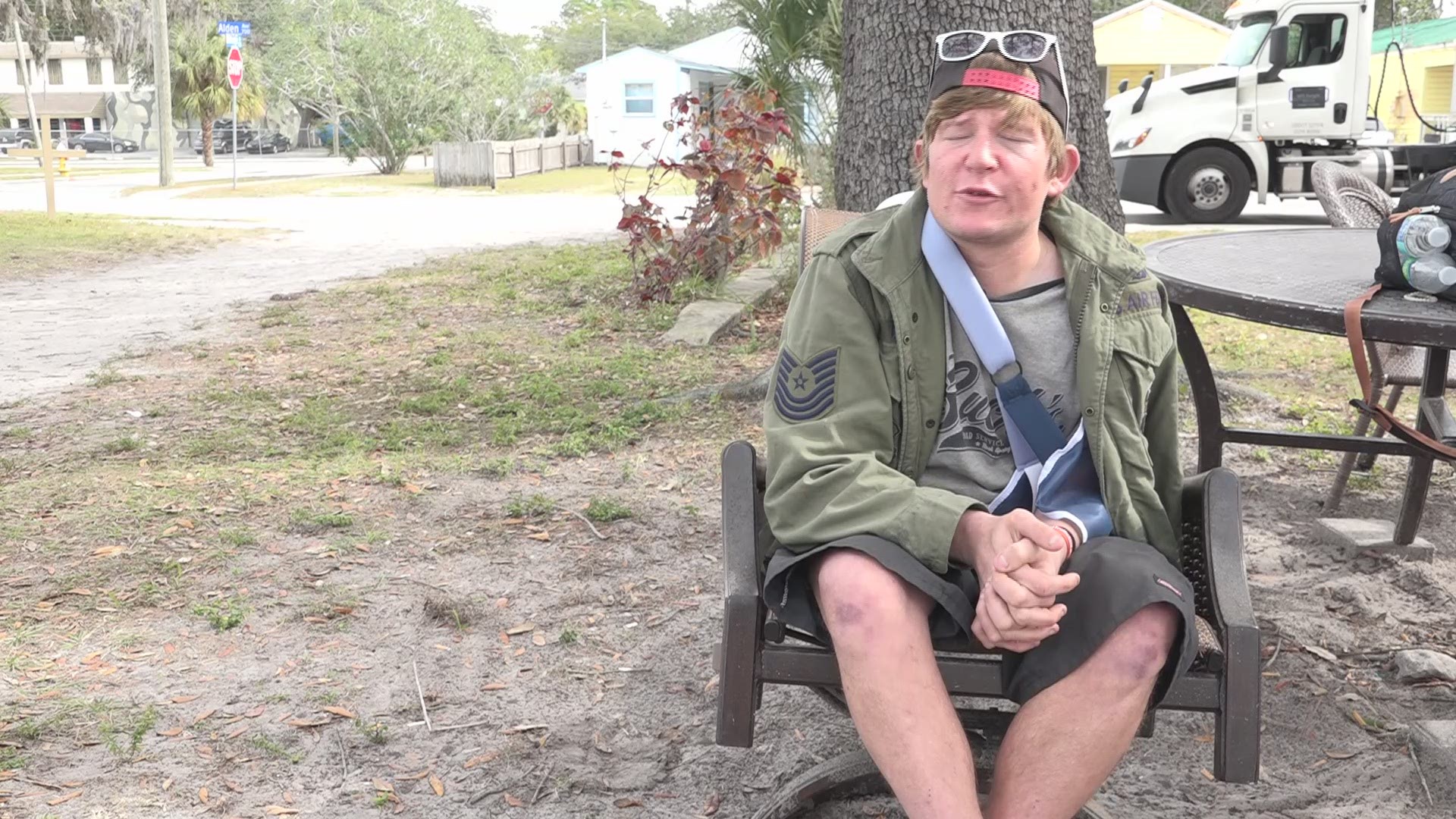 It has been for anyone looking for a new direction away from homelessness. Heatherington spends almost every day at The Refuge. She and dozens more take advantage of the Wednesday laundry days.

Shaun or another volunteer will drive a truckload of homeless folks to the nearby Señor Bubbles coin laundromat to get their clothing washed. Shaun found that the inability to do any laundry was one of the biggest problems homeless people face. The Refuge also helps homeless find jobs, housing and obtain ID cards and birth certificates.

We really didn’t have a plan. Didn’t really have a vision,” he said about starting The Refuge. “Just sharing the love of Jesus was our vision. It was a faith-based ministry.”

The ministry has renewed the faith of the faithless. Many people who come to the outreach church, like Carla Ambrose, didn’t have many other places to go. She was left high and dry by a friend who promised to let her move in once she arrived in Florida from Philadelphia. Instead, she ended up homeless and sleeping in her car.

“I was evicted. I was the product of a slumlord. With an eviction on your record it’s hard to get a new place,” she said. For six months she bounced from friend to friend looking for something safe and permanent. “It’s a family. It’s a home. That’s basically it. It’s a home. It became my home. I walked in those doors homeless with my two boys. It’s my home away from home.”

The Refuge is open from 9 a.m. to 2 p.m. every day. Shaun and some of the homeless men and women he has grown to trust, operate the church daily. It’s all volunteer-based. No one takes a salary from The Refuge. It operates on donations and is in desperate need of funding to keep the ministry going. The homeless community does not bring in much money to the facility, although Michele says there are a few people who will drop a few dollars in the collection on weekends.

She insists, The Refuge will find a way and succeed in its mission to keep hope alive for the homeless.

"For me, all we want as human beings is for someone to love us,” she said. “That love is so unconditional for them because they haven’t had that in so long.”

Reed was an executive chef for 20 years before ending up in jail. Now, he plans to enter a seminary program offered at The Refuge. Bond was stabbed eight times while living on the streets. Now, he has found safety at the church he helped re-build two year ago.

“It means everything to me,” he said, “because if I didn’t have this, I wouldn’t have anything.”

The Clearwater Police Department has designated officers assigned to count the homeless population each month. It helps the agency keep track of the rises or falls of the homeless community. The January 2018 count revealed that there are 78 homeless people living in Clearwater. Many of them are finding a place to gather at The Refuge.

On Jan. 28, a crisp Sunday morning in Clearwater, pastor Joe Walker spoke to the homeless gathered in The Refuge sanctuary. His message was about trusting in God to carry them through hard times.

The words prompted a few ‘amen’ cries and many nodding heads. At the end of each service, everyone in attendance stands in a circle and joins hands for a benediction.

The prayers lifted past the roof, which is missing a few shingles, to help keep the tight-knit community going.

“We have our own third world here in the U.S. and it’s homelessness,” said Shaun. “It’s something that feels right.”

If you’d like to donate to The Refuge outreach church, you can do so at the church’s Go Fund Me account, or personal checks can be sent to the church address: 606 Alden Ave. , Clearwater, FL 33755