To players, USF coach is so much more than impressive 1,000-win record

Ken Eriksen took over as the head coach of the USF softball program in 1997. He hit the 1,000-win milestone April 30 but is more focused on teaching than winning. 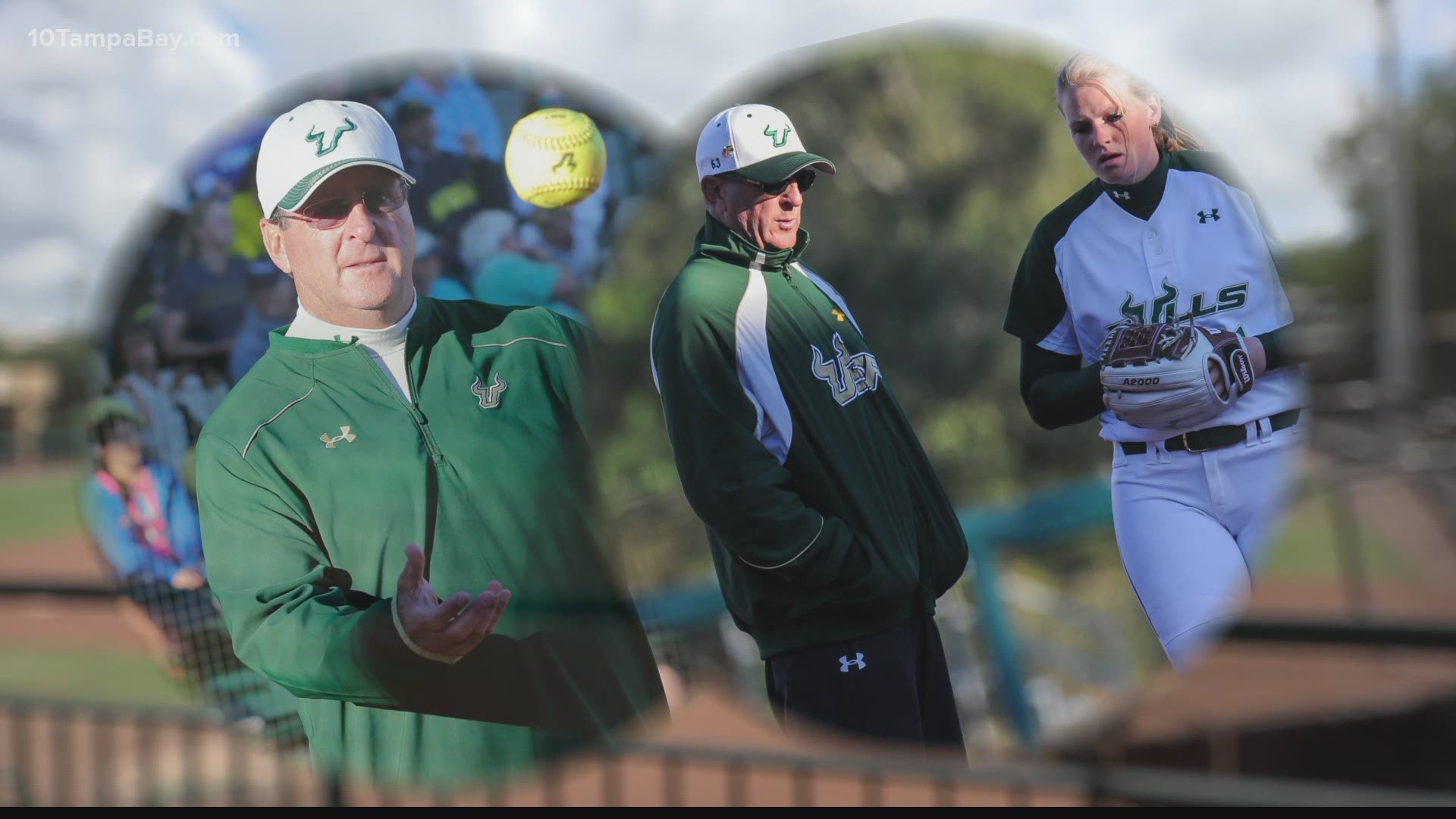 TAMPA, Fla. — Attention was split in the top of the seventh inning at the USF softball complex on April 30. Many eyes were on the dugout, eager for the final out – the out which would give head coach Ken Eriksen his 1000th-career victory as the team’s head coach. History hung on every pitch.

Yet, in the build-up to the long-awaited moment, Eriksen himself couldn’t take his eyes off junior pitcher Georgina Corrick.

“I was like, ‘Yes! George got the no-hitter!’,” said Eriksen, the longtime leader of the Bulls’ softball program. “It was George’s weekend.”

Corrick was brilliant against ECU. She needed just 71 pitches to throw her no-hitter. The Bulls rushed the field to celebrate after the final out. The 1000-club finally had a new member.

“I was a part of a special moment for Coach,” said outgoing senior, Ana Bruni.

After five years in the USF uniform, Bruni is still learning new lessons from her coach.

“He really is a father figure to every girl on the team,” said the outfielder from Schwenksville, Pa. “He definitely teaches us some outside lessons that I definitely will take with me from here.”

The same goes for Brooke Leistl, a fellow outfielder from nearby Newsome High School.

“On the field and off the field he’s taught us so many life lessons,” she said. “His knowledge is what is crazy to me. He knows the game before it happens. He’s 12 steps ahead of everyone.”

Eriksen has done something few others have been able to do. He’s just the 28th NCAA Division-I coach to reach 1,000 wins, according to USF Athletics.

He became the head coach of the Bulls in 1997 after playing baseball for the Bulls in the mid-1980s. That first year as coach, Eriksen guided the team to its best-ever national ranking at No. 14. The team finished with 50 wins.

“We are trying to have success and success is get the barrel to the ball. Success is getting an ‘A’ in your class. Success is showing up every single day. Be consistent,” he said. “Let’s not get to tomorrow, you know? That’s not a given.”

The wins have piled up, but the approach has never changed for Ericksen, who is much more concerned with the process than the results. On the team’s final practice before a season-ending four-game series with rival UCF, he sat in the dugout and cracked “dad jokes” with his players, all of whom were born well after his first year of coaching at his alma mater.

The lighthearted nature of his program and fun-filled atmosphere has produced a 100 percent graduation rate and quality people, not just players.

“Legacy? Teacher. That’s it, man. It’s pretty simple,” said Eriksen, who also helped the Bulls win over 400 games as an assistant before taking over as head coach.

Both Leistl and Bruni were freshmen on the team when Ericksen eclipsed the 900-win mark. They recalled it being another ho-hum occasion for the team leader. He evaded the congratulatory post-win water bottle shower then.

The Bulls enter their final series of the year against UCF, with a 27-13 record. The hope is they’ll keep the winning going in the postseason and match the program’s lone Women’s College World Series appearance in 2012.

Along the way, they’ll appreciate the moments.

“You don’t get time back. Father time is undefeated,” said Eriksen.