7-year-old wins money, plans to save the ocean with T-shirts 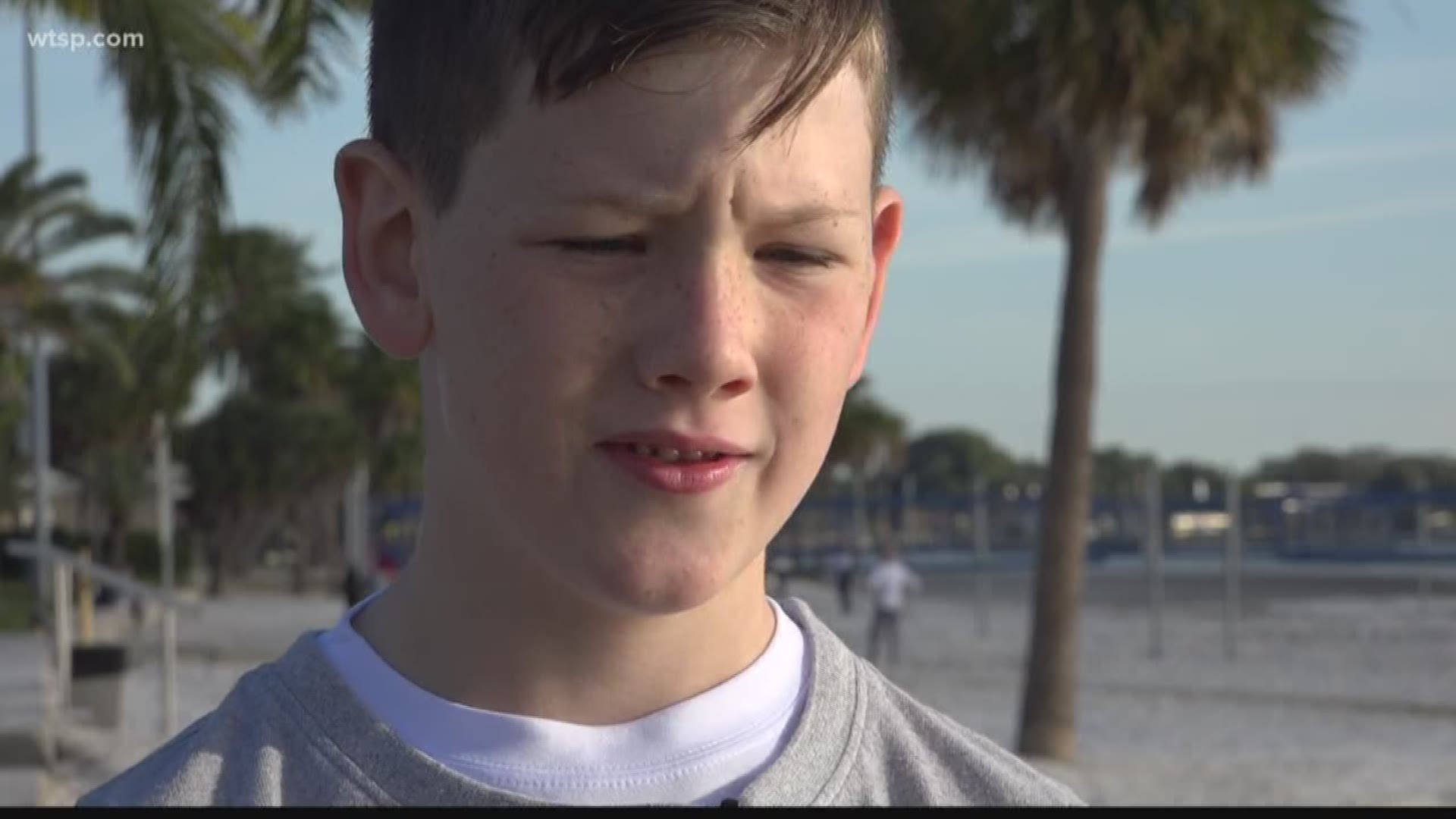 ST. PETERSBURG, Fla. — Libby Fetherston-Resch sat quietly on the park bench watching her son’s head peeking over the seawall. The sunrise back lit Miles, who was so focused on his task that even with her sunglasses on Libby could only catch a glimpse of him for a moment at a time.

Miles is a first-grader who likes to tell shark jokes and has a heart for the sea. If it wasn’t obvious from his actions, it was quite apparent from his apparel. The brightly-colored logo which he and his family designed formed a heart-shape utilizing a boy’s outstretched arms and various smiling sea creatures.

“The little things you find, that’s how you know we’re doing better,” he said as he scooped up a plastic orange bead from a clump of seagrass.

Miles started Kids Saving the Oceans about a year ago to raise awareness, especially with peers, about the perils of sea pollution. He sells shirts, hats, and stickers on his website. The shirts are all made from recycled materials.

“I was watching Shark Week last year and I didn’t like how we treat our sharks and our oceans, and I wanted to donate my piggy bank to help,” he said. “It turns out, $13 doesn’t do a whole lot so I decided I needed to do more, and I started Kids Saving Oceans.”

The mission for Miles is twofold: Teach people about how harmful humans can be to the planet and remind them that they are the ones responsible for keeping it clean.

It’s heavy stuff for a seven-year-old.

“Goodbye trash,” he said with a smile as he dropped a bag of trash into a beachside garbage can.”

Last month, Miles attended St. Pete Pitch Night, an inaugural pitch competition organized by St. Pete Green house. Companies pitch why they should be given a $5,000 prize to put towards their cause.

In a room full of accomplished adults, the boy who loves the ocean won.

Instead of writing a one-time check, Miles plans to use the money to create more items to sell on his website. The money can go much further that way thus enabling larger donations to more groups. Donations will be made to local ocean-related conservation groups like Keep Pinellas Beautiful, Surfrider Foundation, Shark Allies, and Mission Blue.

Miles was inspired to help the planet while watching Shark Week on the Discovery Channel in the summer of 2018. He saw video of polluted waters around the world. His eyes and heart took notice.

“Since the ocean have lots of plastics in it, why not take the plastics out and turn it into something somebody can use?” he said.

Miles met with St. Pete City Councilwoman Gina Driscoll in November to discuss plastic bans. He has also met with Charlie Crist and Governor Ron DeSantis has also expressed interest in meeting Miles. He meets with local groups for beach clean-ups. His next is Saturday, Dec. 7 in Madeira Beach.

“This is 100 percent his business,” said Libby. “He’s really, I think, grown into feeling confident talking about it and articulating what he hopes to do.

“He’s a compelling kid,” said Libby. “Every person can make a difference.”

RELATED: Florida boy on a mission to raise $1 million to keep oceans clean