Jon Dengler hopes to upgrade his food donation opportunities. He's currently working out of a tiny trailer. A community partnership is opening the door to much more. 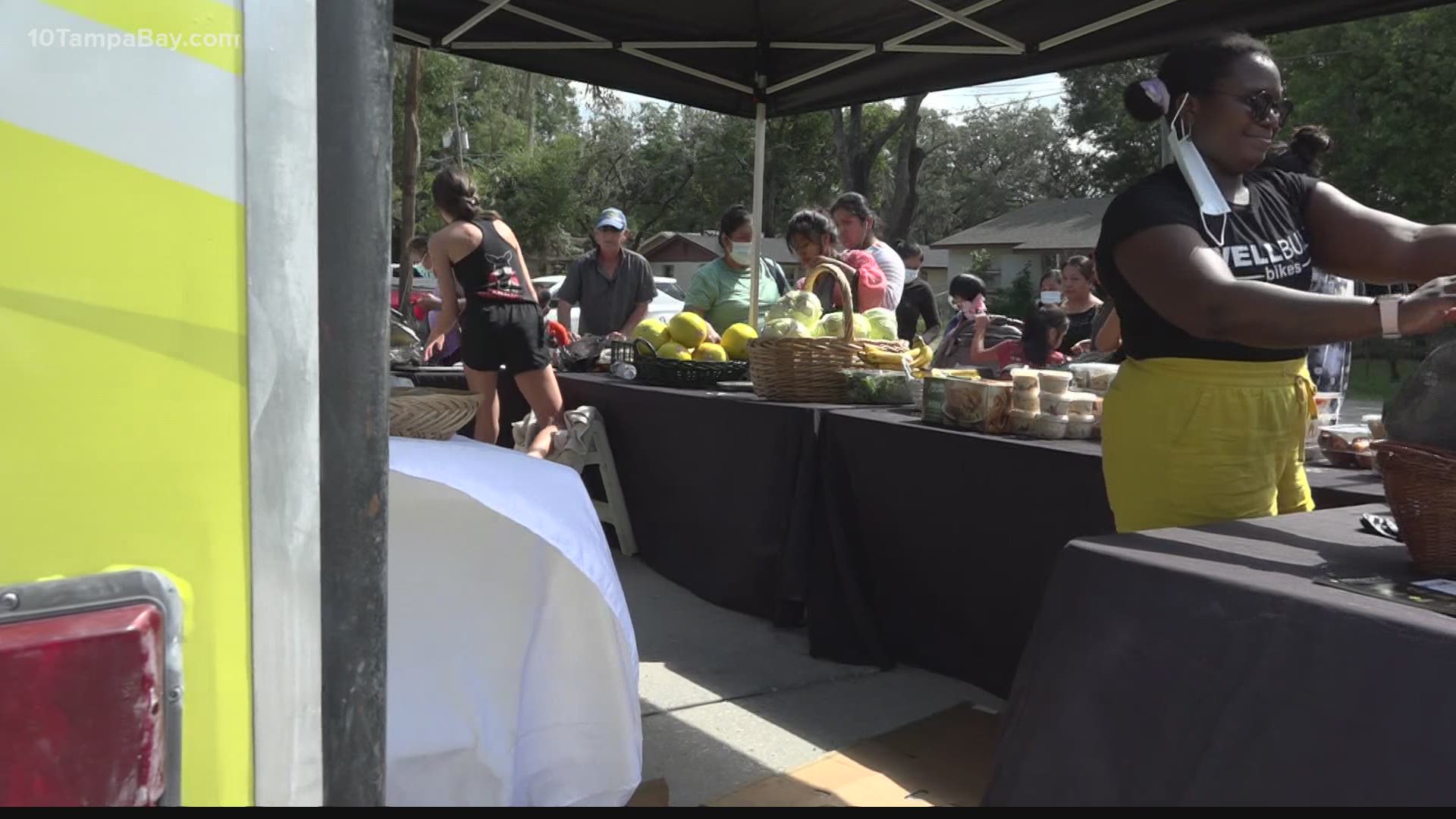 TAMPA, Fla. — Jon Dengler loved Tampa so much he tattooed the iconic Tampa Theatre sign on his left leg himself.

“As far as I’m concerned, this is all there is,” he said proudly. “I love my city. I love that sign.”

Dengler moved to town at the age of nine and has been putting his blood, sweat, and tears into improving it. The latest chance to do so includes rebuilding a bus into a rolling grocery store.

To do that, he has to do away with his tiny trailer.

“I love the utility of it. It’s not good enough but nothing is good enough. I’m always like we can always do better,” said Dengler, who also operates a bike shop out of the University Mall.

Dengler’s dream is to provide quality food for people in need on a much bigger scale than he’s currently able to do. Right now, he’s been serving Tampa residents with stops multiple times per month at areas spread out across town. Most of the donated food is perishable.

The fix will be a bus he finagled from the University Area CDC.

“They had this bus sitting on their property that I was like, ‘I don’t see that being used.' So, I went in to the director and I was like, ‘Give it to me.' She was like, ‘I can’t just give you this expensive vehicle,'” he said.

Eventually, they worked out a deal. Dengler got the bus but had to continue to serve the needs of the community on UACDC grounds.

It was a no-brainer. The bus just needed some upkeep and modifications to carry fresh foods. He’s already outfitted the windows with hydraulics so shoppers can reach into climate-controlled bins for the food, which should stay fresher longer than had it just been sitting out on tables in the Florida heat.

“Literally it won’t leave the fridge until it’s in someone’s shopping bag that they chose,” said Dengler. “We just keep raising the bar because really what I want to offer more than food is a dignified experience of shopping and freedom.”

I joked with Dengler, saying once his bus was operational that he’d be rolling up to his many weekly food drop locations looking a lot like FEMA, with all the bells and whistles necessary to supply hundreds of people.

“Hopefully sexier,” he said with a chuckle.

That was part of the idea. He never wanted to just provide goods to sustain bellies. He wanted to provide goods in a dignified way. The bus, which will serve as a rolling grocery store in a sense, will accomplish just that. Food will remain chilled up until the moment a shopper grabs it from the bus window and places it in a plastic to-go bag. That in itself will help food last longer. One of the big hurdles with Dengler’s current setup is making sure all the perishable items are still consumable upon arrival at the market locations.

“It will pull up like a mobile grocery store,” he said Friday, just as he was set to wrap up the morning stop and make plans for the evening rush across town.

Dengler got his current trailer eight years ago and used it to haul things from food to bicycles. He added a refrigeration unit around last Christmas in order to haul fresher food items. It is good, but not good enough for Dengler, who always looks at life through that same lens.

The bus will do that. Dengler has been spending Mondays and Wednesdays trying to make all the necessary modifications to the bus. It’s housed at the Waters Avenue Church currently where a pastor on staff there lends a helping hand with repairs and upgrades. Dengler hopes to have it up and running in the next few months. True to his nature, he says that day can’t come soon enough.

“Three or four months, I think we’ll be pulling up in it,” he said.

If you are in need and want to receive food from the Kinship Free Market, visit one of these pick-up locations: