Man no longer homeless after choosing his dog over housing

James Kelly could have found a place to live but it meant he'd have to give up his dog. He opted to live on the streets for seven months instead. 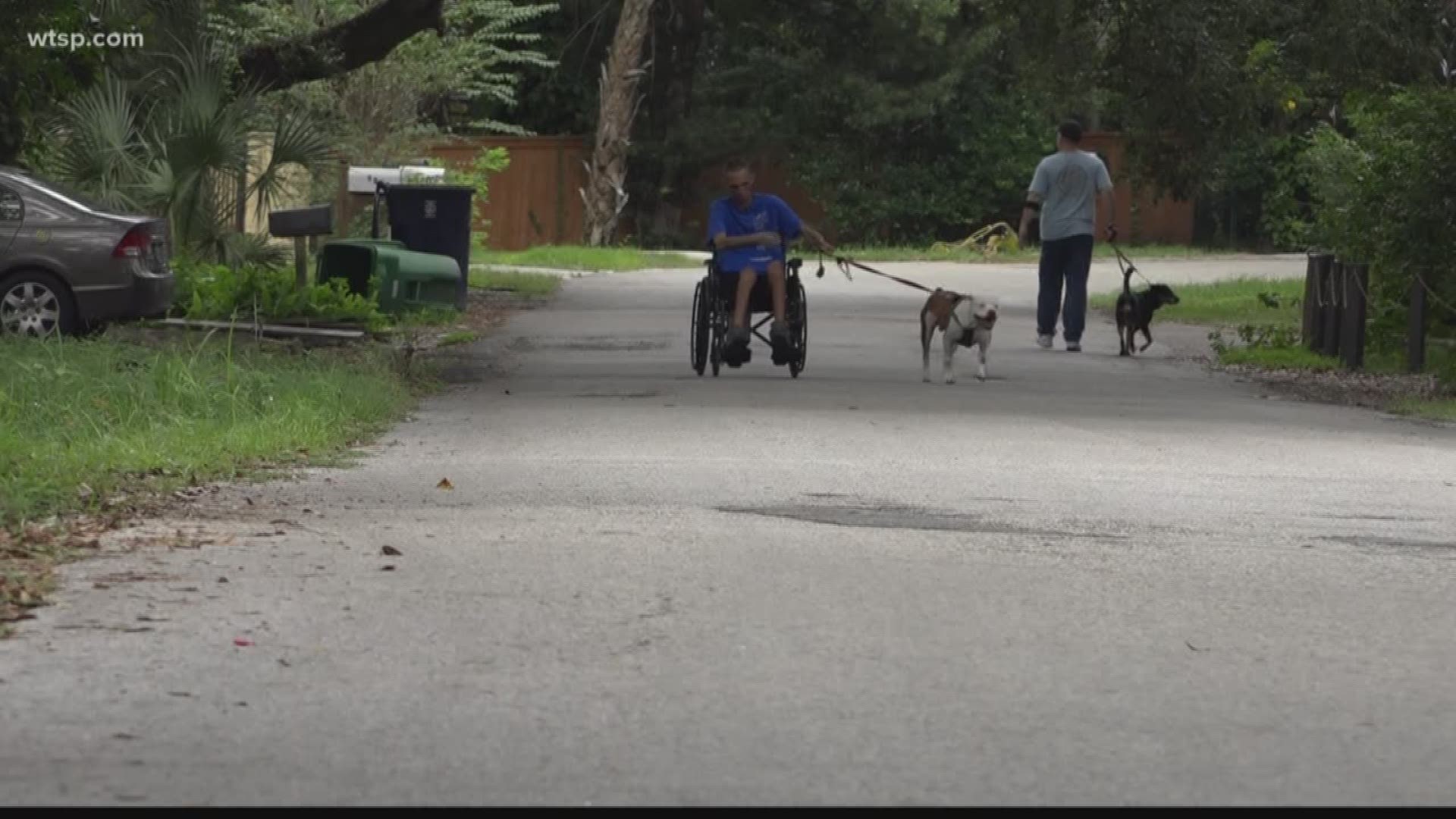 TAMPA, Fla. — James Kelly watched from the sliding glass door of his new apartment as his dog, Diezel, pranced around the backyard. It’s only been two days since they moved it but it already feels like home.

“I love this place,” Kelly said.

For the last seven months, Kelly, 39, and Diezel have been sleeping on concrete. The duo was homeless after, as Kelly says, his roommate failed to pay rent. It was a swift eviction. Kelly and his dog ended up sleeping near the Pet Supermarket on Fowler Avenue near the University of South Florida.

“I just love him. He’s my main man,” Kelly said of his 75-pound pit bull. “I could have been off the street the first month I was out there but it was a dog situation.”

Nowhere Kelly could find for housing would accept Diezel, whose name is tattooed on Kelly’s right forearm. So, Kelly opted to remain homeless instead of giving up his dog.

“There’s a lot of homeless that have an animal that they rely on for emotional support,” Hillsborough County deputy Chris DePolis said. “Trying to convince a person to give up that one thing that they care about and are impassioned about and are out here dealing with the elements with every day to say, ‘hey, give up your buddy and I can help you’, they’d rather stay on the street."

DePolis found Kelly and Diezel and got the wheels turning towards housing. He got them connected with Rhonda Eldridge, president of the Community Pet Project. She connected Diezel with Harmony Vet Care to treat the dog’s stomach issues. Kelly got a mental evaluation in order to have Diezel named an official emotional support animal. That label opened the doors for housing, which DePolis coordinated with the Tampa Housing Authority.

“Thank God for all the people who had my back,” Kelly said.

It all started because a man wouldn’t exchange a dog for housing.

“These are housewarming gifts. Diezel just moved in two days ago,” Eldridge said with a bag full of goodies. “For us to be able to see them in an environment where he’s happy and healthy, it means everything to us.”

The fight isn’t over. Health issues have plagued Kelly. He’s crunched his 6-foot-4 frame into a wheelchair for over a year. A staph infection in his leg required the removal of part of his hip. Crohn’s Disease is a major factor in him only weighing 135 pounds. He needs another surgery but couldn’t recover while sleeping on the pavement.

This new home means so much more than just a roof and four walls.

The next hurdle for Kelly is to get a wheelchair ramp built for his apartment. For information on how to help, contact the Hillsborough County Sheriff’s Office at 813-247-8060 or Deputy DePolis at cdepolis@hcso.tampa.fl.us

Community Pet Project website says it “was organized in 2017 as an all-volunteer 501c3 charitable organization serving Hillsborough County, Florida. Many area rescue volunteers often encounter homeless and at-risk people who are desperately trying to care for their pets. For some, their pets are the only reason they are able to survive a life of hopelessness and despair and many end up surrendering their pets to local shelters because they are unable to provide for their pets. The need is great and through the Community Pet Project volunteers work to help these people keep and care for their pets.”

RELATED: Wounded Warrior’s love for tennis remains even from wheelchair