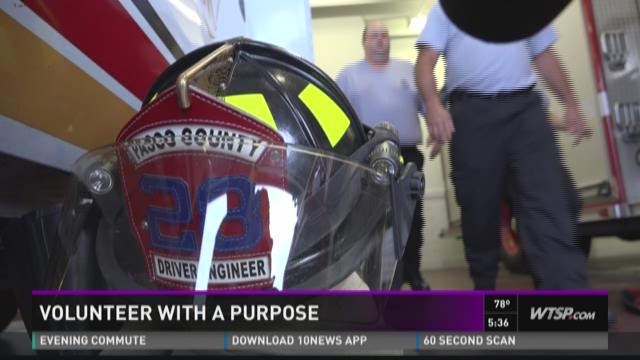 “Purple is my favorite color,” she said with a smile, referring to the purple S-O-R-E-N-S-E-N letters scrawled across the back. “I got to make it girly. Too many guys.”

As one of the only female firefighters in Land O’Lakes’ Station 28, she can get away with purple on her helmet.

It’s a shocker she’s even wearing one at all.

Sorensen is a volunteer. In fact, everyone at Station 28 is putting their life on the line without pay. About 87 percent of America's 30,000 fire departments are either fully or partially staffed by volunteers.

“Your adrenaline is kicking in because that’s what we’re here to do,” said volunteer Craig Hare. “We’re here to fight fires and save property and save lives.”

Sorensen’s path to Station 28 was unexpected. She decided to join for the chance to fight fire with fire.

“Within a month of living here we experienced a major house fire and we lost all of our belongings,” she said. “You smell that smoke smell and you’re reminded constantly of that tragedy.”

Later in life, firefighters saved her stepfather’s life on her prom night. He was in a horrible car accident and she witnessed him being pulled from the wreckage while driving to the school dance.

“You never think it’s going to happen to you,” she said.

&ldquo;Within a month of living here we experienced a major house fire and we lost all of our belongings,&rdquo; said Stephanie Sorensen, of her&nbsp;motivation&nbsp;to be a volunteer firefighter. WTSP photo

Those “traumas” are the reason she decided to face her fears. She wanted to become a volunteer and help others who are facing difficulties like she faced as a child.

“Instead of harboring that fear she decided to conquer that fear,” said Pasco County Volunteer Services Chief Walter Lewellen.

This month, volunteers all over the country are being honored for their service through the Step Up and Stand Out program, which asks for nominations to honor volunteer firefighters for recognition.

Nominations for the program can be made through May 21.

"As a former first responder, I want to continue to do what I can to help keep families safe," country music star Chris Morgan told Step Up and Stand Out. "That means making sure our volunteer fire departments have the support they need. This program is a great way to show volunteer firefighters how important they are to us and their communities."

According to the program, “Firefighters respond to more than 31 million emergency calls each year – three times the number of emergency responses in 1980."