Three veterans got to experience open cockpit flights thanks to Dream Flights out of Punta Gorda. 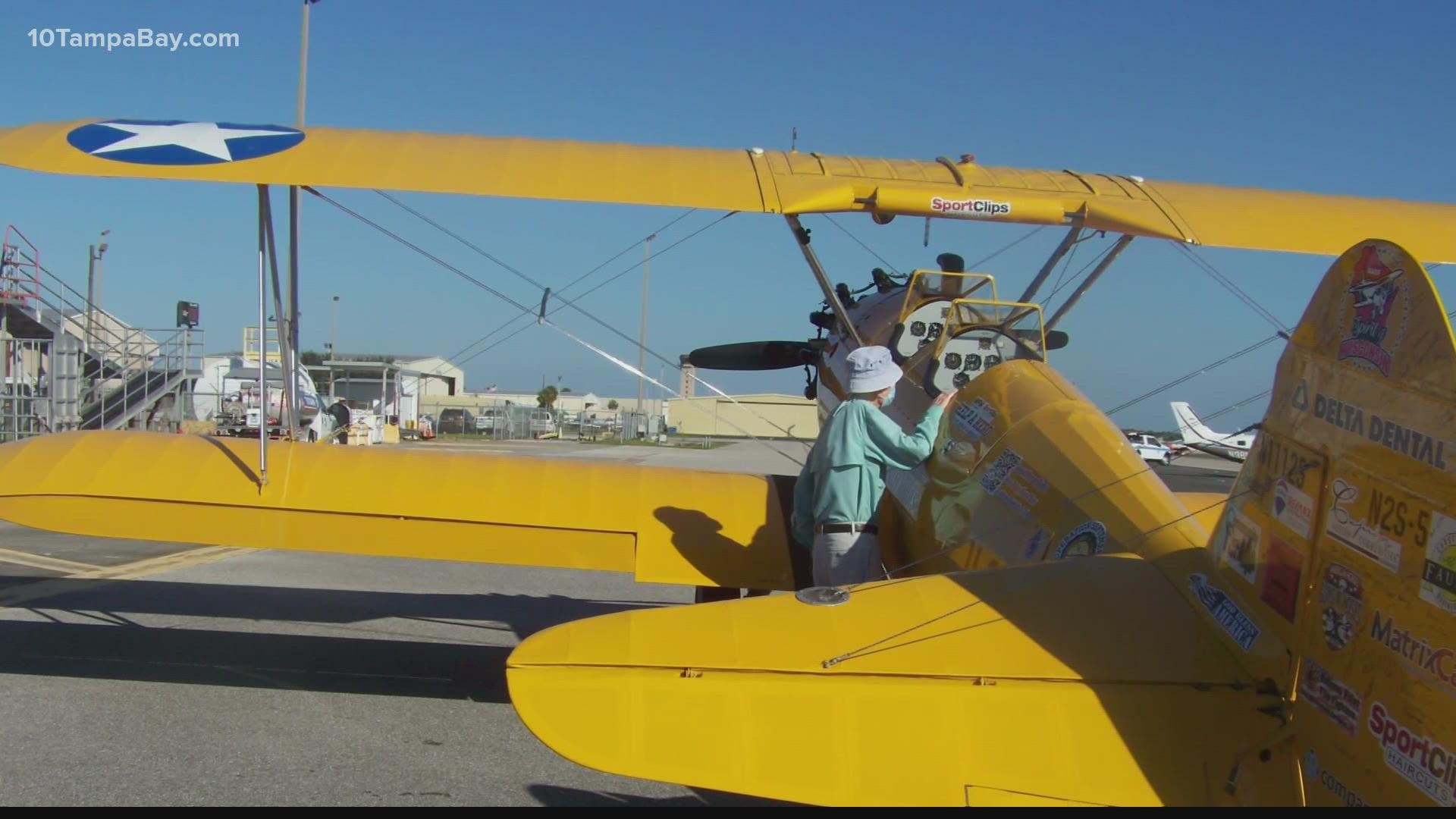 PUNTA GORDA, Fla. — Dr. Joseph Bonta has spent a lot of time in the sky during his lifetime. The 97-year-old resident at The Fountains at Lake Pointe Woods in Sarasota flew private flights for decades. His favorite plane? The Beechcraft Bonanza.

But very few aviation experiences could compare to the one he received on Sept. 26.

“This was a special event for me. I’ve flown a lot personally but never anything like the great flight here,” he said, poolside at his retirement home on Tuesday morning. “I’ve never flown in an open cockpit.”

Bonta, along with Clyde Foster and Patrick Kelly, fellow neighbors at Lake Pointe Woods, took off one at a time from Punta Gorda Airport two weeks ago in a WWII-era open cockpit biplane. The three World War II veterans got to take to the skies because of the WWII Dream Flight program.

“Oh yeah. I thoroughly enjoyed it,” said Foster, who will turn 97 on Tuesday. “WWII biplane, open cockpit. That was really fun.”

The short flights took the veterans over the Florida coastline. The biplane’s open-air cockpit meant the ride as a bit windy and noisy, but the men enjoyed it tremendously. Friends and family waited on the ground, and the veterans even signed the plane’s tail.

It was a day to remember.

“Where else are you going to get that experience?” said Kelly. “We don’t have that many planes like that available anymore.”

Bonta joined the Navy when WWII broke out and was sent to Colgate University to become a doctor. When the war ended, he attended Cornell University to finish his medical degree and then completed his residency at Sloan Kettering in New York.

During the Korean War, Bonta joined the Air Force to serve his country and was stationed at Clark Air Force Base in the Philippines as the chief surgeon. After the Korean War, Bonta returned home to Ohio and opened his own practice as a surgical oncologist. During that time, he invented a mastectomy knife that may still be used today, the Bonta Mastectomy Knife.

Foster joined the U.S. Navy in 1943. He trained in electronics and was initially assigned to the submarine base at Pearl Harbor. His main duties involved maintaining electronics on all of the submarines before departing to sear. Clyde served in this role until 1945.

Kelly, 97, was drafted in August of 1943 when he was 18 years old. He served as Private-Private First Class in the Machine Gun section of the 133rd Anti-Aircraft Gun Battalion. His battalion was awarded three battle stars for the battles of Northern France, Central Europe and the Rhineland. He was discharged in January of 1946.

Dream Flights is “dedicated to honoring military veterans and seniors with the adventure of a lifetime: a flight in a Boeing Stearman biplane." The outreach hopes to make military servicemember’s wishes come true.

Foster, Kelly, and Bonta took part Dream Flight’s newest avenue of service called Operation September Freedom, which its website calls “the largest barnstorming event in U.S. history, and the first and only Dream Flight Tour dedicated to honoring the men and women who fought in the war that changed the world.” To date, 891 veterans have taken flights of the 1,000 scheduled.