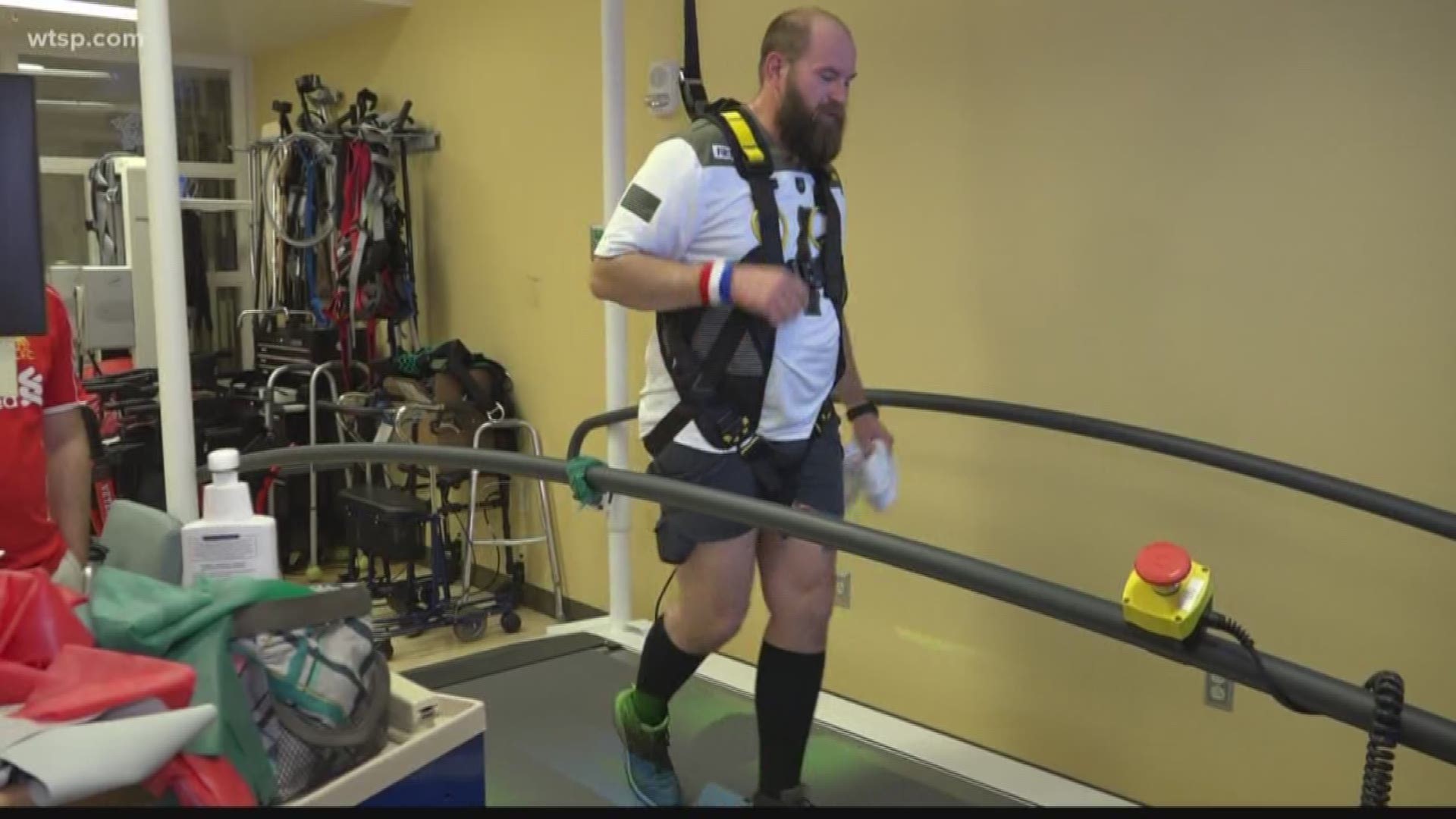 TAMPA, Fla. — Sweat poured from Jeff Dawson’s face as he trudged forward. The treadmill moved steadily underfoot. His grunts and laboring could be heard down the hallway at James A. Haley VA hospital.

After just a few minutes of straining, he looked over at his therapist Chris Kroger.

“It’s amazing what the human body is capable of,” the soldier said.

Speed is the perfect way to summarize what Dawson has accomplished since being shot during deployment on July 20, 2019. A round pierced his right shoulder from 60 yards away in a tiny Afghanistan town, and it did major damage.

“Through my chest, I fractured my clavicle, my second and third rib,” began Dawson with a furrowed brow. “I had spinal shock.”

The shot brought the strong, 6-foot-2, 240-pound man to the ground in a hurry and embedded in his left shoulder blade. Dawson was flown to Germany for surgery and was transported back to the United States to recover. He spent three and a half weeks in Bethesda, Maryland, at Walter Reed National Military Medical Center before coming to Tampa in September.

“When we were dating, he used to make a joke that he had the safest job in the military,” said his wife, Trish. “I didn’t realize what the meant until later on. He lied.”

The couple met in March 2010 and married in June 2012. He’s been active duty military for their entire relationship.

The Army soldier experienced battle trauma in 2013 as well when an IED exploded in Afghanistan and sent shrapnel into his left leg. He was awarded the first of his two Purple Hearts that year.

“He’s been gone a lot,” said Trish, who spends most of her time caring for Jeff. “This is the most we’ve spent together consecutively our entire marriage.”

Jeff’s days consist of multiple therapy sessions at James A. Haley Veterans Hospital across from the University of South Florida campus.

There he works on muscle strength and endurance with Kroger and others.

He’s set a goal to walk across the Sunshine Skyway Bridge on March 1, in the third-annual Skyway 10K.

“I might not finish it with the allotted time but I’m walking that bridge,” he said with determination. “I think that if I get to the top of it I won’t have any issues getting to the bottom of it. It’s probably going to take me a little bit longer to get down.”

“It’s definitely a big goal,” said the therapist. “It’s not a common goal that patients set for themselves but he’s going to do it.”

Most everyone is impressed with Dawson's progress to this point. After being shot eight months ago, he’s gone from partially paralyzed to walking unassisted.

Every step is a new milestone.

“Those trials that you go through end up making you the person you are and you grow. You grow a substantial amount from it,” said Dawson. “Sometimes you’re going to fail. You know. You’re not going to reach the goals you set for yourself but that’s not a reason to give up or keep trying.”

The Skyway 10K represents a major hurdle in his recovery.

“He’s done well setting his goals through everything and then meeting those goals and exceeding them,” said his wife. “I mean, I think he’s kind of blown everybody out of the water by his progression and how fast it’s been.”

Dawson will attempt to finish The Super Run 5K at Gadsden Park on Saturday, February 15. He hopes that helps train his body for the 6.2 miles required on March 1 across Tampa Bay’s most iconic bridge.

RELATED: Submit your photos for the Skyway 10K Wall of Heroes

RELATED: 'I'm not going to throw away my shot' | 2019 Skyway 10K fastest woman helps you get ready for this year's race