Zach Gallagher has been swimming since he was six. He's ready for the biggest swim of his life on May 8. 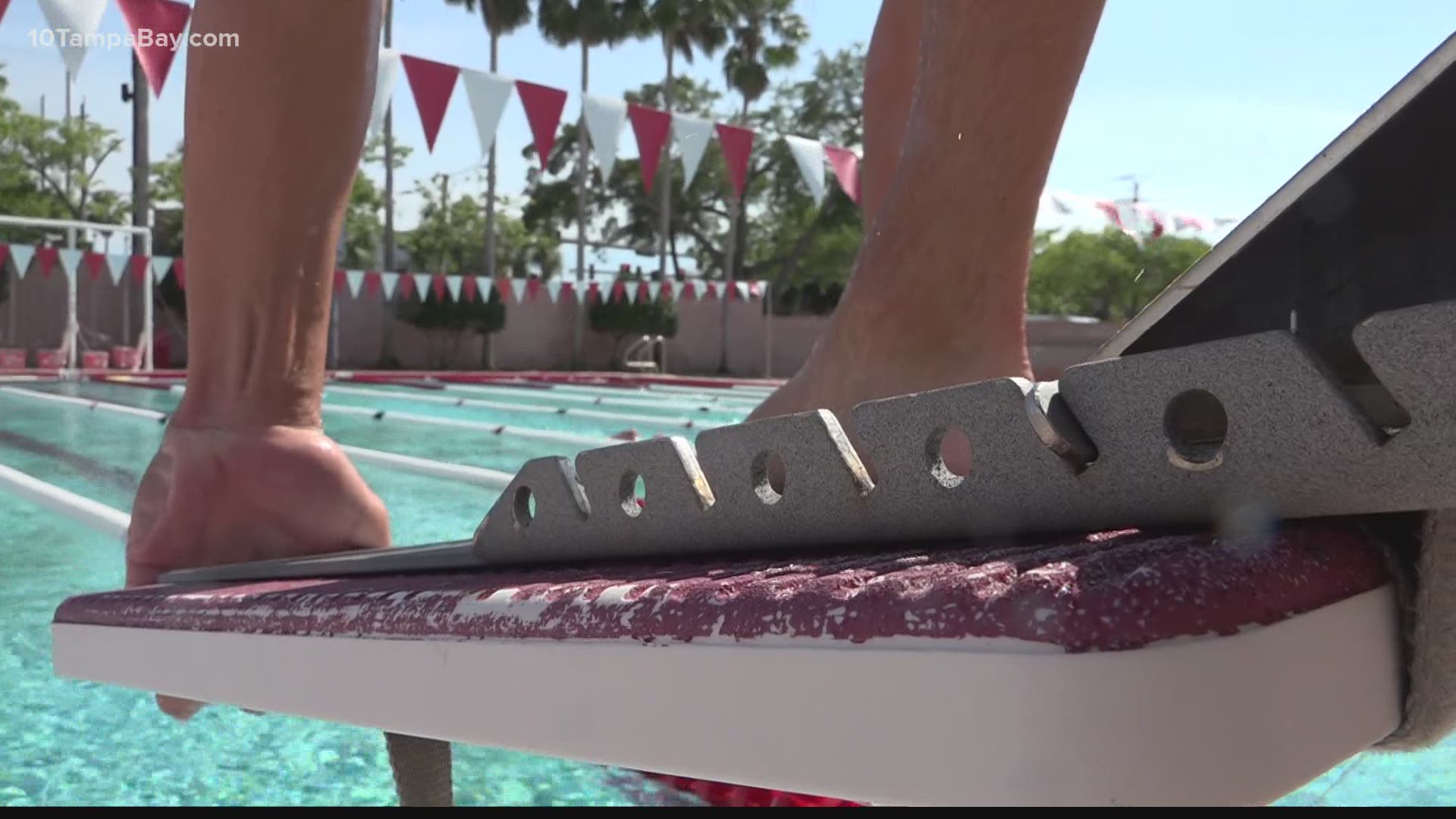 TAMPA, Fla. — Zach Gallagher has been swimming since he was a little kid but has never been more eager to enter the water as he is for this weekend.

"I can’t wait for the experience but I’m a little nervous. It’s going to be far," he said.

The Tampa Prep junior swims the 50 and 100-yard freestyle, and the 100-yard butterfly races for his high school and club teams. Saturday, May 8, he’ll join dozens of other swimmers in the tenth-annual Swim Across America event in Tampa Bay, which benefits Moffitt Cancer Center and Johns Hopkins All Children’s Hospital.

It’s Gallagher’s first time swimming in the event and he’s doing it to support his mother.

"When we found out Swim Across America was benefitting where she had done her chemo and all her radiology, she was instantly on it and when I made the decision to do the longer swim she was pretty happy for me," he said.

Gallagher’s mother was diagnosed with cancer in August 2020. She began getting treatment and fighting through chemo with a positive outlook.

“Every day she’s getting better. Every day she keeps a smile on her face,” the son said. “If you never met her, you’d never even know she had cancer.”

It’s a story that is very familiar to Gallagher’s coach, Jason Bowes. He ran an Ironman competition in honor of his mother, Anne, in 2019 after she passed away from pancreatic cancer the year before.

"I did it in Chattanooga. It’s overwhelming," said Bowes.

Gallagher has been swimming under Jason since eight-grade. They have grown even closer since Gallagher’s mother’s diagnosis, engaging in many meaningful talks on the pool deck.

"Through my entire training, my main motivation was my mother. So, it made it completely doable to know I was going to be able to accomplish my goal. Knowing that he’s doing it for the same reason I know he’s going to be pretty motivated."

Gallagher took to Instagram on April 11 to share his mission. Very few of his peers even know his mother was dealing with cancer. His post asked followers to consider donating to his Swim Across America fundraising page.

That encourages the young swimmer. Bowes says a few other of his TBay club swimmers will participate in the May 8 event, which leaves from North Shore Park in St. Petersburg and covers two miles of open water in Tampa Bay.

RELATED: A Pediatric cancer survivor started baking during treatments in hopes of opening her own baker

That is part of the reason the donations keep rolling in.

"I thought I was just going to get a few people to donate. When it boosted off, it was just amazing," said Gallagher, who is currently the highest-ranking donation seeker in the Swim Across America event with over $9,400 received. "I wake up with a smile on my face because I check it every morning."

You can donate to Gallagher’s cancer swim online. Proceeds from the swim will support the Swim Across America Lab, focusing on immunotherapy clinical trials and cancer research, as well as the Adolescent & Young Adult Program, addressing the unique concerns of young adults with cancer at Moffitt Cancer Center and pediatric cancer research at Johns Hopkins All Children's Hospital.
What other people are reading right now: