Charles Hessemer is 92 and has been perfecting his craft for decades. 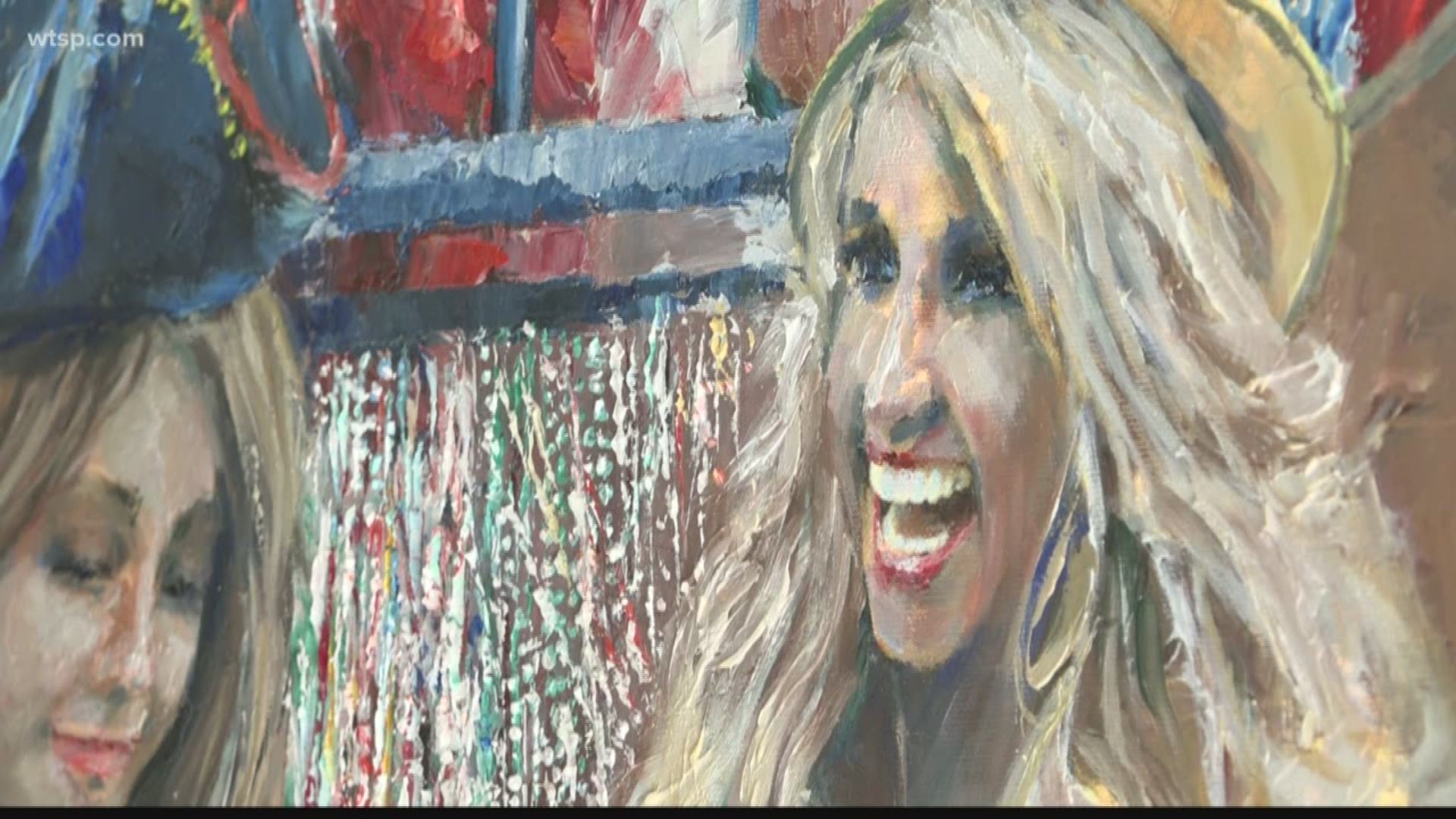 TAMPA, Fla. — Dozens of textured paintings hang on the walls of Charles Hessemer’s south Tampa home. Landscapes cozy up to framed figures of women. The artist’s favorite pieces are of the same woman

Hessemer and Noreen danced all evening and she called him the next day. They were married 19 years before she passed away.

“I painted her over 50 times,” Hessemer said. “She was very beautiful.”

The paintings, be them Noreen, a forest scene, a dog, or an engaged couple, all grab your eye for their three-dimensional feel. The paintings come to life off the campus because of Hessemer’s world-renown technique.

“The life of an artist is a climb up an empty stairway, but you can never stop climbing,” said the 92-year-old in front of his upstairs painting easel. A large coarse canvas was prepped with green paint and a charcoal outline of two ballet dancers gliding in front of an oak tree. Hessemer has transferred the image from a painting to his workspace that morning.

Oil paints sat in front of his knees between him and the canvas. He dabbed and scraped his palette knife along the red paint and scraped it down the edge of the female dancer’s skirt.

“I am going to be turning that dress into a dark red dress,” he said as he worked quietly. The scraping of the knife against the canvas made a tiny sound as he flecked away with different shades of red mixed with oranges and black.

The symphony was underway.

“Paint forever until you die,” he said.

For decades, Hessemer has painted almost exclusively with a pallet knife. His skills have grown over the years. He always knew he’d become a fine artist. He picked up the craft as a teenager enlisted in the Navy. He found a book in a desk explaining the nuances of painting the human figure.

He spent years perfecting it.

A simple online search will turn up thousands of examples of palette knife art. Nearly all of them are plants. Very few people form humans with a knife like Hessemer. He’s proud of his ability to do what others can’t.

“I’m going to do something nobody else can do,” he said.

Three years ago, Hessemer, who is hard of hearing, heard the booming noises of Gasparilla canons just four blocks from his home. The sound triggered his imagination. He grabbed his camera, hopped on his bike, and rode to the nearby parade route. He snapped a few photos and returned how to study them. He noticed the smiles and the excitement over Tampa’s enormous regional pirate spectacle.

It gave him an idea.

He took on a new task of creating Gasparilla-themed art with his palette knife. He’s done nine in three years.

His works sell around the country. Most hang in the homes of various collectors. One painting of a woman bent over in the waves of a shoreline sold for $24,000 – his most expensive piece. The rarity of a pallet figure-painter combined with Hessemer’s great talent with that palette means his pieces are highly valued and sought after.

Lately, the Gasparilla pieces tend to be catching a lot of attention.

“Without question, they say, ‘Look at the color,’” Hessemer said.

He says he’s never copied anyone. He’s self-taught, although he’ll admit Vincent Van Gogh is a favorite artist of his. The outlines of women beneath shaded trees or lying still on the sandy beach are some of Hessemer’s beloved pieces.

It can take weeks to finish one painting. He studies at the American Academy of Art in Chicago and had a successful life in advertising. Now, he paints seven days per week.

To see more of his work, visit Charles’ website.