The woodworking group makes 20,000 toys in a typical year. Even given all the COVID-19 pandemic challenges, it still expects to make 15,000 toys for kids in need. 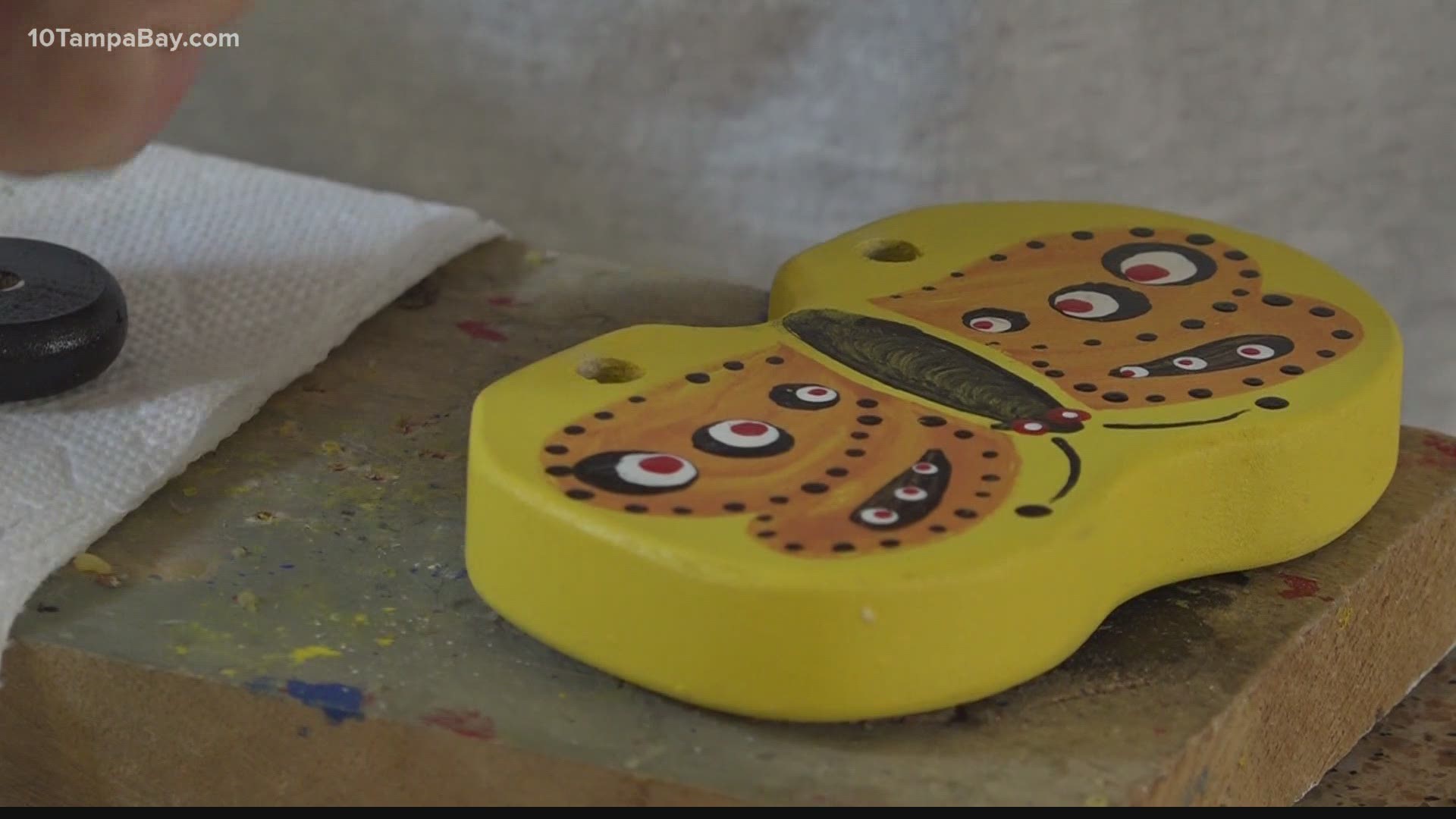 OLDSMAR, Fla. — As the sun came up, George Chapman grabbed his keys. It was time to once again clear the garage.

“The cars get it at night. I get it during the day,” he said with a smile.

The Safety Harbor man has been woodworking for 50 years. These days, surrounded by tables he’s created, he spends his days punching holes in tiny cars.

“I was drilling holes in my sleep for months,” he said.

Chapman is one of 70 or so volunteers who work tirelessly to create toys from wood for kids in Tampa Bay. Typically, the ToyMakers of East Lake group would gather for weekly work sessions at a giant facility in Palm Harbor. Due to COVID-19 restrictions, those days of mass-gatherings are over.

That doesn’t mean the work is halted.

“I draw the toy on the wood, cut it out, do what we call edge sanding,” said Jeff Hilke, who has been volunteering with the ToyMakers for a few years after hearing about it the local news. “It’s as busy as you want to be. If it comes down to cutting the grass of working in the shop, I tend to gravitate toward the shop.”

Hilke and Chapman are part of a group of divided workers connected by a common mission. It’s a relay race of sorts, where one person works on one phase of wooden toy development, passes it off to the next, and so on until the final pieces are bagged for delivery to area hospitals, Ronald McDonald houses and local public safety entities like police and fire departments.

Due to the pandemic, ToyMakers closed its doors March 16. It didn’t take long for members to show up looking for work.

“On the day that we closed, people lined up and said, give us toys to work on at home,” said Bob Helms, the president of the organization. His wife, Janet, serves as vice president. “We shut down hard when everything was shut down.”

“We probably have about 70 adults and 65 students working from home,” said Theresa Burke, who spent Friday morning working alongside her granddaughter. “It’s been interesting.”

Down the road from Burke, Bill and Lynne Firth work in tandem in their Palm Harbor home. He glues and assembles wooden wheels on toy cars. She adds colorful paint and decorative eyebrows to ladybugs on wheels.

“These are going to be ladybugs,” said Lynne, who manages to craft perfect paint jobs despite battling shaky hands as a result of Parkinson’s disease. “Since you know you’re doing good for the kids, you don’t consider it a chore.”

She and her husband are New York natives. Bill has been volunteering for over a decade with the ToyMakers.

Not even COVID concerns were going to slow down an operation used to pumping out more than 20,000 toys for kids each year.

“If you went seven months without making toys there’d be an awful lot of kids without toys,” he said. “I go through probably a couple hours (of work) per day.”

Hilke recalls a time when his grandson wound up in the hospital and was given a wooden toy from a different branch of ToyMakers. The gesture brightened his day. That memory sticks with his grandfather.

“He and I played on his hospital bed with that simple wooden toy for hours,” Hilke said. “When I work on the toys, I think about the kids who will eventually get it.”

Burke estimates that the ToyMakers will create close to 15,000 toys in 2020. That figure is remarkable to those tasked with assembly and delivery. They will fall short, most likely, of their typical output but everyone involved in the process is proud of the gains they’ve made due to the teamwork of all involved.

“When this all started I could just only imagine that we wouldn’t have any deliveries for many quarters but we pulled it off,” Burke said with a smile.

The ToyMakers make mostly toy cars out of donated scrap wood from a local mill. They make deliveries quarterly and add special drop-offs around the end of the year for Christmas.