Donated by the Dewar family in 1997, the 1927 fire truck required hundreds of hours to restore. Firefighters take pride in the station's rolling piece of history. 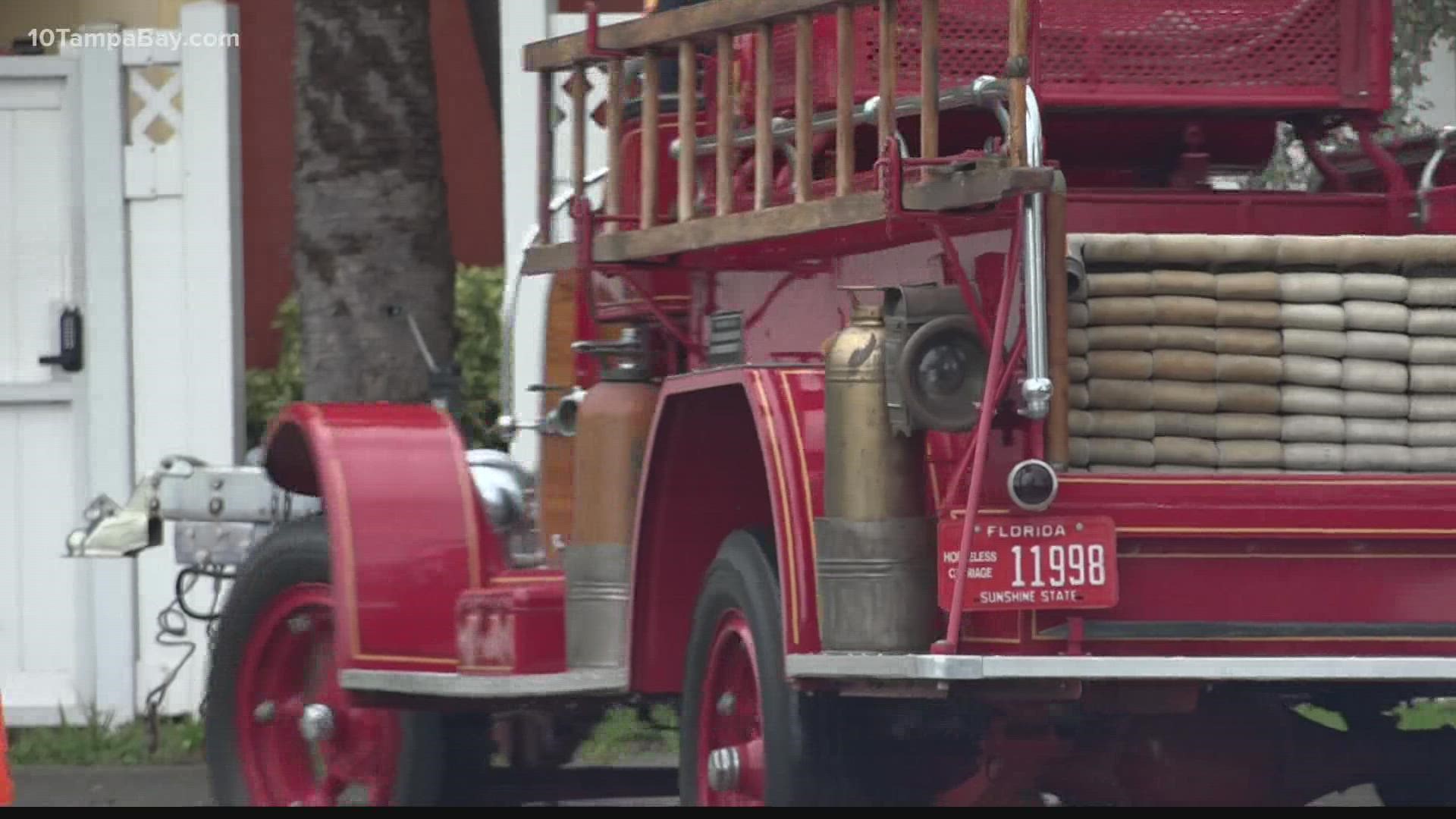 TREASURE ISLAND, Fla. — Station 24 Fire Chief Trip Barrs gripped the wheel firmly as he piloted Treasure Island’s oldest fire engine. He eased up to the stop sign and looked in both directions before pulling out onto 108th Avenue.

It took a great deal of might to turn the wheel of the antique fire truck.

“There’s no power steering so it takes two hands to drive,” he chuckled. “But, you make time to wave.”

The 1927 fire truck isn’t sneaking up on anyone. It’s far too noisy for that. It’s also far too beautiful to not stop and stare as it cruises the streets of Treasure Island.

“I can’t believe it runs. This is amazing,” said Barrs.

In June of 1997, the old truck was donated to Station 24. It had sat as a display piece at a nearby mini-golf course called Gulf Golf, which was owned and operated by the Dewar family. It was given to the station in honor of George C. Dewar right around the time Jeff Logsdon arrived at Station 24.

“To be able to save this historic little relic is priceless. It really is,” said the now-Captain.

Logsdon, and many others, logged over 400 hours of work to restore the engine back to glory. Almost every part is original with the exception of some rubber and a few key, modernized parts like a diesel filter. Only three people at the station are trained to drive it and they usually get it out on the road once a week to share it with the community.

“It’s like a very awesome convertible,” said Station 24 administrative assistant Mercedes Nelson-Palmer with a laugh. “Going to a fire in something like that would be kind of scary in my opinion.”

Captain Logsdon is retiring on Friday. He will miss driving the truck he put so many hours into restoring. He smiled Tuesday morning when looking at an old photograph of the truck on the wall during its Gulf Golf days. He reflected on the hundreds of kids who had their photo taken on its bench seat in the station’s garage.

“That’s pretty amazing if you think about it,” he said. “That’s one thing I like to think about is how much joy this has bought people, not just us in the fire station, but in our community. People love this thing.”

For Barr, the nearly century-old truck really is a treasure. His station has plenty of vehicles to help put out a fire. Only one is a rolling reminder of the city’s history.

“It is kind of neat to imagine how they did it 100 years ago,” he said with a smile.

The community is welcome to take photos with the truck as long as the garage doors are open. Treasure Island’s fire department is located at 180 108th Ave, Treasure Island, FL.