Veteran, 98, rides around to keep his neighborhood clean

What’s not to like about a 98-year-old man who rides his bike three hours per day? 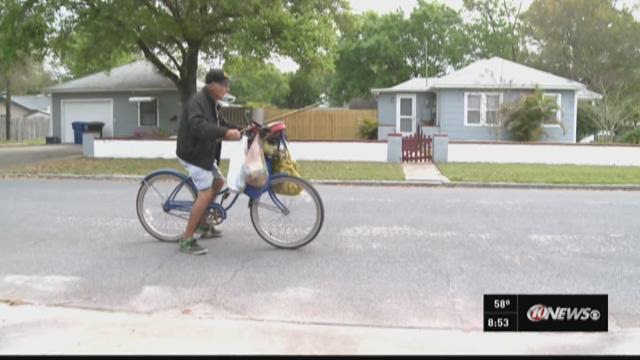 Everyone in the neighborhood knows Donald Nutting.

“Don is a great guy,” said Matt Egan. “We got introduced to him through a neighbor.”

Not only does everybody in the neighborhood know Nutting, they all like him as well. What’s not to like about a 98-year-old man who rides his bike three hours per day?

“He’s always had so much energy and been so young at heart,” said his granddaughter, Linda Enders, with a smile.

Nutting, a WWII veteran, has spent the last 78 years in St. Petersburg. He worked as a carpenter for decades and built many of the houses on his street that his neighbors now call home. It is important to him that his neighborhood looks its best.

That’s where the bike comes in.

“I think that he started the whole route and can collection on a daily basis probably to escape my grandmother a little bit during the day, initially,” said Enders with a laugh. “I bet it’s be 25, maybe 27 years or so.”

Nutting is a man who loves his routine. Every morning he gets up, drives less than a mile to the McDonald’s behind his home for a sausage biscuit, coffee and three cookies.

Then, he returns home to trade in his car for a new set of wheels.

Not even his neighbors.

“He tells me (he rides) 2-6 hours per day,” said Egan. “I think about if he can be out there at 98 years old riding for six hours I can go for a couple mile jog every day.”

When Nutting gets on his bike, he’s on a mission. He drapes plastic bags over the handlebars of his bike and fills them with aluminum cans that he finds around the side streets. Many neighbors leave their cans on the driveway for Nutting to pick up. It’s become part of his life.

Nutting crushes the cans with his foot and stuffs them in his bags. After a few hours of collecting, he returns home to pull all of the tabs off of the lids. He puts those aside. You never know when you’ll need them.

At 98, his routine is surprising. It almost came to a halt, recently, too.

Three years ago, he was hit by a car while crossing 4th Street. He went to the hospital, but no broken bones. His spirit remained intact, too.

Earlier this month, Nutting’s bike was stolen out of his driveway while he took a quite break from his ride.

“The first thing that came to my head was, who steals a 98-year-old man’s bike?” said Egan.

A friend gave Nutting a used bike and a few days later his original was found and returned by a neighbor.

It seems like nothing can keep him from what he loves to do.

"He’s very unique. You talk about the greatest generation, he’s a great example,” said Enders. “He’s still giving all he can to the community.”

Nutting plans to ride as long as his legs can carry him. He has more cans to collect and a neighborhood to keep clean.

I think he’ll do this until the day he dies,” said Enders. “He has a purpose.”

Nutting takes his cans to a recycling center a few times per month where they pay him for his collecting.

Nutting enlisted in the Navy out of high school and served four years (1936-1940) aboard the USS Mississippi before re-enlisting for five more years when the United States entered WWII. He was on the ground in Normandy on D-Day, and received a bronze star and two Purple Hearts.