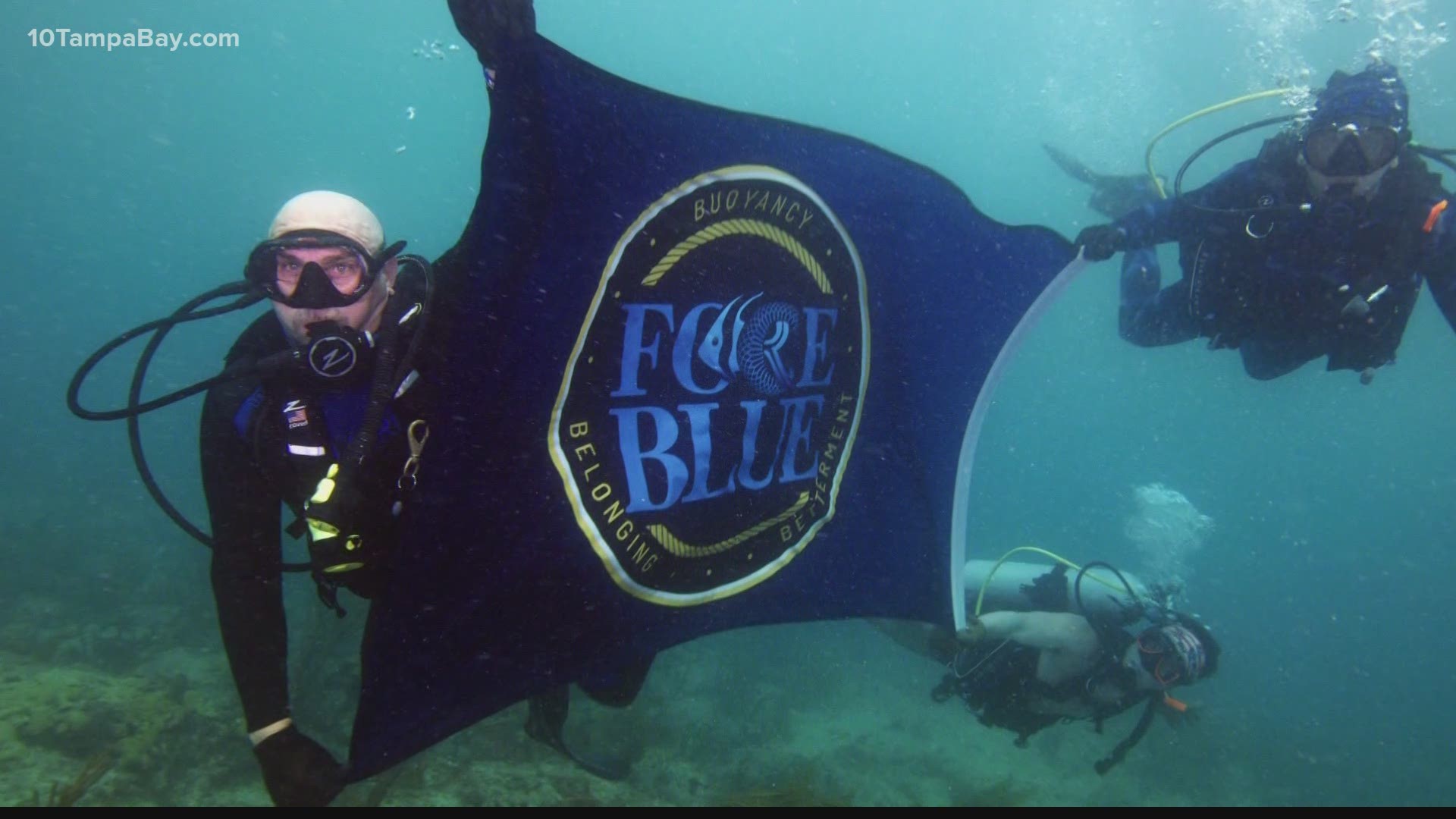 TAMPA, Fla. — Angelo Fiore has spent weeks of his life in the ocean. For over a decade, he served as a diver in the United States Navy, serving in the Gulf War.

Now retired from active duty, he is still spending his days in the water. Now, it’s with a group called Force Blue.

“Rather than defending our country we are out there right now saving the planet,” said the U.S. Navy veteran.

Fiore has been with Force Blue for four years now as the Director of Diving Operations. Force Blue “is the only nonprofit organization in the world that retrains, retools and redeploys former Special Operations veterans and military-trained combat divers to work alongside marine scientists on missions of environmental conservation and preservation," according to its website.

The organization’s latest mission is helping get corals back in Florida waters.

“It’s amazing what collaboration can do,” said Dr. Debborah Luke, senior vice president of conservation at the Florida Aquarium. “It’s inspiring to see veterans and all the other biologists and researchers working together as a team.”

Force Blue and the NFL teamed up during the 2020 Super Bowl in Miami for 100 Yards Of Hope. Divers glued corals to a football field-sized area on the ocean floor in Key Biscayne.

The corals come from the Florida Aquarium’s conservation facility in Apollo Beach.

“It’s a huge facility,” said Dr. Luke, who has been working with the aquarium for about a year.

The easiest way corals are replicated is a process called fragmentation, in which a piece of coral is broken off of an existing animal and it then grows on its own. Dr. Luke calls that “a good tool.” Her issue with that practice is that the “new” growth is essentially a genetic duplicate of the original coral. Her hope is to breed new corals to keep the corals growing more efficiently once transferred back to the oceans.

“Corals only spawn once per year and it depends on the species,” she said. “I’m extremely proud of the collaboration with these parties. Working with veterans and Force Blue has been amazing. We’re all working together as one team to help restore Florida coral reef.”

Florida’s barrier reef is the third-largest barrier reef in the world. Disease and warming waters have threatened it to the point where scientists, like Luke, feel the need to study and preserve it has never been greater.

Fiore likes to point out how Force Blue has helped give veteran divers a sense of community. Studies show 22 veterans commit suicide each day. Having activities like diving, and a community in which to feel apart of, makes a difference for those veterans, he says.

“It’s about giving them a sense of purpose, of mission,” said Fiore. “It’s another mission. Out there rather than saving our country, we’re out there saving our planet.”

Divers have seen spawning from the 100 Yards of Hope site already.

The Force Blue divers will do other underwater outreaches in Tampa to celebrate the Super Bowl’s return here in 2021, including Dive 55 in January near Manatee County to clean up garbage.

“It has been an honor to work alongside Force Blue, Florida DEP and marine scientists to help restore a portion of Florida’s barrier reef” says Susan Groh, Associate Director of NFL Green. “The NFL has supported community greening projects for 16 years around our signature events. Force Blue was the first partner to take us underwater to work on environmental issues. It is inspiring to see special ops military veterans working side-by-side with marine scientists to heal our coral reefs.”

The 100 Yards of Hope project, which originated in the waters off Miami as a way of celebrating Super Bowl LIV, the NFL’s centennial season and America’s military veterans, unites Special Operations veterans from FORCE BLUE and the SEAL Veterans Foundation with marine scientists from the National Oceanic and Atmospheric Administration (NOAA), Florida Department of Environmental Protection, the Florida Aquarium, Phillip & Patricia Frost Museum of Science, and the University of Miami Rosenstiel School’s Rescue a Reef Program — all in an effort to raise awareness for Florida’s Coral Reef, a vitally important, critically threatened national treasure.