Vince Ionata began coaching at age 31. That was 31 years ago. Players love the Dunedin Little League coach, who has helped teach multiple generations the sport. 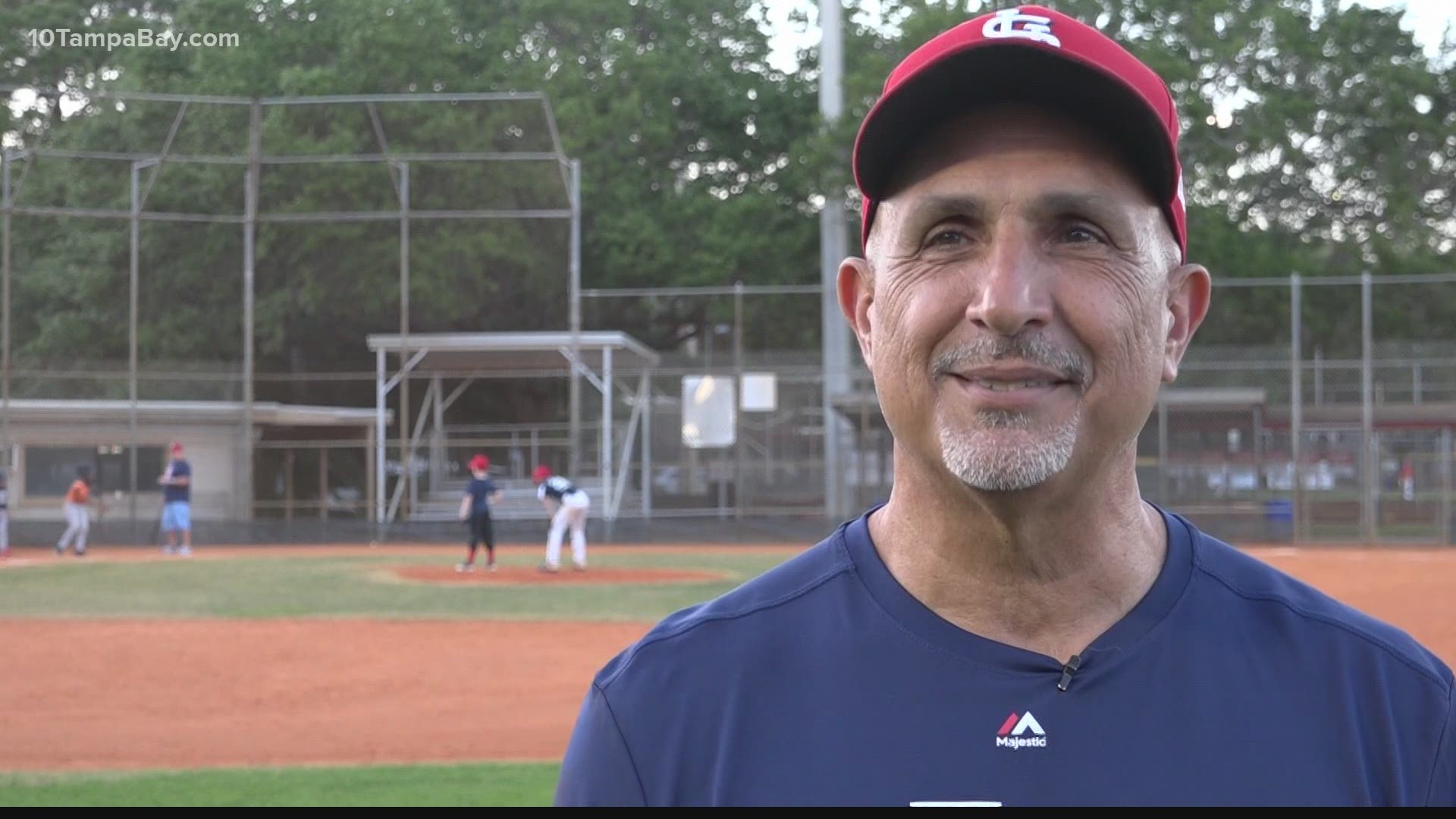 DUNEDIN, Fla. — Charles Stevens looks like an athlete. The muscular right fielder at Calvary Christian High School in Clearwater has a ton of confidence and a powerful swing.

He also has tremendous gratitude for the man who taught him the game.

The high school senior made a trip back to where it all began Monday night. He strode onto the Greater Dunedin Little League field wearing a black Calvary t-shirt and approached a circle of kids. He interrupted their practice to hug their coach before flashing a smile at the 11-year-olds. Coach Vince Ionata’s smile was even wider than Stevens’.

For 31 years, players have been building a special bond with the volunteer coach.

"It’s a lot of fun," said Ionata, who coached Stevens a decade ago on those same fields. "In the offseason, I drive by and I almost automatically turn left."

Stevens sat and watched a little bit of practice. He looks at Ionata as a father figure. He lost his dad at a very young age and found stability and guidance from Ionata on the diamond.

He’s not the only one.

"This isn’t just a coach for me anymore," said Stevens, who earned a baseball scholarship from Butler University. "This is someone that truly loves me and cares for me and that’s something I’ll never forget."

While Stevens spoke glowingly of his former coach, Ionata paid no attention. He was too focused on his newest crop of kids. He slapped ground balls at infielders, pop flies to outfielders, and gently corrected mistakes for over an hour at Dunedin Little League.

He began coaching kids there are age 31. That was more than three decades ago.

"I wouldn’t be doing it if it wasn’t fun," said Ionata, a St. Louis native.

His dedication to kids has long outlasted his own children’s playing days. Two of his daughters played softball at Dunedin. Most coaches who volunteer to coach their kids wind up leaving their dugout days behind when their own kids grow out of the sport. That was not the case for Ionata, who has coached multiple generations of players in Dunedin.

"He took him and molded him into the young man, the baseball player he is today," said Stevens’ mother, Terri. "I tell (Ionata) all the time, he is who he is because of you."

Ionata has worked as a Facilities Manager for Achieva Credit Union for seven years. The company, knowing Ionata’s love for kids and local baseball, Achieva was "quick to shift their support from local professional teams to youth teams to sponsor Vince's Dunedin team."

"That comes back tenfold. They are our top sponsor," said Ionata, opting not to share exact figures, but emphasizing that Achieva’s donation to the Dunedin Little League program was "significant."

Ionata shares in his player’s successes, too. Stevens slapped the game-winning hit in the 4A State Championship game for Calvary in 2019. He called it his greatest on-field moment. But, not far behind are the memories of playing under Ionata.

Stevens almost quit baseball at eight. He was not enjoying the sport and didn’t like his coach’s win-at-all-costs styles. Ionata convinced Stevens to give baseball one more try – this time on his team.

The move made Stevens fall in love with the sport again.

The same question creeps up after every season – when will Ionata walk away from his little league role? His answer is always the same. One more year.

After more than three decades on the diamond, the fun hasn’t faded.