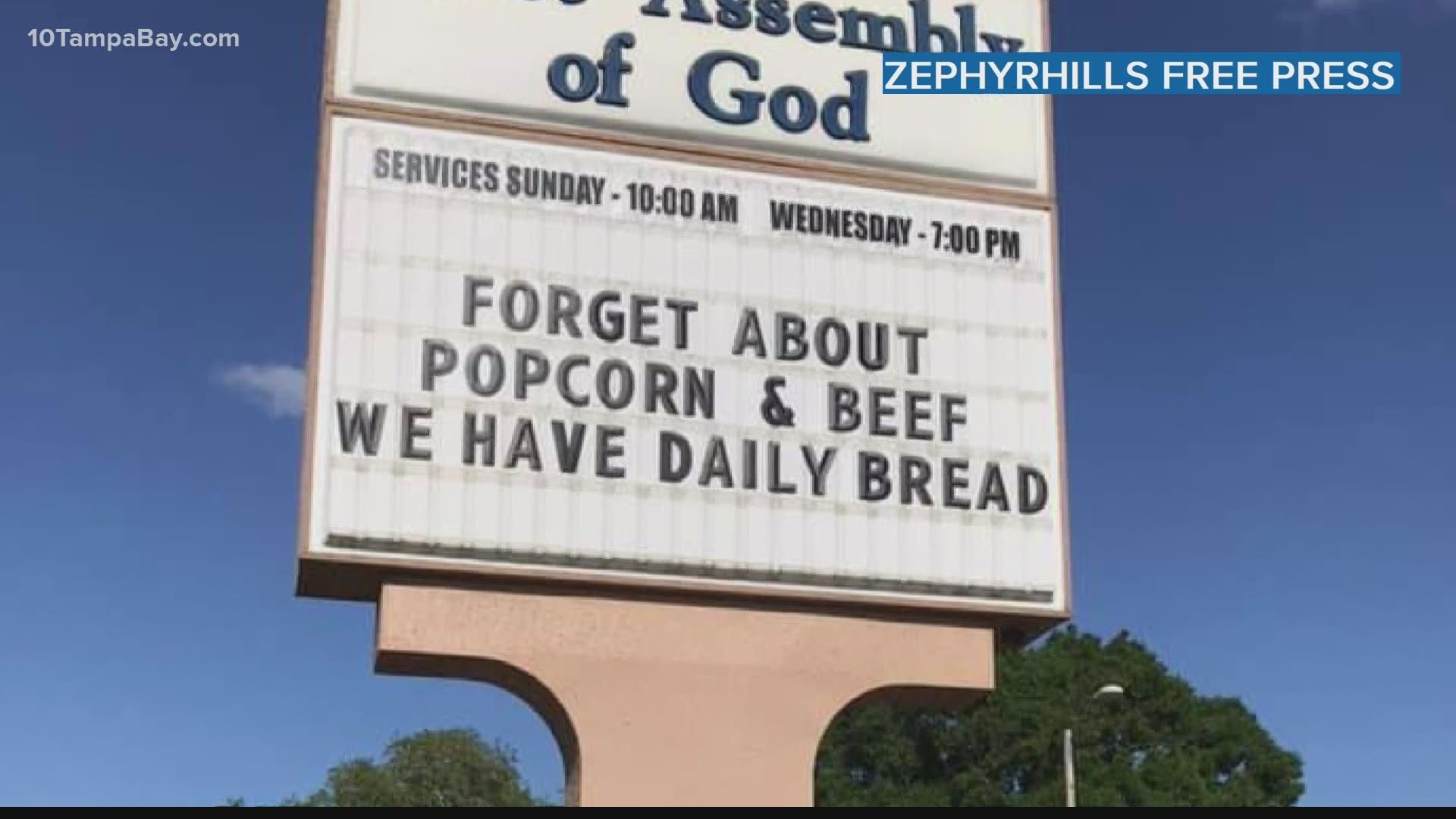 ZEPHYRHILLS, Fla. — What started as a good-natured bit of banter between neighboring businesses has overtaken an entire city. Larry Rutan started a sign war in Zephyrhills.

Now, everyone is benefitting.

Rutan has spent over 30 years operating Zephyrhills Cinema 10. Just next door, Scott Tuttle has been operating the Golden Corral restaurant with his father and wife since 2003.

Last week, Rutan’s manager updated the marquee in front of the theater with a message for Tuttle.

“I think the wording was, ‘Golden Corral, are you ready for a sign war?’” said Rutan.

“I was definitely up for it,” he said. “This is a great new phenomenon for us.”

The phenomenon was simple: Fun banter back and forth between neighboring businesses designed to promote each other to passersby. Neither Rutan nor Tuttle thought the fun would expand from there.

“I love seeing them. In fact, we drove up and ate at Golden Corral, I think it was two days ago because I wanted to see their new sign,” said Tim Skolrud, who took over as the lead pastor of Zephyrhills First Assembly of God in February 2020.

“It’s been positive again last year’s been tough on everybody. Just to see people’s smiles and all of that, it’s been fun for us.”

Skolrud couldn’t help getting in on the fun. One of the staff members at the church put up their own sign, which read: “Forget about popcorn and beef. We have daily bread.”

Other businesses followed the trend until dozens of businesses across Zephyrhills were participating in the sign war.

“Just for everybody to pull together and have a lot of fun with it, I’m loving it,” said Tuttle, who said he’s seen a bump in customers this week since starting the war with Rutan. “I think I’ve gotten more feedback on our marquee since I’ve had it installed. I wish I would have thought of this years ago, of using the sign this way, of marketing other places.”

The camaraderie has been the best part for Rutan, who has also seen an uptick in customers since his first marquee message. The local bowling alley is participated, along with collision centers and breweries, too.

"It doesn’t cost anything,” he said.