A journey for Grandpa.

SAINT PETERSBURG, Fla. — Kim Galway is about to go on an adventure of a lifetime, all for a promise. Galway’s grandfather was Capt. George Blackburn, who served in World War II. Her goal is to bike 1,000 miles from Juno Beach, through Normandy, Belgium, Holland and France, and end standing on the same German soil her grandfather stood on on VE Day. This will all be shot and turned into a documentary to hopefully be shown in schools across the country. To support this film and follow Galway go to victoryjourney.com.

RELATED: The skinny on lash extensions

RELATED: Taste of the Meat Market 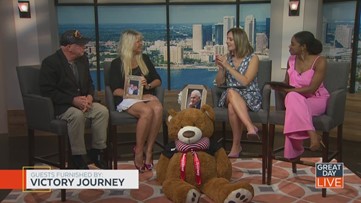