Why does she bother teaching the finer points of conduct to men who’ve had trouble with much more than manners? 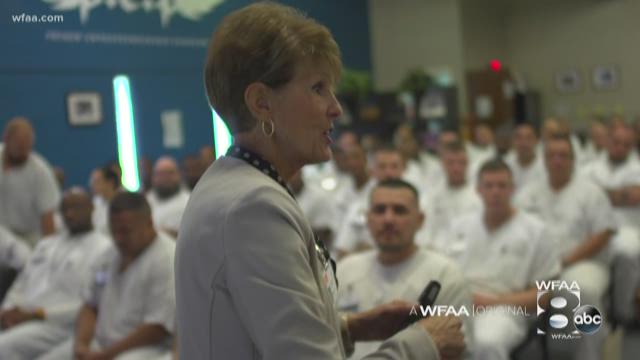 If there is a ‘proper’ way to go to prison, it must be to sashay right in because that’s exactly how a woman who specializes in correctness recently entered the Cleveland Correctional Center north of Houston.

Colleen Rickenbacher, an etiquette expert by trade, was asked years ago to talk to some prisoners about manners. "I was petrified. I am going to go to prison and do this?" she said.

It went so unexpectedly well that Rickenbacher now returns 10 to 15 times a year. "There is just something -- a draw here," she said. Rickenbacher has found that helping inmates comes with a question..."people say why do you volunteer for them?"

Why does she bother teaching the finer points of conduct to men who’ve had trouble with much more than manners? Men who have been convicted of sex crimes are ineligible.

Beyond that, the group of men in Rickenbacher’s classes has committed a whole range of crimes. "Aggravated assault, aggravated robbery, manslaughter, and murder,” to name several said Bert Smith, who oversees the Prison Entrepreneurship Program, or PEP. "What we are trying to do is help these men find their God-given talents," he said.

Prisoners in the program develop a post-incarceration career and business plan. Executive mentors from various fields volunteer to guide the men while they are still locked up and to continue assisting them after they get out.

"There's a camaraderie, a bond that forms," said John Harrell, a retired CPA. Harrell and the other executives help the inmates refine their business ideas. "I have heard some really great ideas. I have seen some successful businesses started out there. And I have heard some terrible ideas," he said.

As they work on that, Rickenbacher helps the men refine themselves. "They get my book, and they read it cover to cover. It's very humbling. I feel like it is something they need and something they appreciate. There's a calling I guess you could say," she said.

An inmate identified as Quinton hopes this program and Rickenbacher’s advice can help him overcome a serious record. “I have been down three times. I have been to prison three times. And my previous times in prison I always told myself I would get out and be a better criminal. I was a career criminal. My record has things from theft to burglary to selling drugs and carrying guns. I was just a menace to society. Now I am trying to be a better person...to do right," he said.

But Quinton, like most of his classmates, lacks some basics. “I never really thought about tying a tie," he said.

Rickenbacher polled the room of more than 100 inmates. “When they raised their hands, three-fourths of them have never tied a tie in their lives," she said. Something that simple could make a big difference in the working world.

Rickenbacher enlists a few volunteers who know how, and the whole group learns, hands-on, together on how to do it. “A lot of these gentlemen are 20, 30, 40 years old and watching them tie a tie for the first time in their life, it’s amazing,” beamed Rickenbacher.

That’s one of many pointers she gives regarding attire. "When we talk about dress and appearance, think about it. If you have been out of society 25 or 28 years, things have changed," she said.

The day-long lesson also includes table manners. Here are a few snippets we overheard. "Your fork is going to go on the top, and it is always going to be facing to the right. Pretend this is the bread. Never ever cut the bread," she said.

She also teaches the important nuances of a proper handshake, "Web to web. Remember that because I don’t want, wimpy, wimpy. I want shoulder-to-shoulder, so you can be eye-to-eye, face-to-face, and heart-to-heart. So two shakes and that's it."

But the most popular demo—how to appropriately ask someone out. The men try out a few lines on Rickenbacher:

“I find you extremely beautiful and extremely intelligent, and I am wondering if you would like to go out with me so I can get to know you better?"

"I would like to take you to brunch would you indulge me?"

"I have noticed you before and thought you had a nice personality, and I would like to take you to dinner would you like to go?”

"Is there any way you would like to go out for a picnic or something?"

The exercise seems so simple. An inmate named Adam, who has spent a lot of time in the lock-up for aggravated assault, explains that the social help is critical because sometimes the thought of getting out can be more intimidating than being in. “There’s lots of anxiety. Anytime I think of how my re-entry could play out," he said.

Some people might think these convicts even deserve this help. Cleveland Correctional Center Warden Michael Upshaw said these men are on track to get out. And they can either leave changed or as unreformed lawbreakers. "It's not any of our wishes or desires for these men to go home for six months. Go home, come back. Go home, come back," Upshaw said.

And the PEP’s Bert Smith said stats show inmates who complete this course are far less likely to re-offend. "Our recidivism rate for our graduates is around 7 percent, which is less than a third the rate of similar felons who are released from Texas prisons," Smith said.

Inmate Quinton believes this will turn his life around and his son’s life too. “I got a letter from my son the other day, and he said it felt like I don’t love him. I haven’t seen him since he was one. He’s 8 now. I want to spend a lot of time with my family," Quinton said.

That’s the answer to that question why Colleen Rickenbacher volunteers for these men, “What I feel like I give them is actually going to help them get back into the world. This is the most fulfilling thing I have ever done in my life.”