A family friend and caretaker of the veteran said he's facing eviction, partly because of damage from Hurricane Irma that he can't afford to fix. 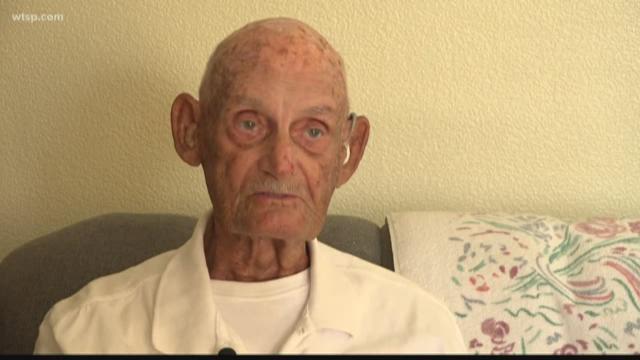 WINTER HAVEN, Fla. (WTSP) -- A 96-year-old World War II veteran faces eviction from his Winter Haven mobile home this week, according to his family friend and caretaker Karen Bingham. She said it's partly because of damage from Hurricane Irma that he can't afford to fix.

The army veteran has been through trying times before. Hurricane Irma brought more. The winds ripped up his carport and the roof of his home. Bingham said for months, water’s been getting into the home.

“It's been a huge concern that he's going to become ill from the mold and mildew or slip and fall in water,” she said.

Lebrun hasn't been able to afford the repairs. Bingham said FEMA declined his request for help.

On top of that, she said he'll be evicted Friday, because of the damage and other smaller problems with his home.

“It is very frustrating,” she said.

Bingham posted her frustrations on Facebook. It's been shared more than a thousand times.

I am so disgusted right now! This is Lucien "Chet" Lebrun, he is a 97 year old WWII Veteran.He has made so many...

The right people have seen the post. Thanks to a few local businessmen, if everything goes according to plan, Lebrun will be moving out of this mobile home and into a new one just up the road in a few days.

“I was actually in tears for a little while,” Bingham said. “It was just a godsend.”

A GoFundMe has also raised more than $8,000 for furniture at the new place.

“Sometimes when you think people just don't care, it comes together and you get new hope and you start to believe in people again,” she explained.

Lebrun is ready for the move.

“I've been here too long,” he said about his current mobile home park.

Bingham is grateful to see this member of "the Greatest Generation" is being treated that way.

We also reached out to the mobile home park to ask why they're evicting Lebrun but haven't heard back.