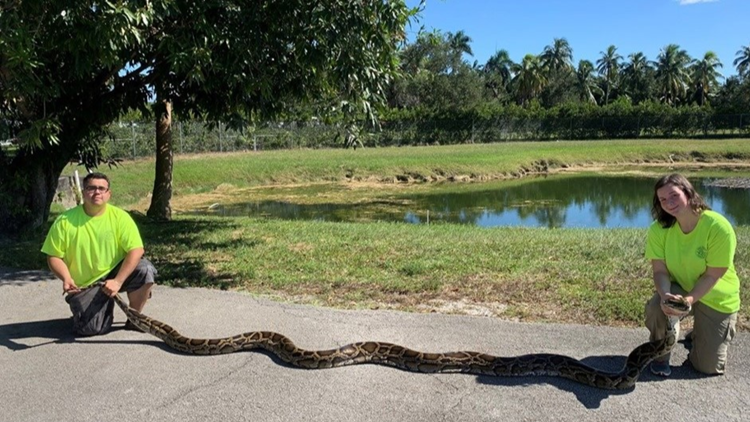 MIAMI — A snake this size is not something you’d want to come across.

The 98-pound monster of a snake was captured at the Big Cypress National Preserve.

Not only does FWC say it’s the biggest python their team has caught, but they’ve also reached a milestone of removing more than 900 invasive Burmese pythons from the Everglades.

Burmese pythons are not native to Florida and have devastated the state's native wildlife. The snakes eat rabbits and birds and compete for food with other predators like bobcats and Florida panthers.

The South Florida Water Management District has voted to double the number of hunters in its Python Elimination Program.

The program was launched in 2017 and is responsible for the removal of more than 2,500 snakes since then. In a vote of confidence, the governing board also decided to triple the program's funding.

MyFWC
Record breaker! This huge 18' 4" invasive python is the largest ever... captured by our Python Action Team! Not only did we reach the impressive milestone of removing more than 900 invasive Burmese pythons from the Everglades, but Cynthia Downer and Jonathan Lopez brought in this 98 pound, 10 ounce snake from the Big Cypress National Preserve!

RELATED: Florida is hiring twice as many python hunters to get rid of the invasive snakes