Dogs were found all over the home in Kellogg, Idaho, even in the walls. 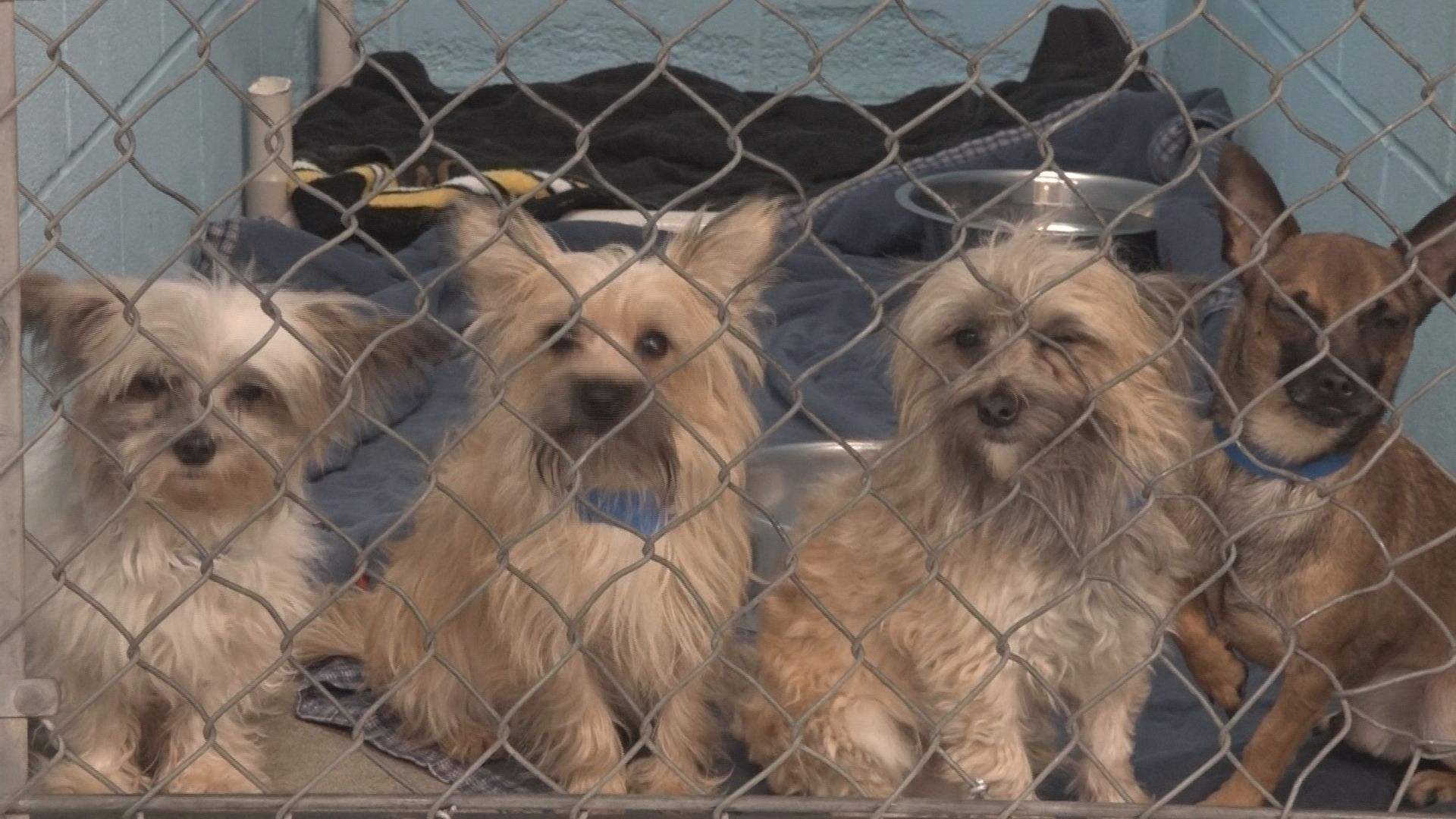 The Kootenai Humane Society reported that they found 85 dogs abandoned in an evicted renter's house in Kellogg, Idaho on Monday night.

Shoshone Pet Rescue got a call on Monday morning. The caller said they were a friend of the evicted and they knew of some animals in trouble. The rescue found out there were 30 dogs left inside the woman's home. They called in Kootenai Humane Society for help. Thirty is already the largest number of dogs the society would have rescued but they were in for a surprise.

"She said, 'there are 64 dogs,'" KHS Executive Director Debbie Jeffrey said. "And my heart just dropped."

That wasn't all. There were dogs upstairs, downstairs and even hiding in the walls, Jeffrey said. There were 85 dogs: nine puppies aged four weeks to six weeks old, eight others sent for medical care at an animal hospital, five mothers ready to have their babies, one found dead, one needing to be euthanized and 66 now safe with Jeffrey.

"The neighbors didn't even know she had dogs," Jeffrey added. "What I can't imagine, is how you have 85 dogs in a house, and nobody hears barking."

The owner of the house was evicted on Thursday and the officer that served her told Jeffrey that he didn't hear any dogs barking. She and the Kellogg police believe the woman locked the dogs in the basement, so no one could hear their barks. They never smelled fresh air, felt the grass on their paws or had space to run and play.  The dogs were well fed, but they were filthy. The dogs reeked of urine, she added.

She knew she had to move quickly to save them. It took two hours, but Jeffrey and her team were able to input as many dogs as they could and find foster homes for the puppies and mothers.

85 dogs were found abandoned in a North Idaho home. Here is the footage from Kellogg Animal Control that was sent to Jeffrey.

"People ask me all day, 'why did you say yes?'" she said, starting to tear up. "Because my heart. My heart. If those dogs hadn't been taken out of that house yesterday, the outcome wasn't going to be good. They were going to have to euthanize some of them."

As for the dogs' owner, KREM 2 wasn't able to connect with law enforcement. Currently, the woman is not in custody or charged formally. According to Jeffrey, she is believed to have fled to the Seattle area on Thursday night. Officers are building a case against her with charges including abandonment, neglect and cruelty. In the meantime, Jeffrey is just glad her team got to the dogs in time to save the majority of them.

"Our mission is to help animals," she said. "You need the compassion, because this job is hard, and it has long hours. But at the end of the day, we've saved 66 animals, and what can make people happier than that?"

Each of the dogs are adoptable by appointment only. Jeffrey said the dogs that were found were surprisingly sweet and receptive. She also said they were mostly in good health. While those who work in animal shelters often see horrible cases of neglect and abuse, Jeffrey said she is grateful that she can help.

KHS expects that some of the 85 dogs will be available as early as Thursday.

"They're nice, they were not abused, you know they are not starved, they're there, they're plump, there's a couple that have been sick but in that situation, it's not uncommon to have some sickness," Jeffrey said.

The Humane Society needs help. They now have five dogs in cages that typically take just one. They have been raising money to build a bigger facility - they take donations online, as well as keeping a Wishlist for their largest needs for the animals.

"I look at all the good we do. I mean, we can take a lot of dogs out of the high kill shelters across this country. And we are very successful in finding them homes. And at the end of the day that's what that's what your mission is to help animals," Jeffrey said.

The organization is currently working to microchip every dog and get them to safe, loving homes.

To donate to the shelter, visit www.kootenaihumane.org.