What other sea animals live at Clearwater Marine Aquarium?

The aquarium is also home to many other animals with conditions that require them to live at CMA full time. 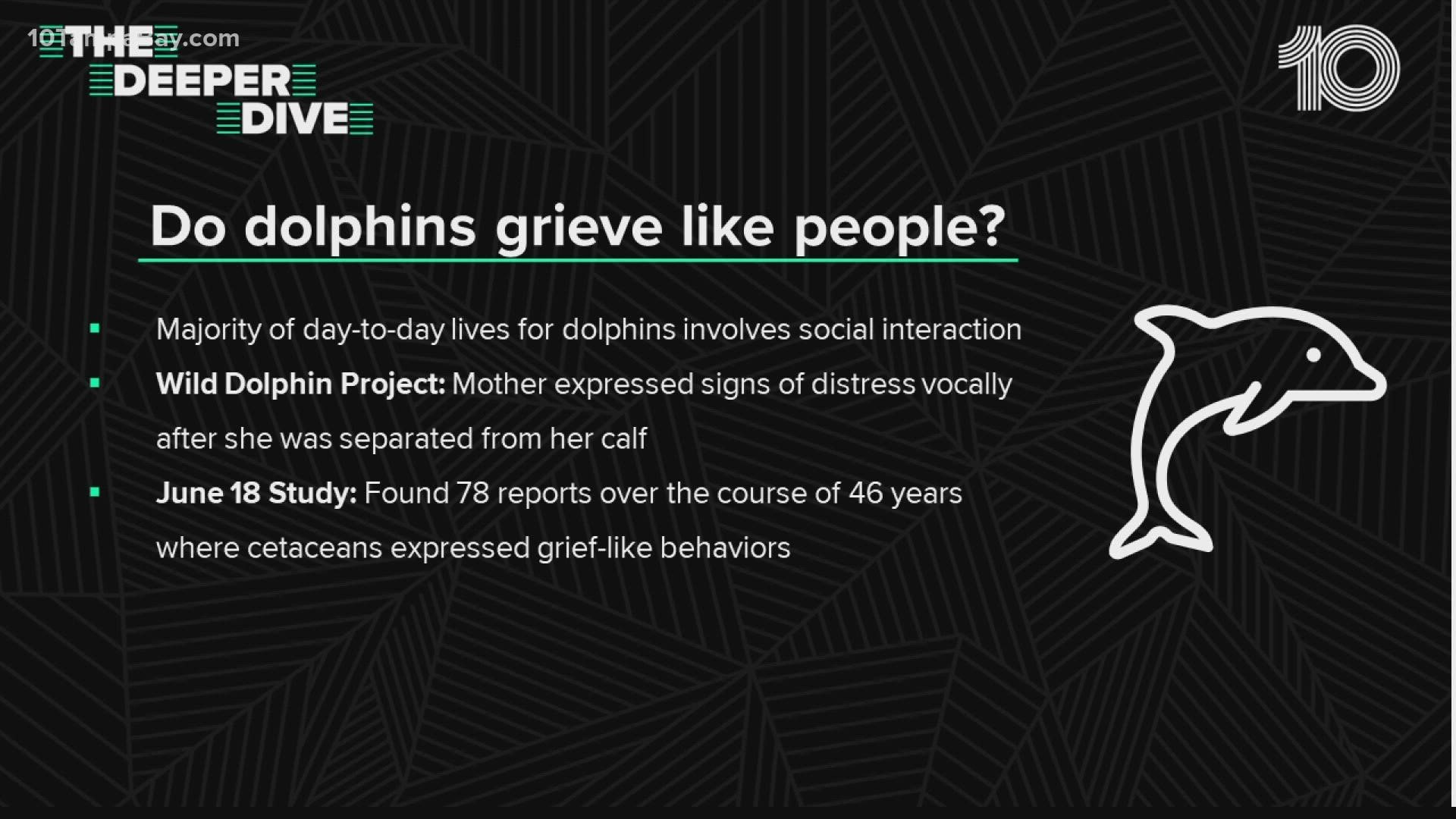 CLEARWATER, Fla — Clearwater Marine Aquarium reopened Saturday after closing Friday to allow staff the time to mourn the loss of their beloved Winter the Dolphin.

Although Winter is no longer at the facility, her presence will always be felt at Clearwater Marine Aquarium where there is a banner hanging to remember her. In addition, visitors have dropped off flowers in her honor and you can't miss the "Winter Zone" of the aquarium where both Dolphin Tale and Dolphin Tale 2 were filmed. Winter was a crowd favorite as one of the resident dolphins at the rescue and rehabilitation aquarium.

As visitors begin returning to Clearwater Marine Aquarium, there are many other dolphins to see that have conditions that require them to live at the aquarium full time. Among the residents include Hope the Dolphin who starred in Dolphin Tale 2 with Winter.

Let's waltz through the neighborhood of residents of the Ruth & J.O. Stone Dolphin Complex at CMA.

Hope is an 11-year-old Atlantic bottlenose dolphin who lives at CMA. As stated before, she starred in Dolphin Tale 2 with Winter. She was actually rescued as a calf in December 2010, five years after Winter was rescued, near the same area as Winter in the Indian River Lagoon. Since her rescue, CMA has nursed Hope back to health and she has been "flourishing" at CMA. She's even learned several helpful behaviors for "medical care, mental stimulation and exercise," CMA says.

Nicholas is another Atlantic bottlenose dolphin at CMA. The 18-year-old dolphin and his mother were rescued when Nicholas was just a calf on Dec. 24, 2002. The two were stranded near Gibsonton, Fla., and were initially taken to the Florida Aquarium then transported to CMA for long-term medical care, CMA says. Nicholas' mother, who the aquarium named Noelle, died after suffering from injuries sustained before she was rescued. While Nicholas was able to make a full recovery, CMA says, since "he did not have his mother to teach him how to survive in the wild, he became a permanent resident at Clearwater Marine Aquarium."

PJ is one of the oldest dolphins who lives at the dolphin complex. The 50-year-old Atlantic bottlenose dolphin was rescued in August 2018 after CMA says she was found stranded in the shallow water of Old Tampa Bay. Due to several medical issues, PJ was deemed non-releasable and became a permanent resident to live out the rest of her life.

Hemingway, not to be mistaken with Ernest Hemingway the author, is a 27-year-old Atlantic bottlenose dolphin that was rescued back in July 2019. He's one of CMA's newest resident dolphins, actually. Hemingway was stranded in the shallow waters of Fiesta Key, Fla., CMA says. He was rescued and treated at SeaWorld for pneumonia and significant weight loss, but as he got better, caretakers learned that he suffered from ongoing health issues and hearing loss. His condition made him non-releasable. Hemingway arrived at CMA in July 2020 and became a permanent resident.

Rudolph, or Rudy, the rough-toothed dolphin, arrived at CMA in December 2019. He also happens to be the aquarium's first rough-toothed dolphin resident. It's estimated that he's somewhere between 2 and 5 years old, CMA says. Florida Fish and Wildlife Conservation Commission (FWC) found Rudolph stranded in Sanibel, Fla. in Dec. 2019. CMA received Rudy in critical condition but over time he recovered. While recovering, CMA learned that Rudy suffered some hearing loss that affected his ability to echolocate, which could impact his ability to locate food. He was determined to be non-releasable and National Marine Fisheries Service (NMFS) chose CMA as his new home, knowing CMA's history of excellent care for dolphins with hearing loss like PJ and Hemingway.

Rex was brought to CMA to be a companion for Rudy. How sweet!? The rough-toothed dolphin was rescued off St. George Island, Fla. in April 2019. He's believed to be somewhere between 5 and 7 years old, CMA says. Rex suffered from lung issues likely caused by aspiration and fungal pneumonia when he was rescued. It was later determined that he also suffered from hearing loss and NMFS deemed him non-releasable. Initially placed in the care of Gulf World, his close age to Rudy made him the perfect candidate to move over to CMA where the two are able to socialize, which is "critical to the welfare of dolphins" when it comes to "social development and reducing stress," CMA says.

RELATED: Do dolphins grieve the loss of other dolphins?

In addition to dolphins, CMA is home to other rescued animals. The rescued residents include two otters named Walle and Boomer, twelve sea turtles, four pelicans, a nurse shark named Thelma, many stingrays and other marine animals.

Winter the Dolphin died Thursday at the age of 16. The Atlantic bottlenose dolphin who inspired millions after losing her tail flukes as a calf defied the odds of her disability and taught many others along the way after she starred in the movie, Dolphin Tale.

CMA announced Thursday night the heartbreaking news that Winter the Dolphin died after days of fighting a gastrointestinal infection. A necropsy revealed the preliminary result of death was intestinal torsion. CMA Veterinarian Dr. Shelly Marquardt explains this is when the intestines "twist on themselves" and cut off the blood supply to the intestines.

In a tweet from CMA on Saturday, they said their animal care team is showing their other resident dolphins some extra love since Winter's death.

We've seen your messages asking how our resident rescued animals are currently doing. Our dedicated team continues to provide the highest quality of care 24/7.

At this time, our animal care team is giving them extra love and attention.

They have also been checked and cleared for any illnesses, CMA says. The vets found no signs of illness and the dolphins are "acting normally."