Emma and Bubbles are now healthy and swimming in the Florida Keys. 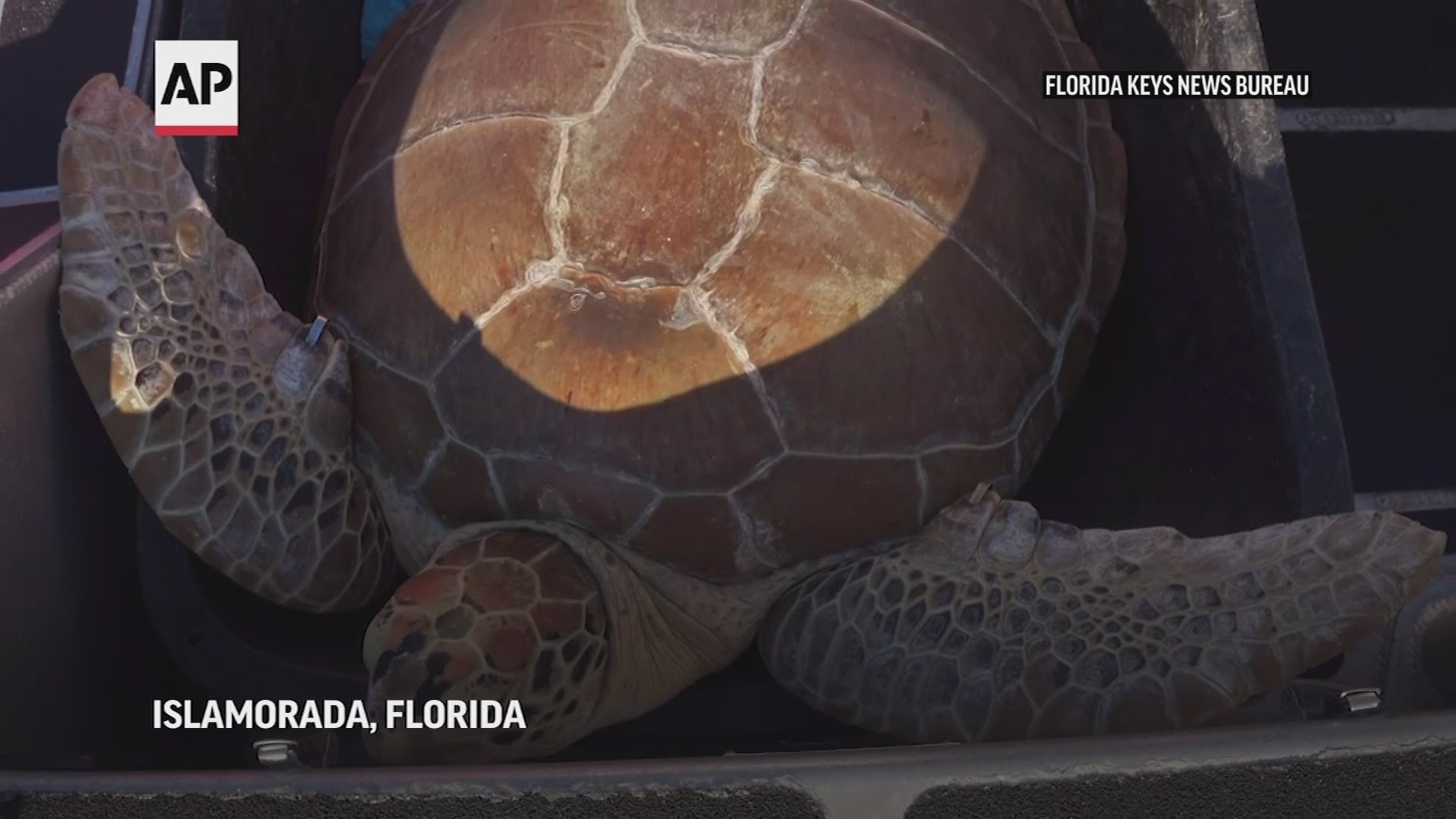 Both were taken to the Turtle Hospital in Marathon for care. Bubbles was treated for pneumonia. Emma got excess air removed from her body cavity, along with getting fluids and vitamins.

Credit: AP
In this aerial drone photo, provided by the Florida Keys News Bureau, staff from the Florida Keys-based Turtle Hospital and U.S. Coast Guard release "Emma," a loggerhead sea turtle, Thursday, Aug. 6, 2020, off Islamorada, Fla. "Emma" was one of two turtles Coast Guard personnel helped to rescue about two months ago off the Keys that were treated at the Turtle Hospital for various ailments. (Bob Care/Florida Keys News Bureau via AP)

The endangered sea turtles were released Thursday by some of the same U.S. Coast Guard officers who helped with their initial rescue.

"It's very fulfilling to see the final result of a turtle rescue. In most of our cases involving people, it's kind of an open and shut case," said U.S. Coast Guard First Class Petty Officer Michael Lees. "Rarely do we get to see the actual release of the turtle. And that's very fulfilling. And we're very grateful that we were allowed to do so."

U.S. Coast Guard Station Islamorada and The Turtle Hospital released two sea turtles, Emma and Bubbles, back to the ocean today. Emma is a female a 150 lb. #Loggerhead and Bubbles 225 lb. is a green sea turtle. Station Islamorada and U.S. Coast Guard Station Marathon, respectively, originally assisted rescuing the two turtles in June. Part of the U.S. Coast Guard's Living Marine Resourse statutory mission includes assisting in preventing the decline of marine protected species populations, promoting the recovery of marine protected species and their habitats, and partnering with other agencies and organizations to enhance stewardship of marine ecosystems.

Veterinarians with the Turtle Hospital in Marathon say both species of turtle are endangered. They live in different habitats off the Florida coast, so they were released in different areas.

Green sea turtles, like Bubbles, are taken about 20-miles north of Marathon in the Florida Bay. Loggerheads, like Emma, are taken out much further into the gulf or ocean.

Some of the creatures the Turtle Hospital has helped are now racing in the annual Tour De Turtles to raise money for conservation efforts. This year the Sea Turtle Conservancy is holding separate Tour de Turtles Marathons for the leatherbacks and the non-leatherback (chelonians).

Credit: AP
In this photo provided by the Florida Keys News Bureau, Turtle Hospital staff members including Bette Zirkelbach, middle, and Richie Moretti, right, watch over "Emma," a loggerhead sea turtle, front, and "Bubbles," a green sea turtle, back, before they left the dock on a U.S. Coast Guard boat to release the reptiles Thursday, Aug. 6, 2020, off Islamorada, Fla. Both turtles were rescued by the Coast Guard in June, suffering from various ailments, and recovered at the Florida Keys-based Turtle Hospital. (Bob Care/Florida Keys News Bureau via AP)