They're tasked with mastering 40 different commands and, of course, not all dogs are up to the challenge. 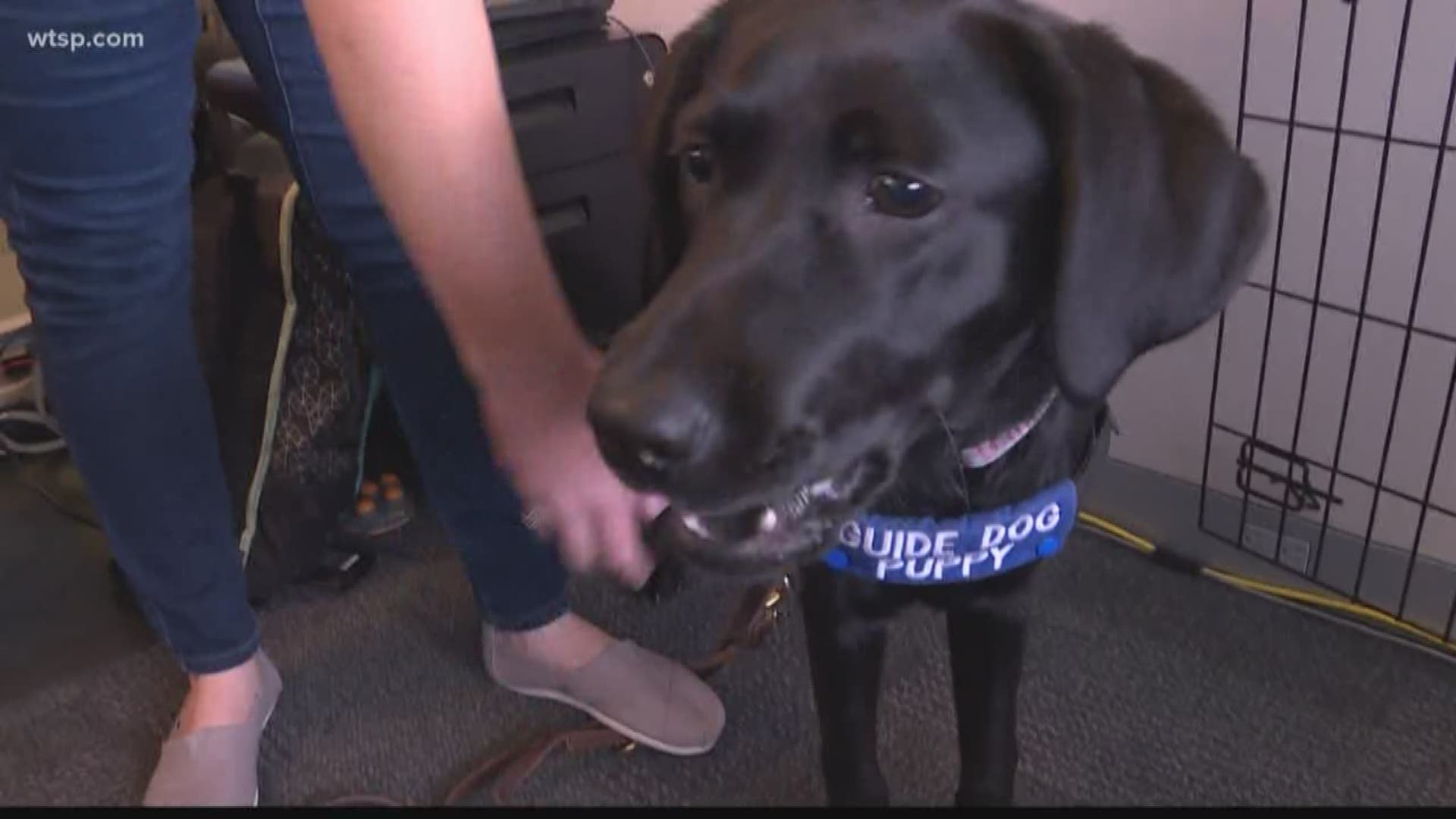 PALMETTO, Fla. — Imagine having brand-new baby, taking that child home and raising your baby for a year -- only to have to hand that child over to someone else.

“She’s definitely my baby:" That’s how Steph James describes Jo-jo, a black lab who is 7 months old. In six months, Jo-jo will go to school to become a guide dog.

James is the regional director and puppy raiser for Southeastern Guide Dogs. It’s something she has done twice before, but the end is never easy. Right now, she and Jo-jo are at the halfway mark.

“I just always thought it would be so cool,” James said. “You can take this dog with you and then it goes on to help someone and change a life.”

Puppy raisers have to take these dogs into different places to expose them to people, sounds and situations that would excite any dog. No matter who gets Jo-jo, she will be able to keep that person safe.

The training takes her to places like St. Pete-Clearwater International Airport. The goal is for the dog to, one day, be skilled enough to guide a person who has no vision through an airport.

Guide dogs are the “best of the best.” They have to master 40 different commands and not every dog reaches that rank. Some go on to become different types of service dogs. What Jo-jo becomes depends on her strengths.

No matter what she does, James knows Jo-jo will make a difference.

“Being a service dog is just as cool,” she says, “just as life-changing because sometimes these people haven’t gotten out of bed, for like, months at a time.

Jo-jo could be a skilled companion dog to assist a child with hearing loss, a therapy dog or an emotional support dog. There are endless possibilities. The first dog James raised, Conway, is now a service dog for a veteran who suffers from severe PTSD.

“They can do things that they couldn’t do before,” says James, wiping away tears, “like, the person who got our dog, Conway, she has to be in large crowds, a lot, and that’s something that’s really hard for her. So she can do that, now that she has him, and she can travel the country.

"She’s traveling alone, so that was just really amazing. Sorry,", James says through tears, "it is really good, though.”

Her second puppy, Celia, was in her wedding.

“Celia was our ring bearer,” she says with a grin. “She’s in her second phase of guide dog training, and she’s doing really well…you give life to these people, so it’s pretty awesome.”

A lot of people respond to the dog at the airport. Going through security, a woman turns around and sees Jo-jo, noticing her guide dog puppy vest. She reaches into her wallet and hands a bill to Steph.

“I want to contribute to your service,” she says. Sherry Wallace, a traveler from Ohio, said, “I’ve always wanted to give to any guide dog service for their endeavors with the trainers.”

James thanks her for the donation. And Jo-jo aces going through security, following commands to “sit” “stay,” and “go.”

Little kids rush up to Jo-jo. This is not her strongest area, as kids get her very excited. She is trying to jump, with James holding her leash close to her neck. An 18-month-old and two little boys approach, asking if they can pet Jo-jo.

She enters the area, backs up, and re-enters the area, each time Jo-jo jumps. Finally, she is still. The baby walks up and gently pets the dog. Then, as if on cue, she claps her hands with delight. The performance is a big victory for this dog.

Jo-jo and James went to a coffee shop, the grocery store, even on a trolley ride in downtown St. Petersburg. She wants people to know that everyone can do this, and everyone thinks they’re failing when it’s their first time.

“I freaked out over everything. I thought I was doing everything wrong. I was super paranoid. I was like, ‘Oh my gosh, he’s not going to make it.' He’s not going to be a service dog, because I messed something up," James said. "But, like, by my second and third dog, I’m like, ‘Oh no, if you love them and you do their training, they’re amazing dogs.’”

And that makes what will happen six months from now so much harder. Jo-jo will go to canine university. From there, she will be paired with someone who needs her.

“It really is life-changing,” she says, choking up at the thought. Parting with Jo-jo is a sacrifice that will break James’ heart, but she has no doubt it will heal someone else's.