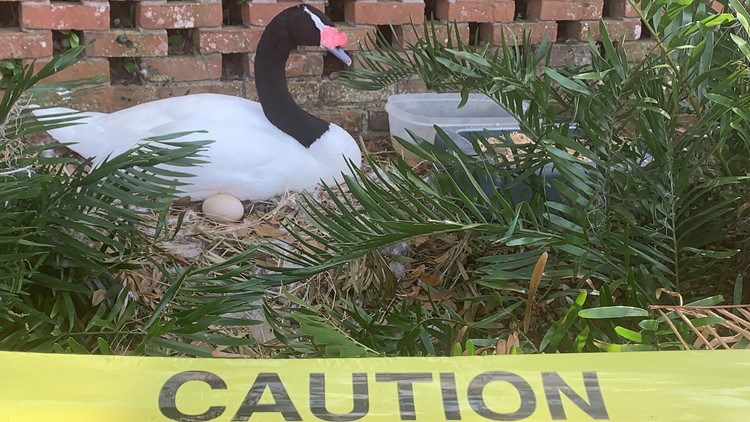 LAKELAND, Fla. — Lakeland, Fla., is home to a total of about 70 swans, which live in the Historic District near Lake Morton. But, one type of swan has almost disappeared entirely: the black-neck swan.

Within the first two weeks of March, three swans were hit by cars. All three swans died, including a black-neck swan, which is hard to come by.

There is only one black-neck swan left in the city of Lakeland -- a male. On March 7, 2020, a driver accidentally hit the only remaining female black-neck swan, leaving the mile by itself.

“Speeding was not the issue,” said Kevin Cook, Lakeland’s director of communications. “It was in her blind spot.”

About two years ago, the city’s swans had several clashes with automobiles. To limit accidents, the city lowered the speed limit along Lake Morton Drive to 20 mph, added a number of crosswalks and placed signage throughout the historic neighborhood.

“That really calmed the issue until just these last two weeks,” Cook explained.

To alleviate the new stress, the city of Lakeland is brainstorming several plans which include making crosswalks into tabletop crosswalks. Cook said the raised crosswalks will force drivers to slow down when they drive over them.

The city is also considering adding large swan insignia in the road, which will alert drivers and pedestrians to be mindful of swans in the area.

Cook said the city will go over the plans during a traffic meeting in the near future, and he hopes at least one of those ideas will come to fruition.

RELATED: Lakeland wants carousel in Munn Park where Confederate statue use to be