The Gulf of Maine and some of its beaches, ever popular with tourists, have recorded a high number of sightings of a the lion's mane jellyfish. 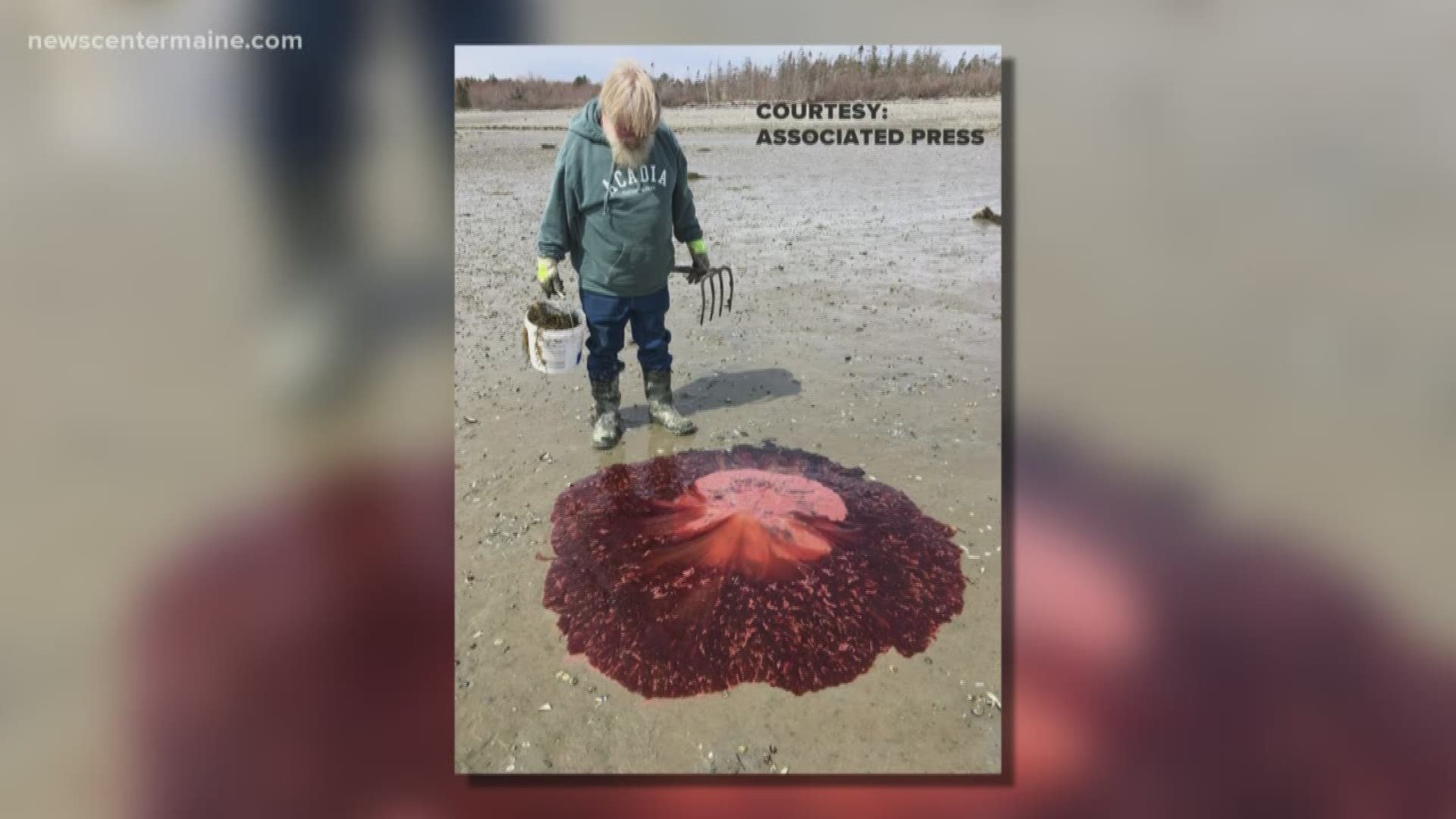 The Gulf of Maine and some of its beaches, ever popular with tourists, have recorded a high number of sightings of a big jellyfish that has the ability to sting swimmers and occasionally does.

The lion's mane jellyfish, the largest known variety, can grow to five or more feet across, with tentacles more than 100 feet long.

Such giant jellyfish are uncommon, but beachgoers say larger than average ones have been exceptionally plentiful this year in the gulf, which touches Maine, two other states and two Canadian provinces.

Becky Rice-Barnes of Mariaville and her husband Jimmy were out digging for claims at Maine's Lamoine Beach recently when they found a five-foot specimen washed ashore.

"My husband said you're not going to believe what's over here, and I didn't," Rice-Barnes said. "We've seen red jellyfish before, we've just never seen a red jellyfish that's huge."

Jellyfish are tracked each summer by Nick Record, a senior research scientist at Bigelow Laboratory for Ocean Sciences in East Boothbay, Maine. Typically fewer than half the jellyfish reported are lion's manes. This year, almost all of several hundred jellyfish observed were the lion's mane variety. The exact number of total jellyfish sightings isn't available yet, but Record said it's on pace to be in the typical range of 300 to 700.

Unlike other jellyfish common off Maine, they're not entirely translucent. In the water, they resemble a drifting fireball, and when washed on land they can collapse into a mess that resembles a bloody crime scene.

Record takes reports about jellyfish encounters via a website , the Jellyfish Reporter, that allows beachgoers and boaters to provide details about sightings. A couple of lion's manes five or six feet across, and many have been a foot and a half to two feet.

The lion's mane lives in cold waters in many parts of the world. The jellyfish uses its tentacles to capture prey, and its sting can be painful to humans, though not typically life-threatening. At least five swimmers in Maine have reported stings this year.

"Just a gigantic, scary jellyfish that you would not want to run into in the water," Record said of larger lion's manes. "It has been kind of a steady stream of them all summer."

While anecdotal reports of jellyfish, including lion's manes, are more common in recent years, it's hard to know if there really are more than usual in the Gulf of Maine because good historic date is lacking, said Andy Pershing, chief scientific officer with Gulf of Maine Research Institute.

If there are more large lion's mane jellyfish, Record said one possible reason is that the Gulf of Maine is warming faster than most of the world's oceans, and the jellyfish can grow faster in warmer water.

Record advises swimmers and others to use caution when they come upon the buoyant blobs.

"Every once in a while I get pictures of people holding a lion's mane jellyfish," he said. "Don't do that."