More than a dozen native seabirds have been found with unsettling gashes on their heads. Now, investigators want to know how it happened. 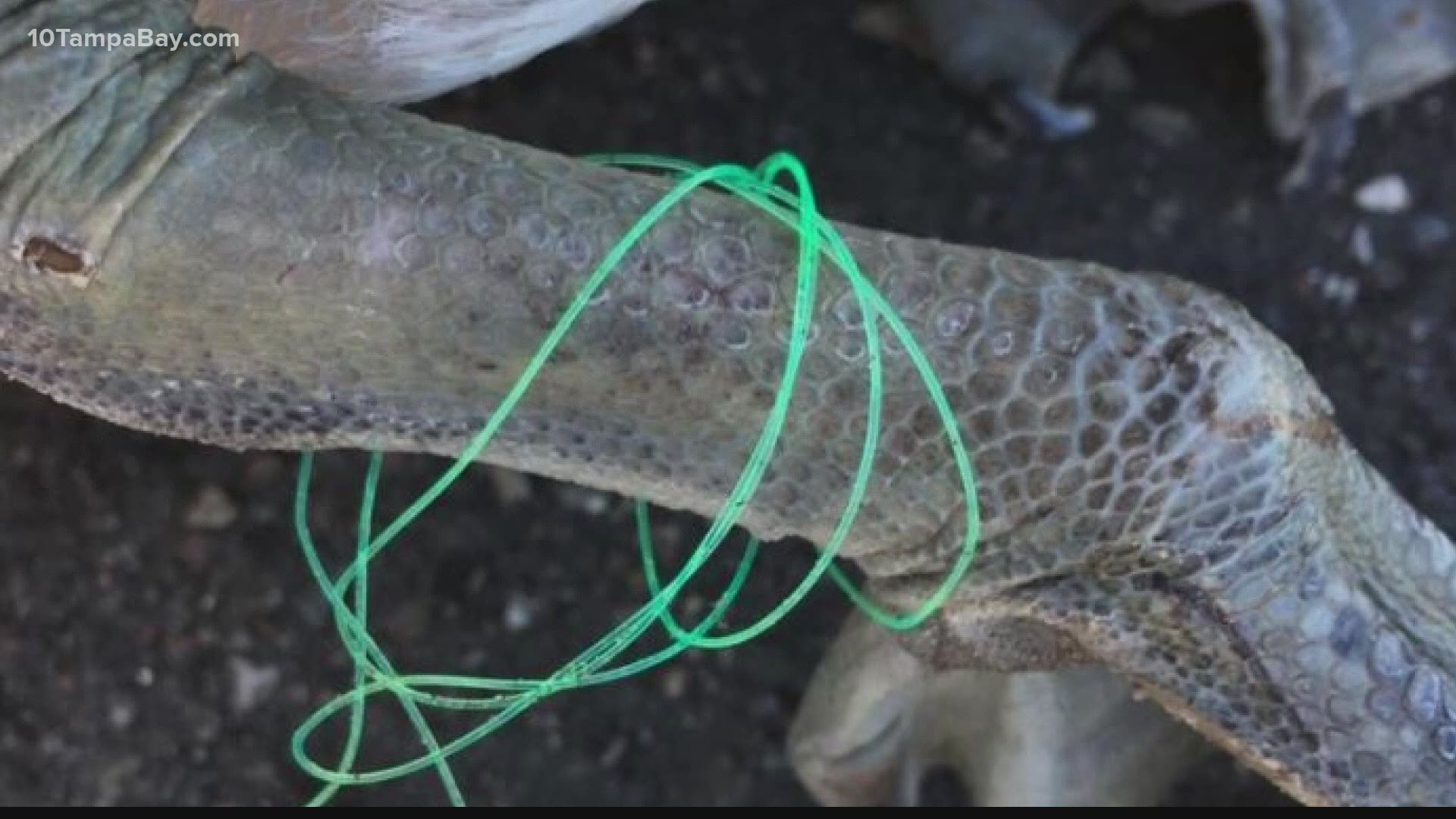 ST. PETERSBURG, Fla — The Sunshine Skyway Bridge is seeing a renewed effort to ensure the safety of a seabird that has become synonymous with the state-- the brown pelican.

Rescue groups like Friends of the Pelicans say they have seen an uptick in injuries to the species that can be found along Florida's coast.

Nearly 100 seabirds a week are being freed by rescuers from fishing line and hooks at the Skyway Fishing Pier State Park, according to the group.

But there could be something more serious occurring.

Friends of the Pelicans reports 13 of the ocean dwellers have been found scalped since Jan. 9. The group posted about its most recent discovery earlier this month, claiming the pelican was "terribly tortured."

"Someone had trimmed his flight feathers so he was unable to fly away and escape the torture," the group wrote on Facebook.

The Florida Fish and Wildlife Conservation Commission is aware of the allegations and opened a criminal investigation.

"The FWC has received reports of pelicans being intentionally injured at the Skyway Fishing Pier. FWC officers are currently investigating these reports and we encourage the public to report these violations to the FWC’s Wildlife Alert Hotline at 1-888-404-3922. Callers can remain anonymous and may be eligible for a reward," the agency said

Should it be determined that pelicans are being intentionally scalped near one of Florida's most iconic bridges, charges ranging from animal cruelty to migratory bird violations could be filed.

In the meantime, the FWC says it is increasing law enforcement patrols in the area and working to educate people fishing in the area.

"We are working hard to reduce these incidents through educating people about responsible fishing practices and what to do if they hook a bird while fishing," a spokesperson said.

Another possibility for the unsettling injuries could be that pelicans are diving too close to the rocks or bridge in an effort to get an angler's bait.

All outcomes will be a part of the FWC's investigation in the hopes of getting answers and relief as the agency says it "takes seabird conservation seriously."

But rescuers who have been helping the pelicans for years believe more action is needed.

The group hired a paid worker to rescue the animals. It was a decision that led them to soon realize the situation was far worse than initially imagined.

“It has caused an enormous amount of deaths of the local brown pelican population,” Begay added. “It is not sustainable.”

That's why Begay is pushing for the park system to close the pier at night in an effort to curb potential bad actors.

“We would also like to have the park system close the pier at night, like all the other state parks. And the fact that there’s been no ranger at night, and it’s a free-for-all. I mean there’s no oversight, anything goes at night," Begay said.

According to the Florida State Parks' website, the pier is open 24 hours a day, 365 days a year.

The situation has caught the attention of another state agency: The Florida Department of Environmental Protection.

To help address the issue the DEP says it has placed a limit of three fishing poles per person at the popular spot and increased site visits from staff. The state agency is also in the process of adding cameras, lighting, signage and upping bird-rescue staff at the Skyway Pier.

And she's right. Brown pelicans have called beaches, sandbars, mangrove islands, islets and the Florida coast home for a while now.

The native species suffered a severe decline in the 1960s-1970s due to the effect of an insecticide. Since rebounding, brown pelicans face new dangers including pollution, habitat degradation and increased predators among others.