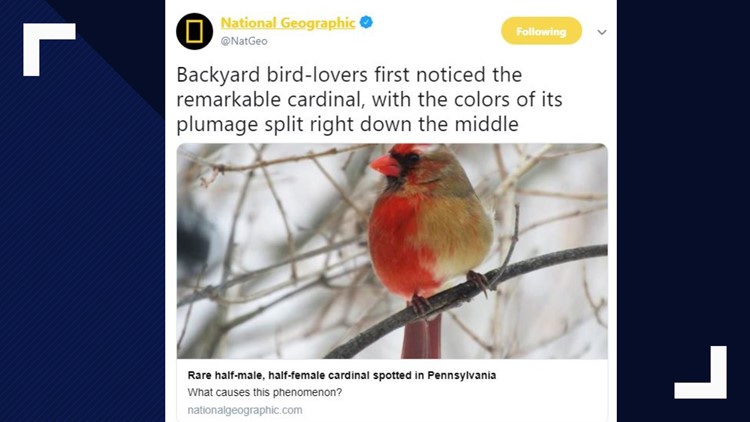 A Pennsylvania couple that has been attracting birds for a quarter century was taken by surprise when a uniquely colored bird showed up near their home.

Jeffery and Shirley Caldwell saw a cardinal that was half-vermillion and half-taupe in a redwood tree about 10 yards from their house, according to National Geographic.

National Geographic said the bird’s unique coloring is due to a condition called bilateral gynandromorph. That means half the bird’s body is male and half is female.

Gynandromorphs are rare, but not that rare, according to National Geographic.

National Geographic explained that the abnormality probably happens across all bird species, but people usually only notice in species where the adult males look very different from the females.

Postdoctoral fellow Daniel Hooper, at the Cornell Lab of Ornithology, sent an email to National Geographic to talk more about the condition.

Hooper said because male cardinals are so distinct looking with their bright red plumage, it’s easier for people to notice when they look different.

Hooper told National Geographic what makes the cardinal in the Caldwell’s neighborhood so interesting is that it could have the ability to reproduce. Most gynandromorphs are infertile.

Shirley told National Geographic that theory could be put to the test soon because the bird they have their eyes on is always in with a male.