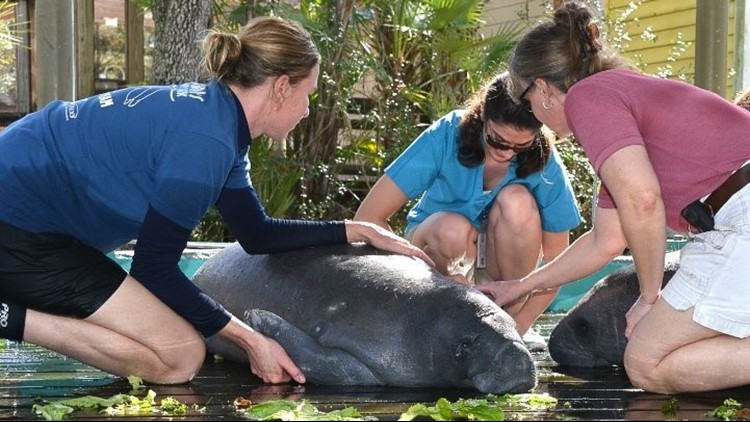 ZooTampa veterinarian accused in manatees' deaths will practice again, but not on manatees

TAMPA, Fla. -- A senior veterinarian accused of malpractice will be allowed to provide care to animals at ZooTampa at Lowry Park with the exception of manatees.

Dr. Ray Ball is expected to return to work following the death of at least two manatees after the Tampa Bay Times reported his medical practices were described as suspect at best. Allegations regarding Ball's process involved him amputating flippers of injured wild manatees and turning them loose, even with their bones exposed.

An independent, anonymous team of veterinarians team assembled to investigate Ball concluded he did not cause the manatees' deaths, according to the zoo's statement.

The zoo says the panel examined questions posed by the U.S. Fish and Wildlife Service regarding treatment of manatees and found no specific practice, including those raised in the allegations, actually killed a manatee.

"Because of the Zoo’s longstanding commitment to manatee rescue and rehabilitation and the role of our zoo to save this important Florida species, our in-depth review extended well beyond the questions raised by the U.S. Fish and Wildlife Service," it reads, in part.

"We asked for an independent assessment by a panel of experienced, licensed veterinarians, who reviewed dozens of cases as well as the manatee program’s facilities, personnel, policies, protocols, practices and the environment in which the program operates."

Ball will be evaluated "for an indefinite period" of time while treating more than 300 species of animals, the zoo says.

Manatees are protected animals at a state and federal level.

ZooTampa veterinarian accused in manatees' deaths will practice again, but not on manatees by 10News WTSP on Scribd