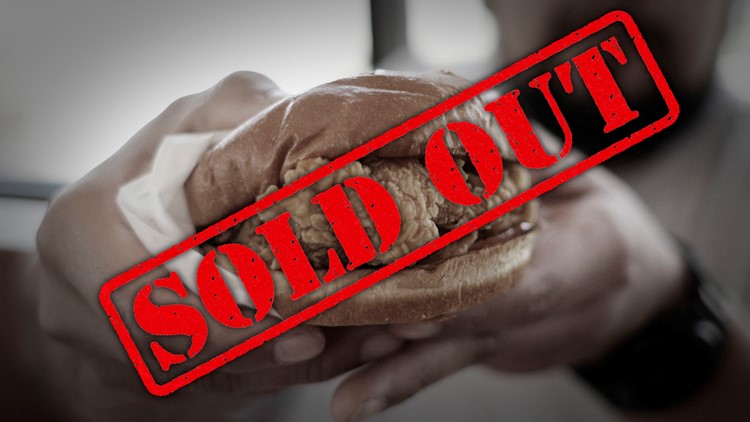 Photo by: AP/WWLTV
Randy Estrada holds up his chicken sandwiches at a Popeyes, Thursday, Aug. 22, 2019, in Kyle, Texas. After Popeyes added a crispy chicken sandwich to their fast-fast menu, the hierarchy of chicken sandwiches in America was rattled, and the supremacy of Chick-fil-A and others was threatened. It’s been a trending topic on social media, fans have weighed in with YouTube analyses and memes, and some have reported long lines just to get a taste of the new sandwich. (AP Photo/Eric Gay)

Popeyes chicken sandwich is sold out - for a while

Just a couple of weeks after beginning to sell them, the company announced that they are sold out. At least one WWL-TV staffer reported that his store of choice was out of the sandwich when he went to get one.

Business Insider and USA Today were quoting a statement from Popeyes that said that in two weeks, the company went through the number of filets it expected to use through the month of September.

Not too worry, though. While neither the company’s website nor its Twitter post explained the reason for the outage, both say the sandwiches will return 'for good.'  It can probably be assumed that Popeyes underestimated the demand for its sandwich and has had to order more breasts of chicken – likely close to twice what they had been ordering.

Reports around New Orleans were that lines regularly were out into the street at stores.

The chain began a spirited fight with Chick-Fil-A for dominance in the chicken sandwich wars when they debuted a sandwich that has some similarities to the CFA offering – pickles, boneless breast – but some variations – more breading, more spice and a spicy sauce.

The Popeyes sandwich started to receive attention nationwide – causing lines of cars at its stores, which often were out of the sandwich before the end of the operating hours.

The company is offering to inform people of the sandwich’s return via app push alert.