'It made my day': Good Samaritans help drivers stuck in massive I-84 backup

A Cascade Locks couple handed out food and water to drivers stuck on Interstate 84 in the Columbia River Gorge. 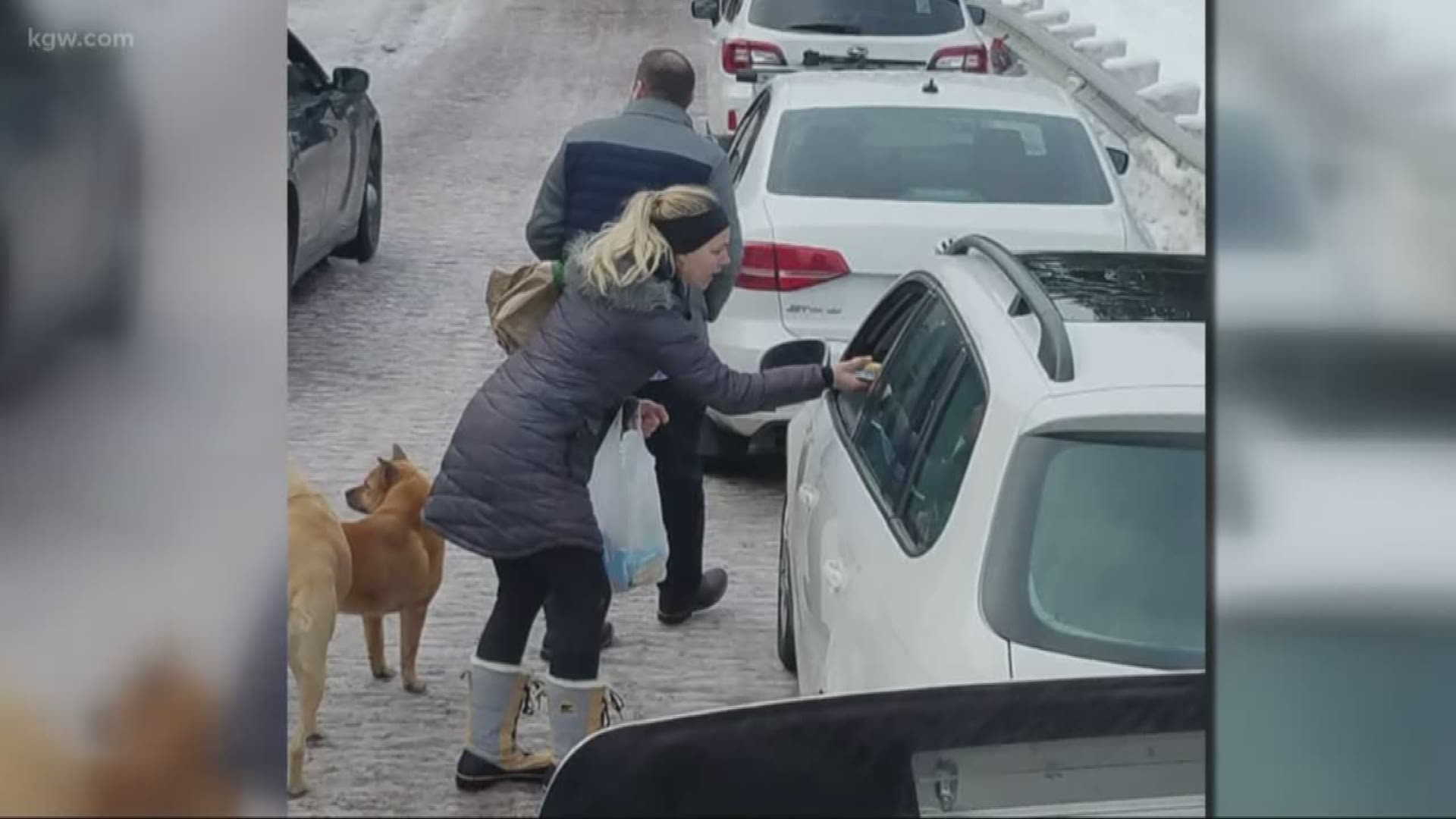 PORTLAND, Ore. — As frustrating as the mess on westbound Interstate 84 in the Columbia River Gorge was for drivers, there was some good.

People stepped up to help one another as hundreds sat trapped on the freeway. Many drivers were stuck for 15 plus hours.

“Oh gosh, I think we were there for 18 hours total,” explained Dennis Miller who is a fuel truck driver.

Miller started helping other people chain up and offered drivers gas to fill their tanks.

“It was important to me that everybody stayed warm and here I've got big fuel tanks that run my motor," Miller said. "So I wasn't in danger of running out, so yeah, just keep everybody warm and happy and make the best out of it.”

Oregon State Troopers went car to car doing the same. Troopers could not get to everyone, but said they filled up six gas tanks and handed out food and water to about 100 people.

“It was just basic humanity of saying what can we do to all pull together to help,” said Oregon State Police Lieutenant Cari Boyd.

Then there was a mystery couple.

Miller snapped photos of them handing food and water to drivers.

“Well, it made my day, it really did,” Miller said.

The biggest surprise though, the couple was not even part of the traffic jam. Miller learned they came from Cascade Locks just to help others.

"The couple came in here early yesterday morning, bought a bunch of groceries -- water and bananas -- and I asked them if they were stocking up. They said that they were going to go take it out to everybody that was stuck on the freeway," said Katie Murphy, who works at a grocery store in Cascade Locks.

The couple had just moved to Cascade Locks from Los Angeles in December. They were stuck in the gridlock Tuesday night but got around it. When they learned drivers were still trapped the next morning they stepped up to help.

RELATED: 'It was so rewarding': Cascade Locks couple commended for giving food to drivers stuck in I-84 backup

“For these guys to go out and go shopping, and it wasn't just a ten pack of granola bars, I mean they had bags,” Miller said.

Bags full of groceries that really made a difference to people who went hours without anything.

“We need more people like these young people,” Miller explained. “It was awesome. I really felt a warmth watching them do that.”

Miller posted the photos on Facebook. The post has now been shared more than 500 times. Miller did not get the names of the good Samaritans, but wants them to know just how much their gesture of kindness meant.

“I would like to find these people too and just tell them thanks from all of us that were there,” Miller said.

KGW also learned businesses in the area even stepped up to help. Oregon State Police said Hood River restaurants donated food, Safeway donated groceries, and a local fruit distributing company dropped off cases of water. All proof that the community really came together during this frustrating traffic disaster.

"That's what our county is all about. We're welcoming. We like to band together. We're really small -- we're tiny but we all come together when it matters most," said Hood River County emergency manager Barb Ayers.