The same place they turned for help navigating the state’s broken unemployment system is now helping get meals to families in need. 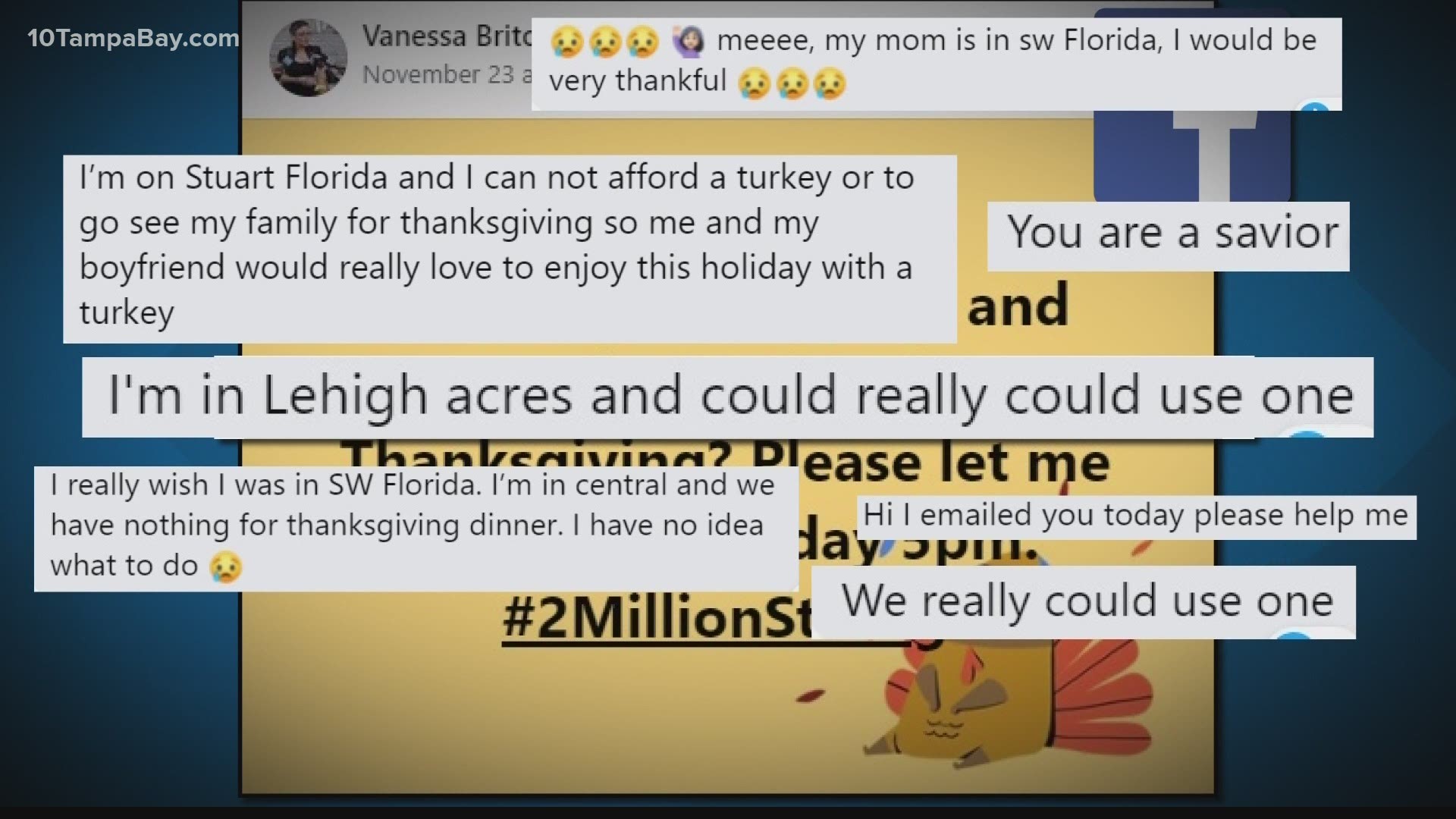 ST. PETERSBURG, Fla. — As the COVID-19 pandemic took hold in late March, putting tens of thousands of Floridians out of work, many turned to each other on social media for help.

Longtime Miami-based activist Vanessa Brito lead the charge, deciding to spend any spare time she had advocating for people who couldn't get through Florida's complex and bogged-down unemployment system.

In the process, she built up a network on Facebook, Twitter and Instagram now made up of thousands of people where they can connect with her and each other for support and help.

It started with a simple post from Brito asking if anyone needed help for the holiday.

“When I put out a message and I saw the response and the experiences that people are going through – and I deal with everybody on a daily basis – I was still shocked at how bad it really is,” Brito said.

That one post turned into a few meals paid out of her own pocket. That turned into others seeing her offer and offering to pitch in, too, with either money or food. That turned into dozens of donated turkeys and entire meals being delivered to families all over the state.

“It’s so much more than financial hardship,” Brito said. “It’s emotional and we all feed off one another.”

Now, they’re feeding each other.

Sarah Arlia woke up Wednesday fully expecting she and her 10-year-old son would be eating TV dinners for Thanksgiving. Arlia, who has been out of a job since the start of the pandemic, has struggled to find work due to her health and being considered at high-risk.

Even if he didn’t like to show it, Arlia knew her young son was upset. She was heartbroken.

But by Wednesday afternoon, an entire fully-cooked meal was delivered to her door. She says a friend who follows Brito’s page reached out on her behalf after seeing a post offering assistance.

“I was really down and I’ve never had a Thanksgiving where we didn’t have family and a big turkey dinner and so it means a lot to me to still be able to do it this year,” Arlia said.

“To have somebody do that for me, it means a lot, it changes everything.”

For Brito, who spends what little free time she has left anymore caring for her sick mother, the effort was almost instinctive.

“It’s just – to not be able to buy a slice of ham and mashed potatoes for your kids, I can’t imagine that with my parents,” Brito said through tears beginning to form in her eyes. “So I think about that and I would never wish that on anybody and it seems like the whole community is going through it.”