The act would restore the portions of the 1965 Voting Rights Act that were invalidated by the 2013 Shelby County v. Holder Supreme Court decision. 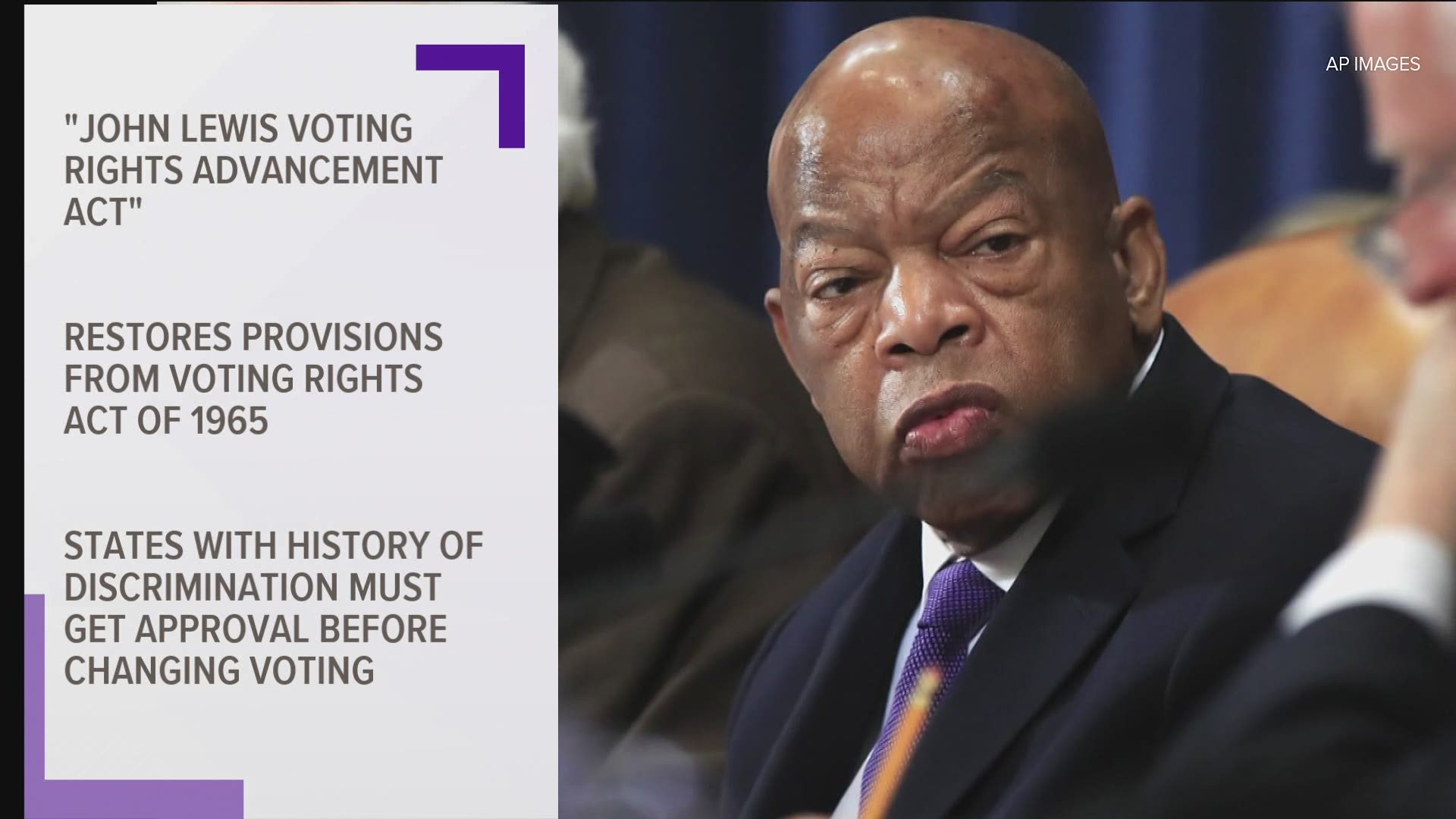 WASHINGTON — A new bill in the U.S. Senate aims to restore parts of the 1965 Voting Rights Act in honor of late U.S. Rep. John Lewis.

The act was earmarked to restore provisions of the Voting Rights Act that were struck down by the United States Supreme Court landmark decision rendered in the 2013 Shelby County v. Holder case.

In that case, one provision, Section 4 (b), was ruled unconstitutional, because, according to the high court, it exceeded the power that Congress had to enforce the 14th and 15th Amendments of the United States Constitution.

The Court also reasoned that the coverage formula conflicted with the constitutional principles of federalism and equal sovereignty of the states because the disparate treatment of the states was based on 40-year-old facts that had "no logical relationship to the present day."

The Supreme Court did not strike down Section 5, but without Section 4 (b), no jurisdiction would be subject to the provisions of Section 5 until and unless Congress were to enact a new coverage formula.

"On Friday night, my dear friend and hero, John Lewis passed away. America has lost a genuine hero – an unwavering lodestar who, over decades of selfless activism and public service, drew us closer to our ideals," Leahy said, in part, while introducing the legislation on the floor of the Senate. "John bled and his bones were broken for the cause of civil rights. He came to Congress bearing those scars – a living, breathing reminder that our society’s progress on racial equality came through the sacrifices of heroes like him. In Congress, John stood with equal moral clarity, serving as its conscience and reminding us that our work to build a genuinely equal and just society remains unfinished."

The new John Lewis Voting Rights Advancement Act addresses some of the issues discussed in the Shelby v. Holder case as well as other issues that have become evident in the intervening years.

RELATED: Stacey Abrams to testify on effect of 2013 voting ruling by Supreme Court

According to a summary document, the act "creates a new coverage formula that applies to all states and hinges on a finding of repeated voting rights violations in the preceding 25 years."

Notably, the 25-year period addressed in the new act is a rolling period, which will keep up with the most current conditions, so that only states that have a recent record of racial discrimination are covered.

States with a record of repeated and persistent violations will be covered for a period of 10 years, but if they establish a clean record moving forward, they can come out of coverage.

According to Leahy, last December, the House of Representatives passed a version of the measure. He is now urging Senate Majority Leader Mitch McConnell to permit a vote on this legislation, referring to his longtime friend and colleague, John Lewis.

"John called voting ‘the most powerful nonviolent tool we have to create a more perfect union.’  He was right.  And that’s why we cannot stand idly by while states engage in flagrant suppression schemes to take this tool away from marginalized communities," Leahy said. "Let’s do it for John. But let’s do it not simply because it’s named after him, but because it is precisely what John would do: take action to forge a more perfect union, to protect our democracy, and, above all, to do what is right.”

Congressman John Lewis to lie in state at U.S. Capitol

Brenda Wood's Last Word on Congressman John Lewis: 'We didn’t deserve him. But Lord, did we need him!'