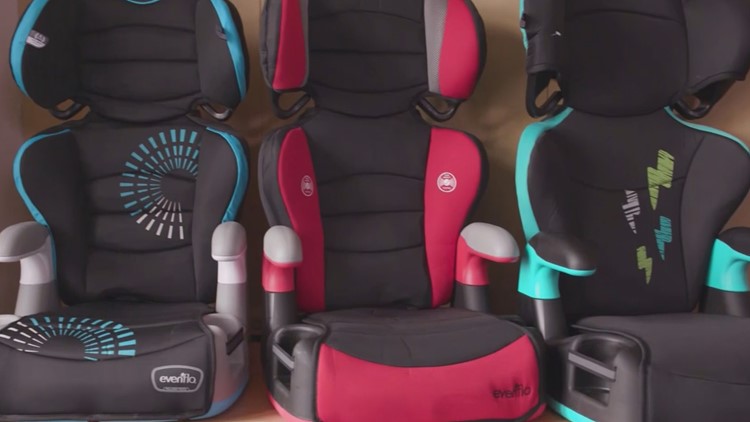 Photo by: CBS
ProPublica was able to buy a booster from Evenflo's website that was marketed for children who weigh 30 lbs. or more.

ST. PETERSBURG, Fla. — Look at this crash test, the child-sized dummy is tossed around like a rag doll. This video obtained by ProPublica is raising questions about safety claims with a popular car booster seat.

ProPublica and CBS News looked into the marketing of the Evenflo booster seat. They found the seat with a full harness performed better than the booster seat, which has only a shoulder restraint -- and the test dummy slipped out of it.

The Academy of Pediatrics recommends kids remain in a car seat with harness restraints for as long as possible until they're at least 40 pounds. That matches Canadian regulations. Until 2007, Evenflo marketed the big kid booster as safe for kids as young as one, as long as they weighed 30 pounds or more.

A Long Island couple, Jay and Lindsay Brown, is suing Evenflo after a crash involving their two daughters Jillian and Samantha. According to CBS News, Jillian weighed 37 pounds, and she was strapped into an Evenflo big kid booster seat farthest from the impact.

CBS News reports she was left paralyzed from the neck down, and needs a ventilator to survive.

Samantha was in a different car seat, and she fully recovered.

According to CBS News, Evenflo changed the height and weight requirements in the owner’s manual just months before that crash but didn't notify parents who were already using the seats.

And Evenflo continues to market the the 30 pound requirement on the label, according to ProPublica.

“I would never have bought that if I known I would've left them in the front facing five point harness for years.” Jay Brown told CBS News.

“You know, you read it and you believe it.”

CBS News reports the company told the Brown family that the booster seat performed as designed.

Evenflo told CBS News it provides safe, effective, and affordable products and says it complies with all federal regulations -- which do allow boosters to be sold for kids weighing 30 pounds and up.

You can see that full CBS investigation here.