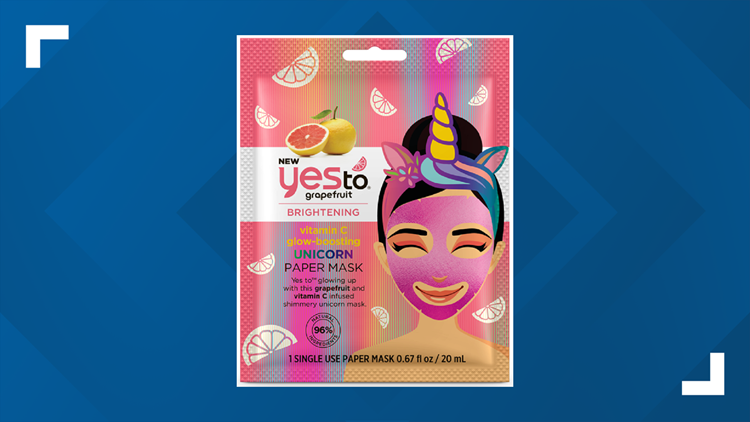 Yes To grapefruit mask promised a glow up. Instead, some customers complained of severe burns

Instead, some users reported red, itchy, burning irritations all over their faces.

Following reports of several customers complaining of severe skin irritation, skincare company Yes To said it will remove one of its masks from stores.

Leisa Covelli of Maitland, Florida, told the "Today" show her 11-year-old daughter had something more than just an allergic reaction after she applied the Yes To Grapefruit Vitamin C Glow-Boosting Unicorn Paper Mask.

"The burn reaction was an outline of the whole mask," Coveilli said. "It was crazy, like, you can see where she pressed on it into her face."

Some of the redness reportedly went away after about an hour.

Another mom, Donna Baines of New Jersey, spoke with BuzzFeed News and explained it didn't take long before her 15-year-old daughter broke out in irritation after applying the mask. It was a Christmas gift from her father.

"She put it on for 15 minutes, and when she took it off, her face looked like it was sunburned and was very itchy," she said.

The company on its website advises customers to return the grapefruit mask, citing reports of skin irritation, to the retailer where purchased. It made an apology on Facebook, asking people to reach out if there have been "any issues" with the product.

BuzzFeed News reports, however, another teen suffered a burn after using another mask, the Yes To Tomatoes Detoxifying Charcoal Paper Mask. Her mother said the redness on her face appeared in the pattern of the mask.

Dr. Adam Friedman, the interim chair of the dermatology department at George Washington University School of Medicine and Health Sciences, told "Today" that Vitamin C could be damaging to younger skin -- and there's no clear indication of how much of the ingredient are in the product.

People also should be mindful of some of the unidentified ingredients listed on products, such as "fragrance," given the potential of allergic reactions, he said.

"Some of the things that are included as fragrances actually have other activities like preservative activity or they may have coloring in them."