Community advocates believe a life-threatening assault on a 17-year-old was motivated by racism and hate, but prosecutors disagree. 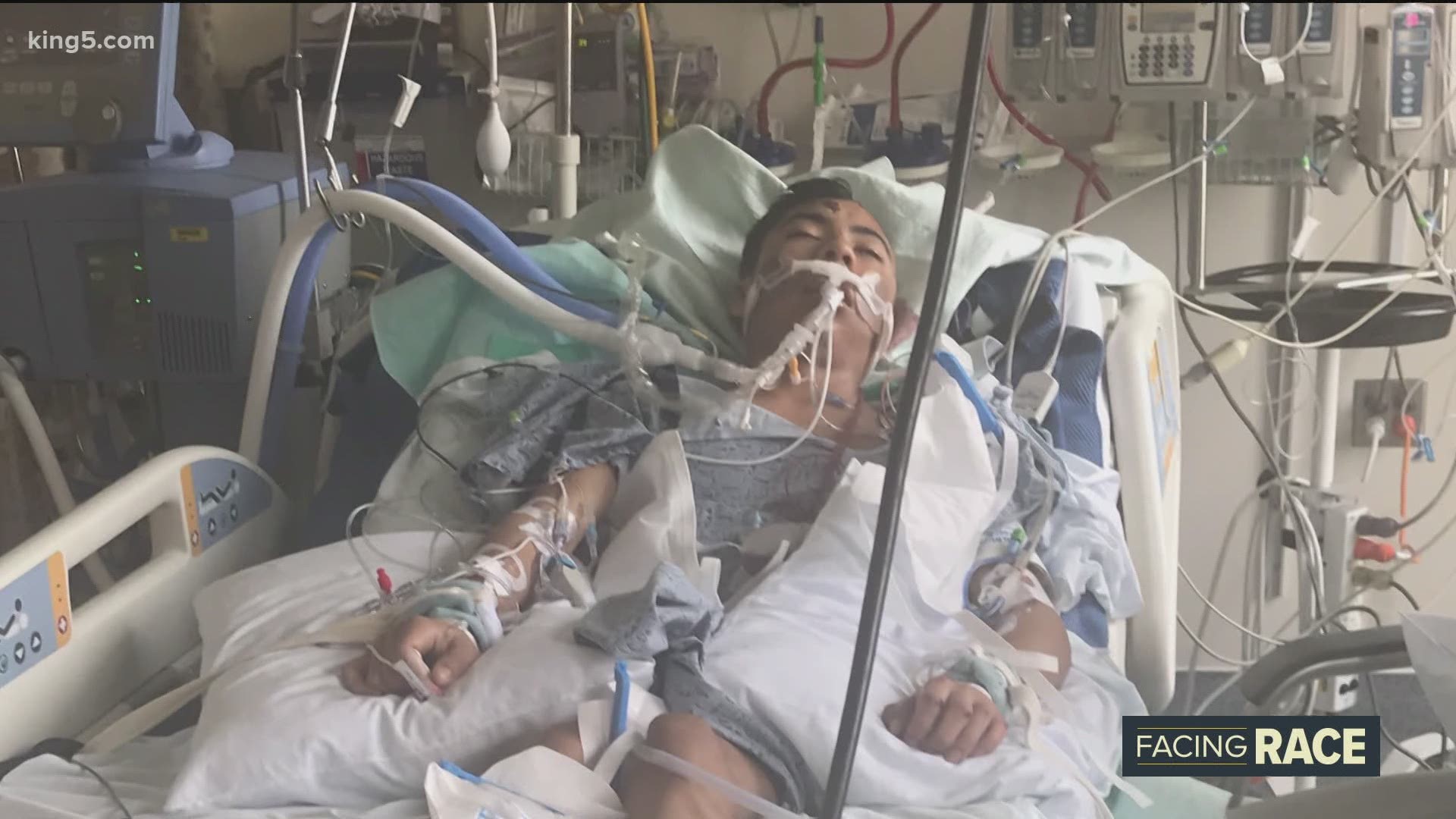 BURLINGTON, Wash. — The decision to not charge a Burlington 19-year-old with a hate crime after he allegedly brutally beat a Hispanic teenager in March has sparked outrage in the Skagit County community.

During the assault, which was videotaped by the attacker on a cell phone and posted on social media via Snapchat, 17-year-old Joel Salgado of Burlington was repeatedly called the n-word, and a homophobic slur was written across his forehead while he laid unconscious on a concrete patio, according to police records.

The accused, who is out on bail, is white.

Last year the Washington state Legislature passed the state’s first-ever hate crime bill. The law calls for a person to be guilty of a hate crime if the commission of certain offenses was motivated by the perception of the victim’s “race, color, religion…. sexual orientation…or disability.” Before this change, these crimes were labeled “malicious harassment.”

The bill’s sponsor, Rep. Javier Valdez, D-Seattle, said it’s important to call these crimes exactly what they are – manifestations of hate – to better hold people accountable and to track trends of crimes based on bias, such as racism.

“I think anytime we can highlight in our state that someone is being attacked or being harmed because of their race, their religion, gender, sexual orientation, the public needs to know that," Valdez said. "And we need to know what our true number (of hate crimes) are so we can ensure we’re helping our prosecutors and law enforcement.”

According to a review of police records obtained by KING 5, Salgado, who is now 18, was beaten and nearly died of his injuries on March 21. The Skagit County Prosecutor charged a high school acquaintance of his, 19-year-old Trevor McCabe, with two counts of assault, first degree robbery and tampering with a witness in connection with the case.

Salgado was airlifted to Harborview Medical Center in Seattle unable to speak or breathe on his own. He suffered significant skull fractures and internal bleeding, according to legal documents. The Harborview team told police his outcome “did not look good.”

In an emergency surgery, doctors removed a portion of Salgado's brain.

“It is painful, so painful to see your son like that lying in a bed," said Salgado’s mother, Rocio Linares. "It’s something that I wouldn’t wish on any mother, let alone a child. Afterward, he didn’t even know or remember that I was his mother. It was difficult. It is difficult."

Community leaders, including Rep. Debra Lekanoff, D-Samish Island, attended protests in front of the Skagit County Courthouse over the spring and summer – angered that prosecutors failed to add a hate crime enhancement.

Police obtained five videos of the assault, including audio of Salgado receiving taunts and racial slurs. Legal records and a review of the videos by KING 5 detail a vicious attack. While Salgado lay on the ground having a seizure caused by blows to the head, according to medical professionals, the attacker continued to beat the teen by kicking him in the lower back. Salgado was seen going unconscious as the attacker slapped him in the face, threw water from a dog bowl on him and kept up the taunts. In one video clip a loaded pistol grip shotgun was pointed at Salgado’s car that he managed to stumble into after the beating.

“Standing next to Joel (during a protest) and hearing his story (led me to ask), ‘Why didn’t we have a hate crime law 20 years ago?’” said Lekanoff. “How many other victims have faced what Joel faced? The reality of what people of color are facing needs to be addressed here in the Skagit.”

According to police, the evening of March 21 began with Salgado reaching out to McCabe on social media to ask if he could buy alcohol. According to police records, McCabe encouraged Salgado to come to his house with cash. Instead of exchanging money for booze, police said McCabe had a premeditated plan to beat him up.

Skagit County Deputy Prosecutor Brandon Platter filed a notice of his intention to seek an extraordinary sentence if McCabe is found guilty due to his “deliberate cruelty” and “egregious lack of remorse.”

But the prosecutor’s office said they did not file a hate crime charge because they couldn’t prove that motivation behind the offense. A KING 5 review of police records obtained through a request for public records shows that police believe it was anger and jealousy over a girl, not racism, that prompted the assault.

“The Skagit County Prosecutor’s Office condemns racism, prejudice and discrimination in any form. Hate crimes hurt not just the victims, but the entire community as a whole….We aggressively pursue all serious crimes and work to hold people accountable,” wrote Skagit County Prosecuting Attorney Rich Weyrich in an email.

KING 5 found that the FBI consulted on the case as well and agreed that the crime was a result of jealousy and anger.

“If the evidence does not show the motivation was the person’s race or other protected status, then the crime does not fall under the hate crime statute and the Skagit County Prosecutor’s Office cannot file the charge. In any case where the hate crime charge can be proven beyond a reasonable doubt, the Prosecutor’s Office will fully prosecute the crime,” Weyrich wrote.

Some community advocates are still unsatisfied with the response to this crime by the criminal justice system. Leaders from the Anti-Defamation League of the Pacific Northwest and the Latino Civic Alliance said they reached out to the prosecutor’s office to discuss the community’s concerns but never got a response.

The chair of the Board of the Latino Civic Alliance said the lack of dialogue was a lost opportunity to help the community build trust and understanding, especially for Latinos who are experiencing anti-immigrant sentiment.

“A lack of transparency, a lack of communication just validates that there’s something wrong with this system,” said Nina Martinez, board chair of the Latino Civic Alliance. “This is real dialogue that needs to happen, and a real appreciation for different cultures in the community, and it has to be done. That’s the only way to build trust.”

“The Latino community has a huge problem with underreporting of hate crimes,” said Miri Cypers, regional director of the Anti-Defamation League’s Pacific Northwest office. “The community wants to hear why the prosecutor’s office made the decision. That’s why it’s important to have open lines of communication because (when that doesn’t happen) people feel reluctant to come forward when issues happen in the future.”

“It’s alarming. That’s not the state I was born and raised in,” Valdez said. “So it was time to take some action on it.”

After two major brain surgeries and weeks in the hospital, Salgado survived. He graduated from high school wearing a helmet to protect his brain. He’s relearned to talk, walk and read but still struggles with chronic pain, balance and cognition.

“I don’t really remember anything (about the assault),” Salgado said. “It just happened out of nowhere. I really can’t believe it happened to me.”

There's a difficult journey of healing in front of Salgado and his family. But his mother said finding justice for her son will make the path easier.

“The community is angry," Linares said. "I am very appreciative for their support, their prayers and protests, but I have to see this situation from the eyes of the mother of the victim. The only thing I want is justice for my child. He is my only son and he is everything to me.”

McCabe’s attorney said they have no comment. His trial is scheduled for December 2021.

This story was produced as part of “Facing Race,” a KING 5 series that examines racism, social justice and racial inequality in the Pacific Northwest. Tune in to KING 5 on Sundays at 9:30 p.m. to watch live and catch up on our coverage here.