The post caught the eye of Service Solutions Plumbing in Sheridan, who drove out to Cabot to fix the leak. 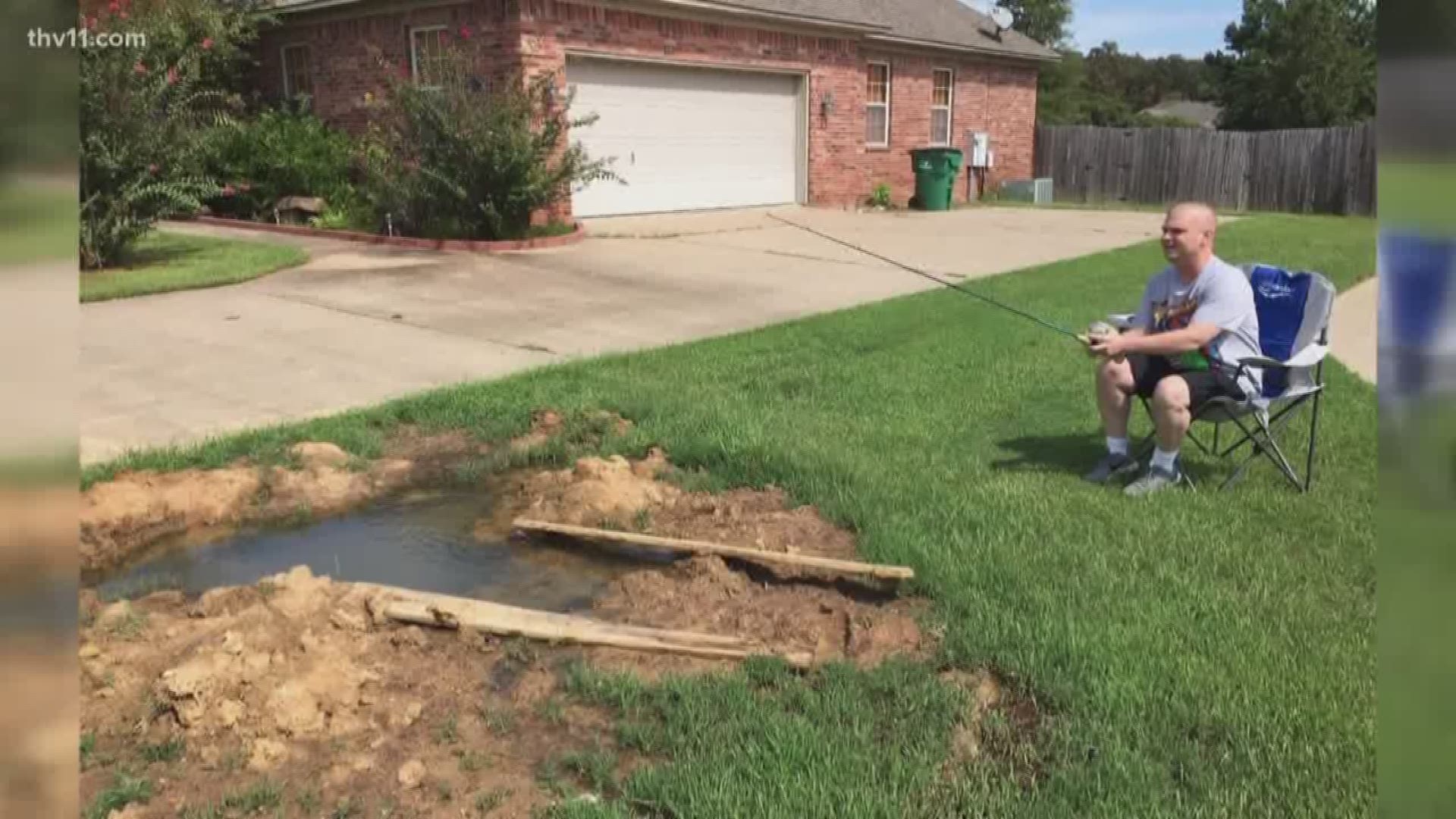 CABOT, Ark. — A Cabot man was fed up with a big hole dug in his yard several weeks ago, so he made a humorous post about it on social media. Now, it’s gone viral.

"This is a pretty nice neighborhood and staring at a hole like that isn't something anyone would want to do,” said Scott Romine.

On Monday, Romine couldn’t stand to look at his well-groomed yard dug up any longer, after he said his neighbor tried unsuccessfully to repair a leak.

"I try to look for the humor in everything when I can,” said Romine. “Especially with this situation, when most people wouldn’t take it as lightly as I have.”

Instead of taking the matter to local court to get the hole fixed, Romine went on Facebook and poked fun at the situation in hopes of getting someone’s attention.

He posted photo-shopped pictures of the hole and referred to it as "Lake Romine," a place you can fish; calling his garage the bait shop, and saying the lake is filled with all sorts of fish.

Romine even added photo-shopped pictures of a water park splashing its way into the hole.

He made the post Monday night, and by Wednesday, it had gotten more than 10,000 likes.

"I thought it was too far when he did the photoshops and stuff,” said Scott Shelby, the man behind the hole.

Shelby, Romine's neighbor, didn't find the post funny at first, until he saw the right person caught its attention--a total stranger, a plumber from Sheridan.

"I get here, I learn his story, he's an ex-service member,” said David Barnard, owner of Service Solutions Plumbing. "We are also a disabled vet-owned company. My son is coming home from a tour soon, so this hit close to home."

Service Solutions Plumbing learned Shelby is a disabled veteran and low on income and had trouble repairing the water line.

So, the company donated its time and drove out to Cabot to fix the leak.

"If it hadn't of been for my neighbor here, Mr. Scott, posting about it on Facebook, we wouldn't be here," Shelby said.

Romine wants people to know, especially his neighbor, the post wasn't intended to be mean-spirited.

“Look at the positive outcome we've had. All of this is because Facebook and good people,” said Romine.

Barnard said once the sun comes out and dries up the soupy hole, Shelby will easily be able to fill the hole back up with dirt.