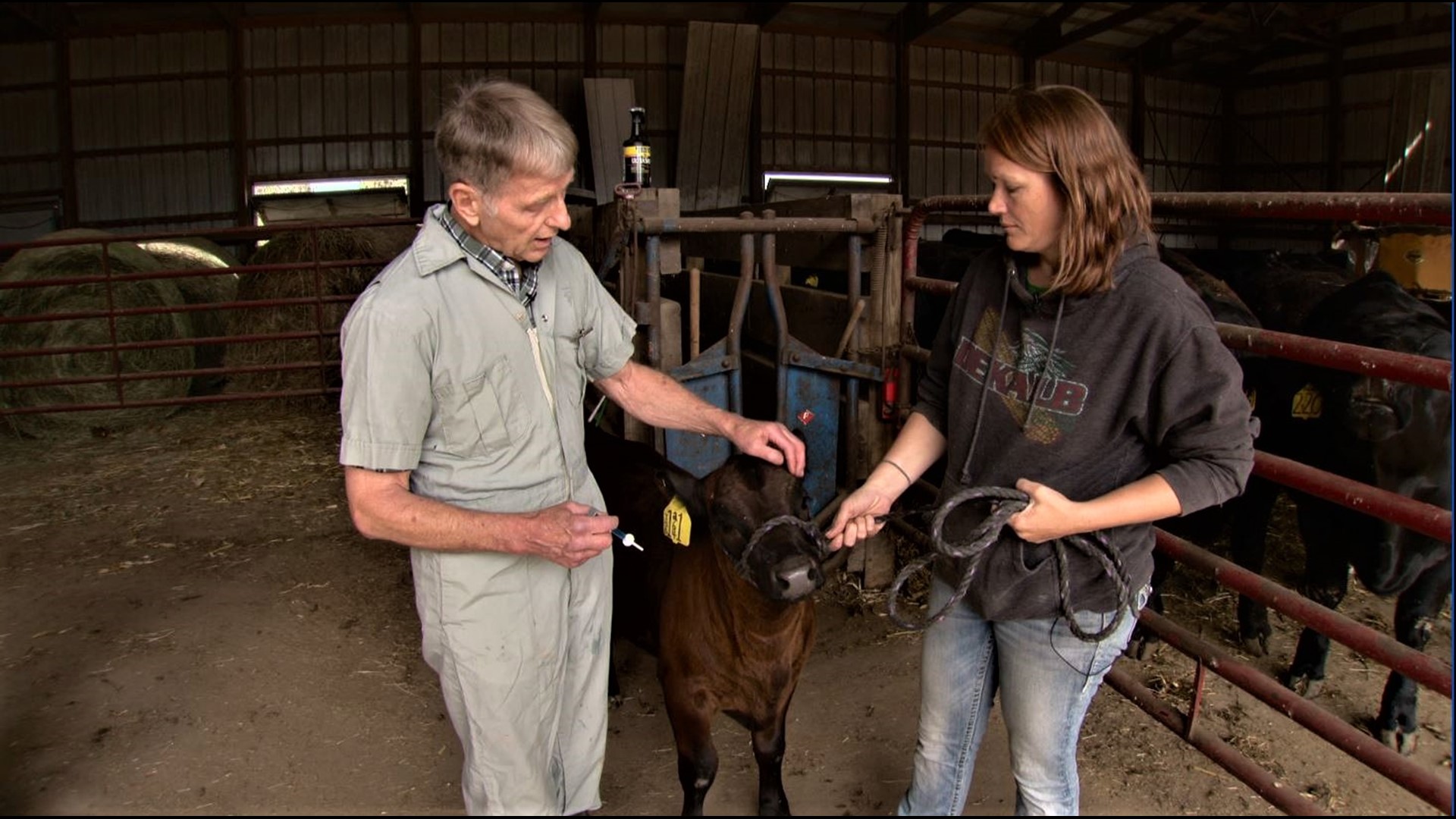 FARIBAULT COUNTY, Minn. — Faribault County, Minnesota is made up of 220 square miles, 14,000 people - and one veterinarian.

“I'm it, yep,” Dr. Robert Bogan says from behind the wheel of his 11-year-old Ford pickup.

“I bought it to be the last truck I was going to drive,” Bogan says. “As you can see, I'm still driving it.”

Like the truck, Bogan, at 74, is still rolling into farm driveways long past his plans.

But now, as Bogan and community leaders have struggled to find a new vet, Bogan has sweetened the pot.

He's is offering to give his practice away to a young replacement – clinic, equipment, furniture, and his pickup.

Even Annie, the vet clinic cat, is part of the gift aimed at luring a new vet to Faribault County.

“I've never ever heard of somebody doing what Dr. Bogan is doing,” Mary Kennedy, city administrator for Blue Earth, the county seat, says. “People don't give their businesses away.”

Most people don’t, but Bogan stands ready to sign over the deed to his Blue Earth clinic and everything inside but the pharmaceuticals.

Rosenau has been part of a group that’s worked for years to lure a new vet to the county.

Their efforts helped get Faribault County into a federal program that could forgive, for their next vet, up to a $150,000 in college debt for a six-year commitment.

“It's been very difficult, a lot harder than we thought,” he says.

The problem is not unique to Faribault County. Wide swaths of rural America have struggled to find veterinarians as vet school graduates are lured to more lucrative urban and suburban clinics, where shifts are regular and midnight telephone calls rare.

“We found out most of the students don't want to have any on-call (shifts), they don't want to do large animal, a lot of them don't even want to own their own business,” Rosenau says.

Yet, success is essential to Faribault County farmers like Lynn and Mike Findley.

On a recent visit, Bogan administered the necessary shots for one of the Findley’s calves to be shown at the county fair.

He also performed pregnancy checks on two of the Findley’s beef cows.

Lynn Findley says it’s the urgent calls – like a cow in distress during calving – that most concern the county’s farmers should Bogan retire without a replacement.

Bogan is hoping his offer will prevent that from happening.

“If we can get somebody to come in here and take over the practice, I would say it's worth it to me,” Bogan says.

And now, after five years of searching, Fairbault County has a glimmer of hope.

“I knew I wanted to go to vet school, but never did I think - this much love by a community,” Becker says. “I literally feel like, why me?”

On the plus side, Becker grew up on a hog farm 20 miles from Dr. Bogan’s clinic.  He knows the area and understands the demands of the job.

But Becker has three more years of vet school to complete, at which time Bogan would be 77.

Bogan says he’s willing to wait, “If my health holds up.”

“He does the right thing,” Evans says.

Evans says she’s among the people in Faribault County who’ve been praying for a new veterinarian.

She believes Bogan’s offer has given the effort a boost.