Travis McMichael, his father Gregory McMichael and William "Roddy" Bryan, who recorded the video, are all charged with murder in Arbery's death. 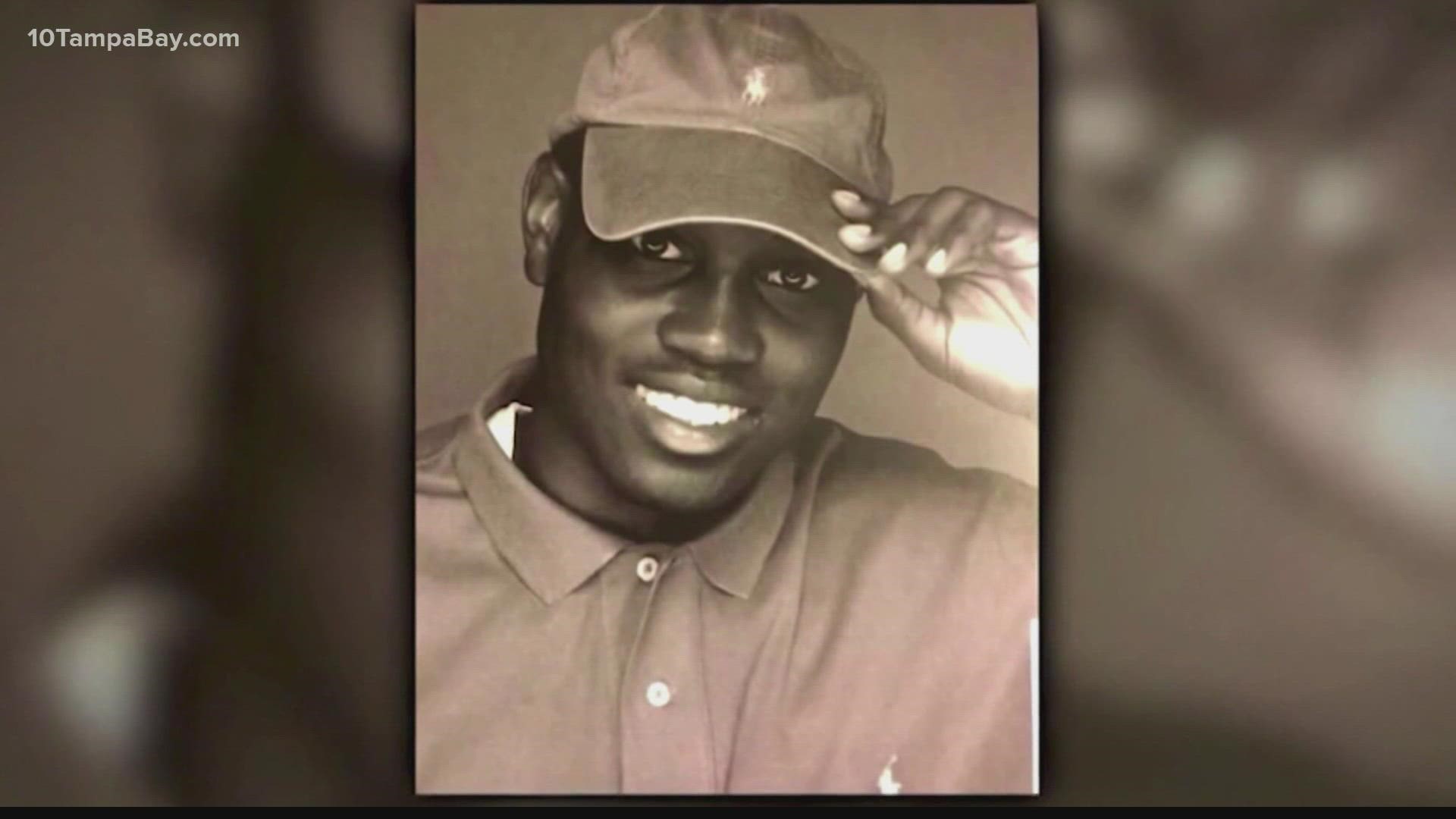 BRUNSWICK, Ga. — **WARNING: Videos contained in this article may be disturbing to some.

The trial in the death of Ahmaud Arbery continues Monday morning in Brunswick after the jury watched graphic videos surrounding Arbery's last moments on the first day of testimony Friday.

A jury was chosen Wednesday, but not without controversy. Eleven of the 12 jurors are white, and just one member is Black. That's 92 percent of the jury, far more than the population of Glynn County, which is 62 percent white and 26 percent Black.

Arbery was shot and killed on Feb. 23, 2020. Cellphone video leaked to the public shows two armed white men in a truck approaching the 25-year-old Black man as he runs down the road. One of the men, later identified as Travis McMichael, and Arbery struggle over McMichael's shotgun before Arbery is shot and collapses.

Travis McMichael, his father Gregory McMichael and William "Roddy" Bryan, who recorded the video, are all charged with murder in Arbery's death.

RELATED: Opening statements conclude, witness testimony begins in death of Ahmaud Arbery trial, here's what you need to know about what occurred Friday

The time stamps below are approximations.

"It sounded like a hunt.": #AhmaudArbery's aunt describes what she says she heard in the video of the shooting taken by William Roddie Bryan. Before the shooting, you can hear rustling in the car, what sounds like revving of engine @FCN2go pic.twitter.com/lKjyC1Ca81

not sure why the audio isn't working on this file. It's mostly police radio chatter, except when Greg McMichael tells the officer "He had no choice" and when he tells Travis "You had no choice" @FCN2go #AhmaudArbery

12:13 p.m.: The state is now showing video of the shooting taken by Bryan. Unlike Friday when there were technical issues, the video includes audio and three shotgun blasts can be heard.

State now showing video of shooting taken by Bryan. Today, unlike Friday when there were tech issues, there's audio with the video and you can hear three shotgun blasts.

12:07 p.m.: On the day of the shooting, Minshew says, Bryan told him Arbery looked tired and stopped at one point to catch his breath. "It was almost like the Black guy was tired of running," Bryan told Minshew that day.

11:59 a.m.: Minshew says Bryan told him he was working on his porch when he saw a Black man run by and a white truck following him. Bryan said he didn't recognize the "Black guy" or the men in the truck, Minshew says.

11:57 a.m.: The jury and witness are brought back in. Minshew says he spoke with Bryan at the scene, asking him "You're a passerby?" Bryan said "Not necessarily," then told Minshew what happened and that he was involved in the chase.

11:43 a.m.: The judge reprimands defense attorneys Rubin and Sheffield for "throwing shots" at the other side. He says he has mentioned this before and says they are all professionals in this courtroom. The judge says he wants to hear from one attorney per issue per witness, not each legal team, since the defense has a separate set of attorneys for each defendant.

11:41 a.m.: The judge excuses the jury while defense and prosecution argue over playing body camera footage.

11:39 a.m.: Arbery's mother, Wanda Cooper-Jones, says to the person next to her during Minshew's testimony "He didn't even go over to help." When body camera video is admitted into evidence, Cooper-Jones leaves the courtroom. The prosecution says body camera footage won't be played, but it is in the record so that Minshew can testify about it.

11:26 a.m.: When asked why he didn't attempt CPR, Minshew says he was the only officer on scene, didn't have other officer to watch the scene or watch his back, didn't know the circumstances of scene and didn't have proper equipment to tend to Arbery. He says he couldn't "switch to medical" and watch the scene.

11:19 a.m.: Minshew says he dispatched emergency medical personnel to the scene when he saw Arbery's body in the road. He says he also focused on making sure there were no immediate threats on the scene and preserving the scene's integrity.

11:05 a.m.: The state begins questioning its third witness, Officer R. Minshew, the first to respond to the shooting.

10:54 a.m.: Ramos answers yes when the defense asks if she noticed whether Travis McMichael was in a "distraught state" after the shooting. She also says yes when asked if he said he was not OK when she asked. Ramos says she came across Travis McMichael again the day after the shooting when she was canvassing the area for witnesses. She says he was still in a distraught state.

10:41 a.m.: Outside the courtroom, Arbery's Aunt Diane hugs a woman who speaks in support of the Arbery family, saying things would be different if it were three Black men in pickup trucks chasing a white man instead of the three white defendants and a Black man.

Back outside: #AhmaudArbery’s aunt Diane hugs a woman who just spoke in support of the Arbery family, saying things would be different if it were 3 Black men in pickup trucks chasing a white man instead of the 3 white defendants and a #Black man. @FCN2go pic.twitter.com/IBUuo4vn67

10:20 a.m.: Several jurors "squirm in their seats" as the first few photos of Arbery are shown. Arbery's mother, Wanda Cooper-Jones, "exhales quietly" as Ramos describes the photos showing gunshot wounds to Arbery's chest and wrist. Ramos says one of the bullets went through the window of a nearby house and stopped in the living room wall.

9:26 a.m.: Marcus Arbery Sr. leaves the courtroom as prosecutors question Ramos due to the possibility of graphic crime scene photos and videos.

The first witness of the day is on the stand, Glynn County Police Department Investigator Sheila Ramos.

9:08 a.m.: Wife of Gregory McMichael and mother of Travis McMichael, Leigh McMichael, was waiting outside the courtroom for it to open. She is in the courtroom with her lawyer. Arbery's father, Marcus Arbery Sr., enters in Barbara Arnwine of the Transformative Justice Coalition. They are seated in the last row of the public gallery.

5:26 p.m.: Officer William Duggan said he determined there was nothing he could do to resuscitate Ahmaud Arbery. Defense attorney notes Duggan described Travis McMichael in his report as "very upset"

5:12 p.m.: State prosecutors chose to start their case with bodycam footage from the 2nd officer on scene.

3:55 p.m.: State called its first witness, GCPD Officer William Duggan, whose bodycam will be shown to jurors. Duggan was the second officer on the scene as Abery's body lay in the street. *See Duggan's raw bodycam footage below

1:52 p.m.: Rubin said the video of the incident "doesn't even begin to tell the story," says it began months before in 2019 when Arbery is seen on camera in English's home under construction. Rubin shows jury stills from surveillance videos

1:50 p.m.: Rubin describes Travis as single, with a young son, formerly in Coast Guard, said he lived with his mother, father, sister and son at the time. Describes Satilla Shores as "quiet, scenic, middle-class neighborhood" said it was a neighborhood on edge due to property crimes

1:24 p.m: Technical issues with the audio of the court.

12:12 p.m.: Since those issues took so long, judge breaking for lunch now before hearing Travis' attorneys opening statement. Back at 1:10.

12 p.m.: Judge does not grant mistrial

11:57 a.m. Defense attorney Laura Hogue complains that Prosecutor Dunikoski raised the issue that the “investigation stalled.” She says the issue of the time-lapse between killing and arrest is a problem for the defendants.

Gough wants to “go ahead and move for a mistrial.”

11:46 a.m.: Back from break. Travis McMichael's attorneys said their opening statements will take 45 min. Then, judge says, will break for lunch.

11:14 a.m.: "Ahmaud Arbery had nothing on him," says prosecutor. "No backpack. No bag. No cellphone. No ID, no wallet, no keys, no gun, no weapon. Mr. Arbery couldn’t have called for help even if he wanted to."

10:57 a.m.: Wanda Cooper Jones cries out as the cell phone video plays, is weeping quietly in the back of the courtroom

10:53 a.m.: (VIA POOL) Marcus Arbery leaves the courtroom and mumbles "I don't want to see this." He walked out of the courtroom. Wanda Cooper-Jones is still seated in the with her attorney.

WATCH: Video shows moments before Ahmaud Arbery was gunned down in Georgia

10:42: State says Gregory McMichael “driveway decision number one” deciding to run inside get his gun and Travis after seeing Arbery running down street. State says Greg didn’t know he was inside the home that day when he and Travis got into truck to follow him

10:41 a.m.: State shows video of William Roddie Bryan jump into his truck to join the chase of Ahmaud Arbery.

10:36 a.m.: Prosecutor says Greg McMichael assumed the worst with no immediate knowledge. He told police, “I thought, you know, he’s running from somebody, he’s just done something, you know, he might have hurt somebody or whatever”

10: 04 a.m.: Prosecutor skips over the part where they usually tell jurors what happened. Jumps right into: this is the house under construction, this is the home in relation to the homicide location.

9:53 a.m.: State starts opening statement. Lead prosecutor Linda Dunikowski: "A wise person once said don't assume the worst in someone's intentions." Judge has said this a few times during jury selection. Dunikowski says defendants did assume worst and made decision based on assumptions.

9:37 a.m.: Jurors are sworn in and are being given instructions. Wanda-Cooper Jones and her attorney walked into the courtroom. Marcus Arbery also just walked in.

9:30 a.m.: Judge just swore in jury and read out all the charges against the three defendants. Explains that defendants have pleaded not guilty to charges.

9:25 a.m.: Judge says he will not allow the fact #AhmaudArbery was on probation to be introduced into evidence, but will allow photographs that show vanity plate on Travis McMichaels' truck which featured the Confederate flag

8:44 a.m.: Attorneys are discussing the shields between where the jury will sit – they resemble cubicle walls.