Dona Sue Bissey, 52, of Bloomfield, was sentenced to jail time and community service. 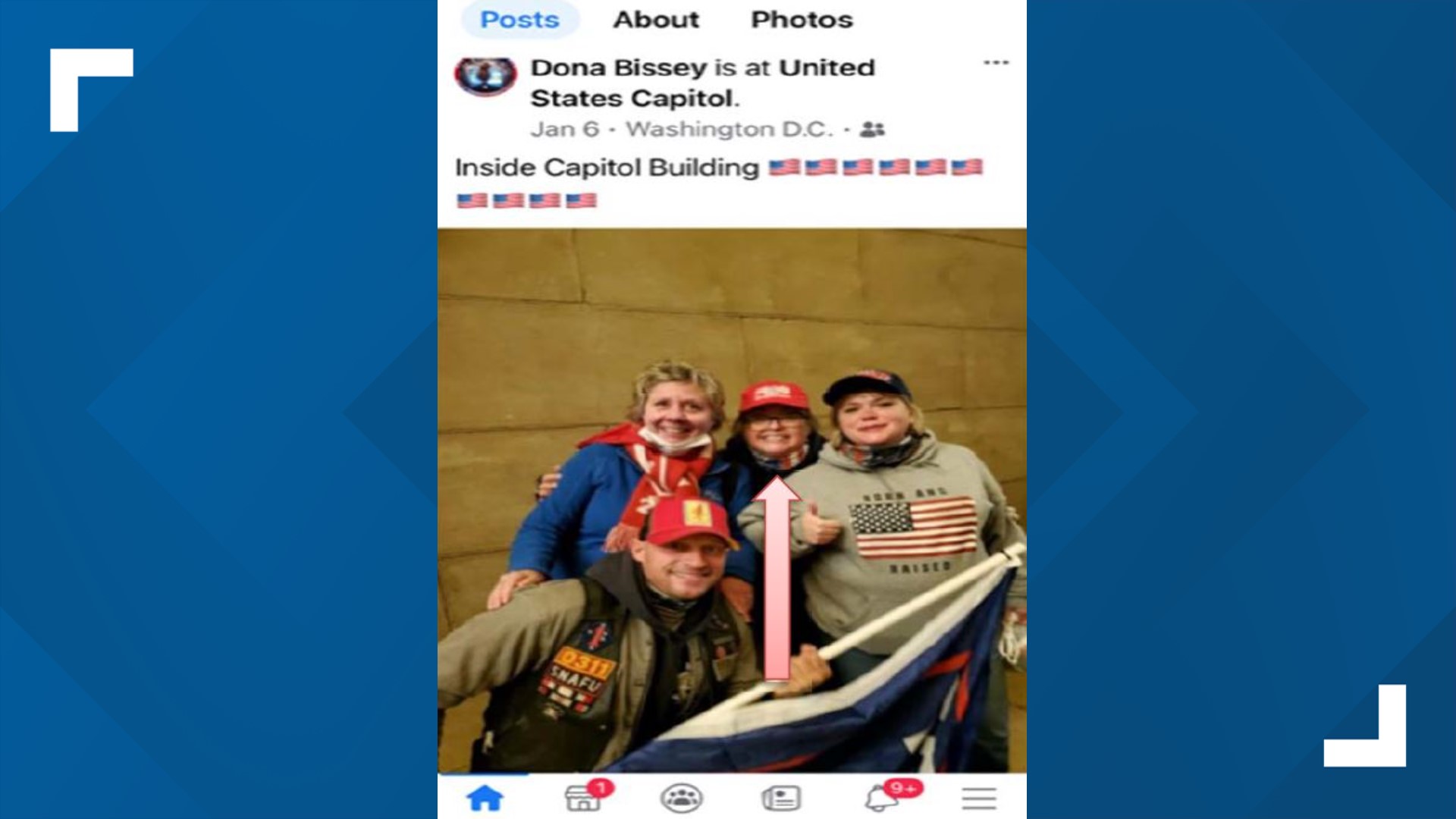 WASHINGTON, D.C., USA — A Bloomfield, Indiana, woman was sentenced to 14 days in jail Tuesday afternoon for taking part in the Jan. 6 Capitol riot. Dona Sue Bissey, 52, will also have to pay $500 in restitution and complete 60 hours of community service. She will not have probation afterward.

Bissey's attorney, Cara Halverson, asked the judge not to sentence Bissey to jail time because she is against the COVID-19 vaccine and wearing masks, according to WUSA reporter Jordan Fischer. Halverson argued Bissey's doctor had not told her to get vaccinated, but the judge said there was no evidence of that.

The judge said she could not consider Bissey's choice not to get vaccinated against COVID-19 as a reason not to send her to jail.

She initially faced four charges including entering and remaining in a restricted building, two counts connected to disorderly conduct and demonstrating in a Capitol building.

In June, she reached an agreement with prosecutors and on July 19, she pleaded guilty to a misdemeanor charge of parading, demonstrating or picketing in a Capitol building, according to our news partners at the Tribune-Star.

On Oct. 5, the Department of Justice recommended she be sentenced to three years of probation, have to pay $500 in restitution and complete 40 hours of community service. Bissey asked for no more than 18 months of probation.

Bissey was allegedly at the Capitol with Anna Morgan-Lloyd, who was sentenced to three years of probation, 120 hours of community service and a fee of $500 in restitution after admitting to entering the Capitol.

She pleaded guilty to a single misdemeanor charge under a deal with prosecutors.

Investigators laid out the case using the women's comments and photos on Facebook as evidence they were in Washington, D.C., on Jan. 6 and went inside the Capitol.

Credit: FBI
An image from Dona Bissey's FB page presented in federal charging documents against her.

In one comment, the charges say Bissey responded to a question about whether they entered the building: "Yes Ma'am! Probably in the first group of 100-200 people. Picking glass out of my purse."

Her social media posts played a role in the sentencing, with the judge saying had it not been for the legal repercussions that followed, she believed Bissey would not be remorseful about her actions.

"I cannot help but think that, had there been no law enforcement consequences, she would still be proud of her participation in that riot," the judge said.

The charges say she responded to a question about whether she went into any offices by writing, "NO. Just hallway. Not in Rotunda."

The charges say that Morgan-Lloyd also posted photos on her Facebook page and wrote, "I'm here. Best day ever. We stormed the capitol building me and Dona Bissey were in the first 50 people in."

The charges also quote Bissey as writing, "I can tell you even though windows and doors were busted, the Police stood with arms crossed. No force. Some even opened doors and fences. Seen it with my own eyes."

Here is the full report against Bissey and Morgan-Lloyd.