The state attorney has charged 57 people since the unrest in late May. 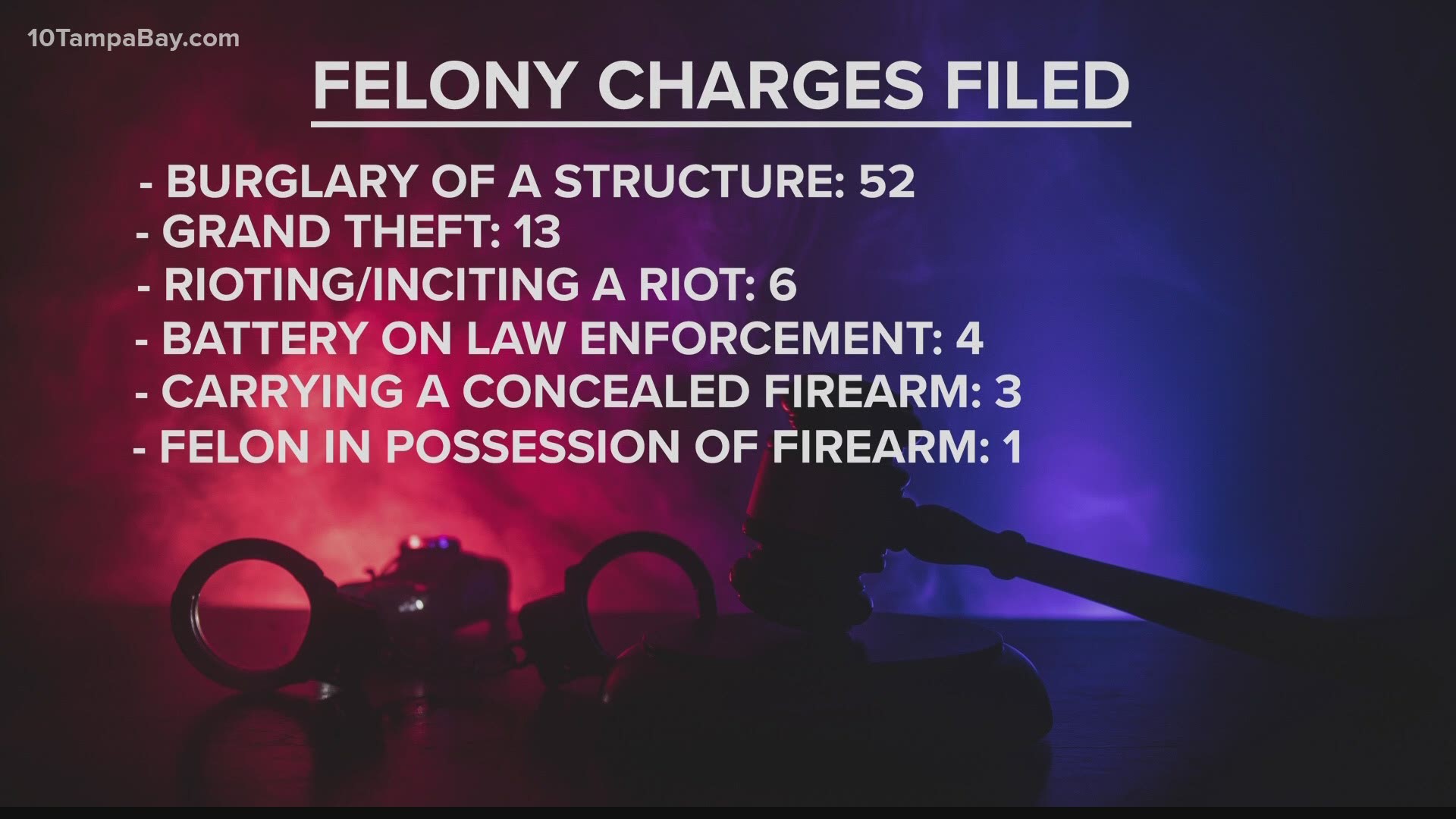 TAMPA, Fla. — Hillsborough State Attorney Andrew Warren announced Friday his office is filing charges against dozens of more people for rioting, looting and other crimes stemming from the unrest around May 30.

The announcement comes even as some local activists are demanding charges against protestors be dropped, but the state attorney says there is a clear distinction between the two groups.

Warren says his office filed charges against 42 additional people bringing the total to 57. They include rioters accused of ransacking stores, causing destruction and fighting with police who tried to arrest them.

“And, we anticipate more charges coming. We’ve been going through some 250 to 300 cases in that first week or so after the rioting and looting from the night of May 30,” Warren said.

The vast majority of the new felony charges filed are for burglary (52), grand theft, (13), rioting (6) and battery on a law enforcement officer (4).

It’s taken more than a month, but Warren said that’s because each case requires a thorough review.

“Not just lengthy arrest reports, but video evidence, witnesses. Law enforcement worked really hard to identify the people responsible for committing these crimes. They’ve done their part. Now it’s time for us to do our part,” he said.

The state attorney says his office is also reviewing the recent case of a man who was arrested after taking part in a demonstration when a car drove into the crowd. That demonstrator ended up being the one taken in by police.

Warren said they are reviewing witness statements and several videos taken at the scene of that incident.

She and 25 others marched through downtown Tampa while Tampa Police Officers followed close behind. The group wants all charges dropped regardless of the severity. They say city officials are missing the point.

"It's like they're stuck on the riots instead of being stuck on injustice. Let the riots go and focus on why the riots happen. Why is America falling apart?," Promise Goodwine said.

But Warren said it’s important for people to distinguish between protesting peacefully and rioting. In fact, he says his office has declined to file charges against peaceful protesters even after arrests had been made -- and even ordered those arrests records be expunged.

The people they have filed charges against, he said, are criminals who robbed jewelry, clothing and convenience stores, set fires and fought with police.

People distracting, said Warren, from an important voice and message.

“And we’re not going to stand for that.”

RELATED: Flames shoot out of Champs Sports store in Tampa