Graydon Young, 54, of Englewood is accused of being affiliated with the far-right anti-government organization known as the Oath Keepers. 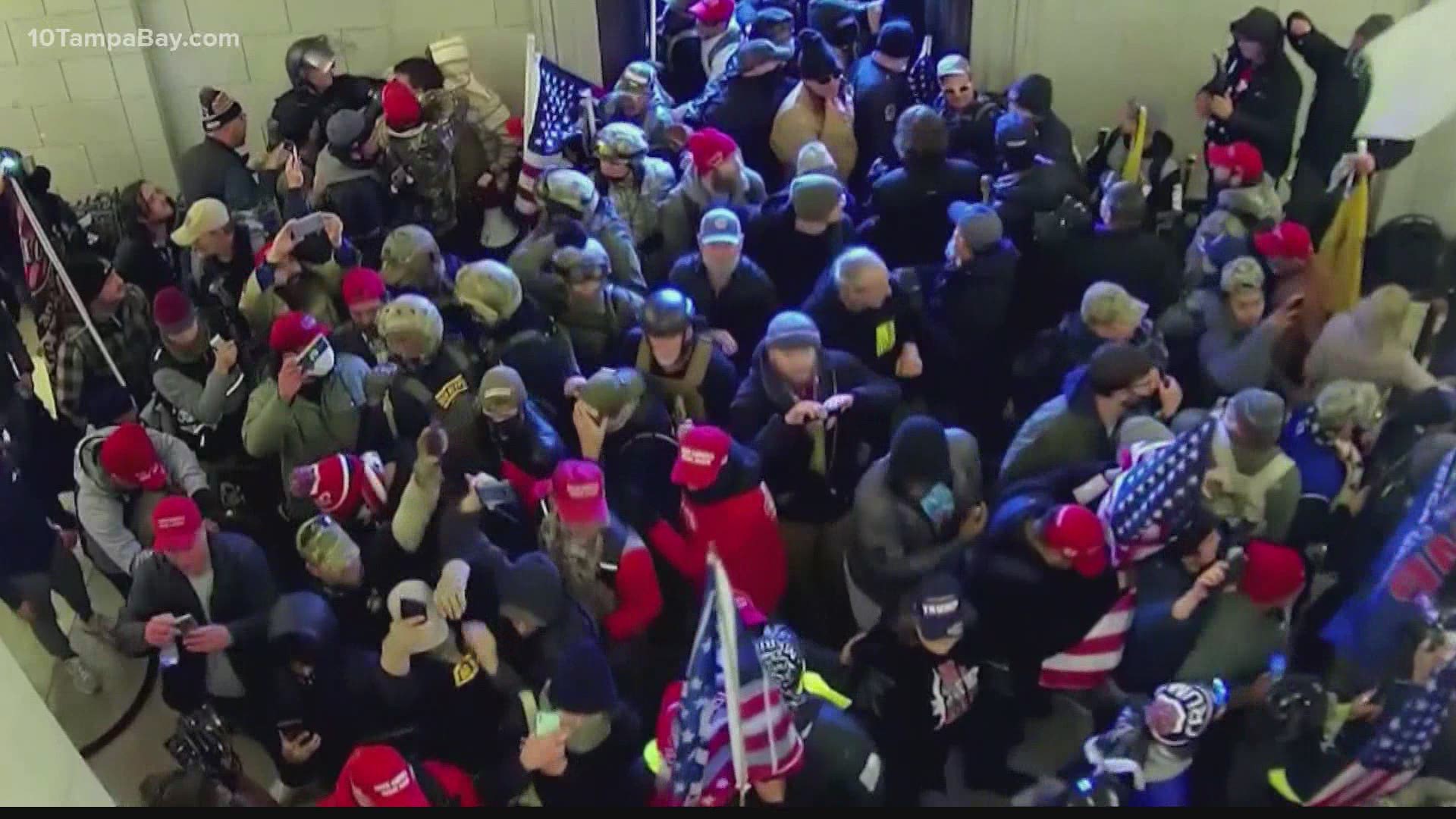 TAMPA, Fla — A man affiliated with the far-right anti-government organization known as the Oath Keepers from Englewood had a court appearance Monday afternoon for charges related to the Jan. 6 Capitol insurrection, according to the Department of Justice.

Graydon Young, 54, is one of three people from Florida who has been indicted, according to a release.

Kelly Meggs, 53, and Connie Meggs, 59, of Dunnellon were arrested last Wednesday in Ocala.

A judge Monday ruled that Young and the Meggs were to be held without bond.

The release says Kelly Meggs is the "self-described leader" of the Oath Keepers' Florida chapter. Connie Meggs, Steele and Young are allegedly members of that chapter, according to the release.

According to the indictment, Kelly and Connie Meggs, Young, Steele and Sandra Parker wore paramilitary gear and joined Watkins and Crowl in "a military-style stack' formation that marched up the center steps to the east side of the U.S. Capitol breached the door at the top, and then stormed the building."

A total of nine people have been added as defendants to the indictment so far, the DOJ says. All have been charged with one count of conspiring to commit an offense against the U.S., one count of depredation against federal government property and unlawful entry, disorderly conduct or violent conduct.

Bennie Parker and Caldwell are charged with obstructing the investigation.

The DOJ says the indictment alleges Kelly Meggs wrote in a December Facebook message “Trump said It’s gonna be wild!!!!!!! It’s gonna be wild!!!!!!! He wants us to make it WILD that’s what he’s saying.  He called us all to the Capitol and wants us to make it wild!!!  Sir Yes Sir!!!  Gentlemen we are heading to DC pack your s***!!”  He allegedly went on to state, “[W]e will have at least 50-100 OK there.”

Young allegedly arranged for firearm and combat training by a Florida company around the same time, according to the indictment.

The release says Kelly Meggs also allegedly said his group wouldn't need to be armed for the attack on the U.S. Capitol because there would be a "heavy QRF 10 Min out[.]" This allegedly referred to "quick reaction force," a law enforcement and military term for an armed unit "capable of rapidly responding to developing situations," according to the DOJ.

The DOJ says the indictment alleges and charges Caldwell and Young of tampering with documents or "proceedings" by un-sending and deleting Facebook content after the events of the attack on the U.S. Capitol.

The FBI says it is still looking for anyone who may have incited or promoted violence of any kind in relation to the U.S. Capitol attack. Anyone with tips or "digital material" is asked to call 1-800-CALL-FBI (800-225-5324) or send photos or video online here.